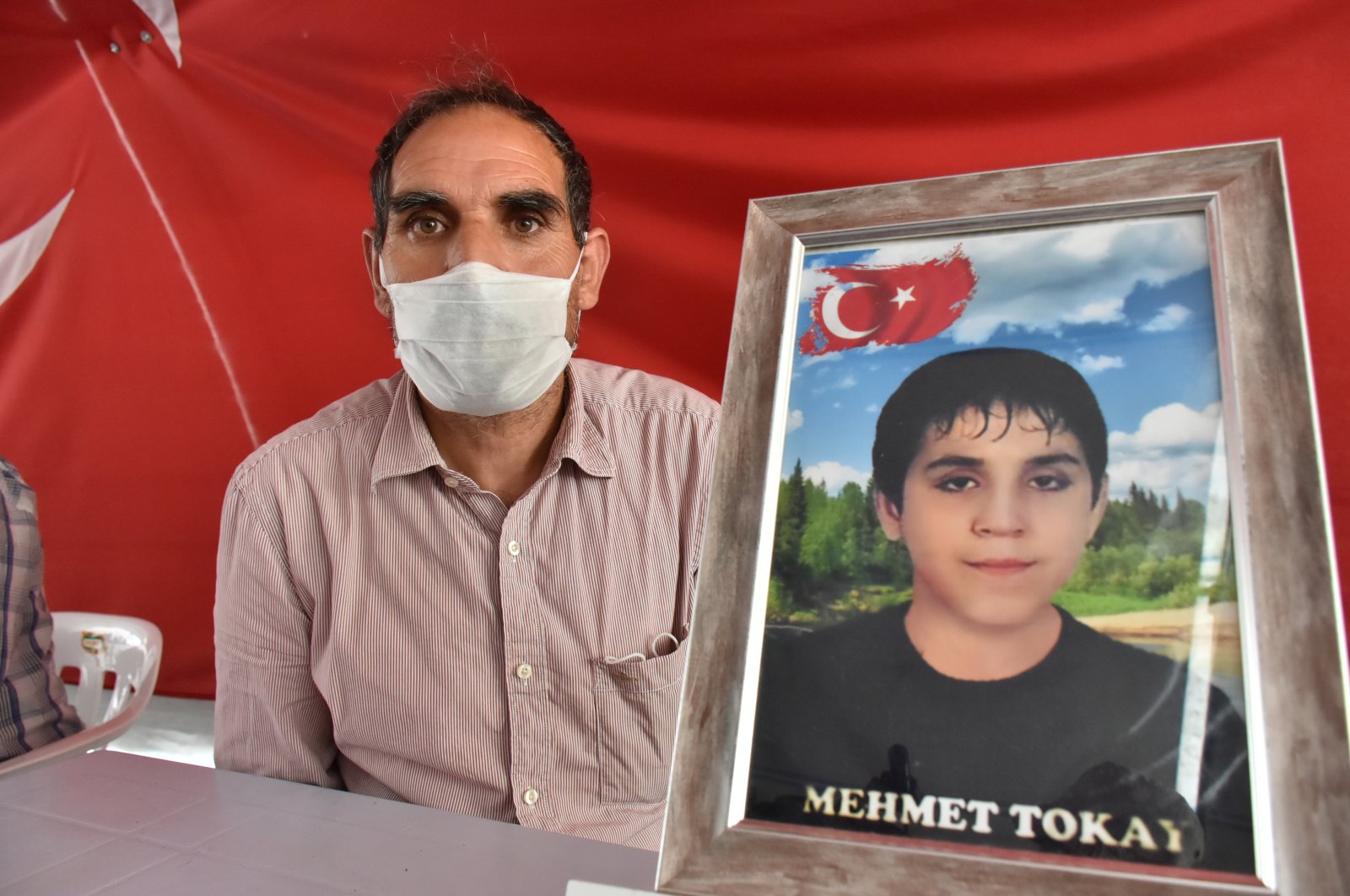 Father Ömer Tokay together with other families continues to protest the PKK and HDP as the sit-in in Diyarbakır province exceeds 300 days, June 28, 2020 (AA Photo)
by DAILY SABAH Jun 28, 2020 1:33 pm
Edited By Dilara Aslan

The sit-in conducted by families whose children were abducted by the PKK terrorist organization has exceeded 300 days as mothers and fathers continue protesting in front of the People's Democratic Party (HDP) headquarters in southeastern Diyarbakır province decisively.

After months, the families still express their determination not to leave the HDP’s door until their children are returned.

“I have been protesting for 300 days,” said father Ömer Tokay who is in Diyarbakır for his son Mehmet, abducted at the age of 14 nine years ago. “I have protested also in 2014 for 120 days. Come home and surrender to the soldiers my son.”

Another father, Aydın Dağtekin, who has been protesting for his son Sedat abducted six years ago in Siirt province, underlined that “no one other than the HDP has abducted my son.”

The HDP is accused by the government of having links to the PKK. The protesting mothers claim the party is responsible for kidnapping or tricking their children to join the terror group. The HDP, long facing public reaction and judicial probes over its ties to the PKK, is under pressure from this growing civilian protest movement. Various groups from around Turkey have supported the Kurdish mothers in their cause, with many paying visits to show their support.

However, the international community remained largely ignorant to the families’ struggle against terrorism while some ambassadors to Ankara paid the families a visit.

The Turkish Foreign Ministry commenting on the U.S.’ Trafficking in Persons Report 2020, criticized the report for not mentioning the protest.

“While children forcefully abducted by the PKK terrorist organization are mentioned in the report, it is a huge deficit that it does not mention the 140 families who have been conducting a sit-in Diyarbakır for 303 days and the 13 families that rejoined their children if not made on purpose,” the ministry said in a written statement Sunday.

The protest started when Hacire Akar who turned up on the doorstep of the HDP’s Diyarbakır office one night. A week later, on Sept. 3, 2019, families inspired by Akar transformed her solo stance into a collective sit-in protest. Akar’s son Mehmet returned home on Aug. 24, giving hope to other families. Since then, the number of protesting mothers has grown as they demand the return of their children, who, they say, were deceived or kidnapped by the terror group.

Canan Kalsın, chairman of the Commission for Gender Equality in the Turkish Parliament, had recently called for the nomination of Akar for the Nobel Peace Prize for making sure that the tragedy of children, torn away from their families, schools and their mothers, was heard and came on the agenda. Kalsın said that awarding Akar would also mean honoring those who have lost their children to terrorism throughout the world.

A significant number of suspected terrorists have started fleeing the PKK and surrendering. More than 235 members surrendered to Turkish security forces in 2019. Once they surrender, former recruits are provided with many opportunities, including the right to an education and the freedom to live without fear and oppression.

Protesting since the first day of the sit-in, mother Songül Altıntaş stressed that 300 days did not pass easily. “Summer is over, fall has come. We have been devastated,” Altıntaş said, urging the HDP to take its hands off these people’s children. To those asking why the families protest, Altıntaş said “Why should not we demand our children from the PKK and HDP?”

Even the global coronavirus pandemic did not discourage the families from pursuing their quest for the children abducted by the terrorist organization. While those having chronic illnesses had to pause their sit-in, the rest continued with masks and social distancing.

Necibe Çifçi, a mother whose son Roşat has been taken to the mountains six years ago, told Anadolu Agency (AA) that her other son, Sami, had been killed by the terrorist organization in 2017 for demanding his brother back.

“They took one of my sons to the mountains. They killed my other son in front of my children. I will not leave this tent before I get my child back from the HDP and PKK, I will continue to fight,” Çifçi said, adding that the families receive threats from the HDP.

HDP mayors have also been accused of undermining municipal services, allowing the PKK to dig ditches in the streets and launch attacks on police and soldiers when the terrorist group adopted an urban warfare strategy in July 2015 and ended a two-year reconciliation period. HDP municipalities and their staff were also found to be actively participating in terrorist attacks launched after July 2015.