Turkey mourns for killed soldiers as operations against PKK continue 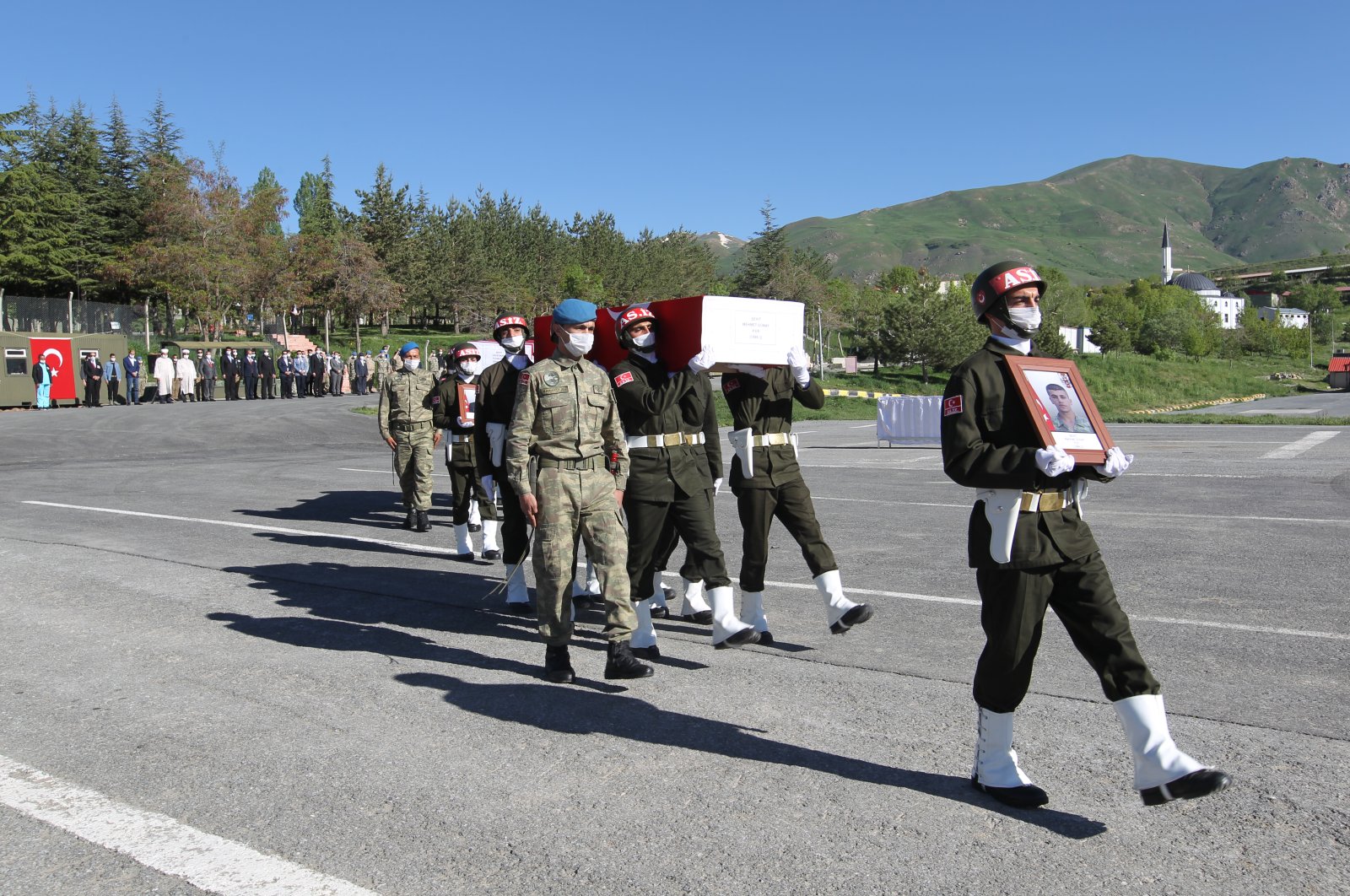 Turkish soldiers conduct a military ceremony for their fellow soldiers killed in a PKK terrorist attack in Hakkari, Turkey, May 31, 2020. (AA)
by DAILY SABAH WITH AA
May 31, 2020 11:37 am

Turkey is mourning for three Turkish soldiers, who were killed by PKK terrorists in southeastern Turkey over the past week, while operations against the terrorist group continue.

President Recep Tayyip Erdoğan on Saturday extended his condolences to the families of the three soldiers and to the Turkish nation.

"Our fight against terrorism will continue uninterruptedly and resolutely until the terror threat to our country ends and the last terrorist is neutralized," he said.

Besides Erdoğan, other top officials in the country have also conveyed their condolences to the families of the soldiers.

Police officer Arslan was killed as a result of an armed attack. Stopping a car for routine controls, Arslan was shot by one of the car's passengers and succumbed to his wounds in the hospital.

On Sunday, a suspect accused of killing Arslan was detained by security forces in Diyarbakır.

During the operations against the terrorist group on Sunday, the Interior Ministry said that three terrorists were killed in eastern Bitlis province.

Interior Minister Süleyman Soylu also confirmed the killing of the terrorists in a social media statement.

Later in the day, a statement from Turkey's Ministry of the Interior revealed that two of the suspects who were killed were listed in the gray category of the ministry's most wanted terrorists list with a bounty of TL 500,000 ($73,300) on their heads. The ministry also stated that one of the terrorists was "Kendal," code-named Veysel Altun, who was a suspected perpetrator of an attack in Bitlis last month that took the life of Gendarmerie Major Zafer Akkuş.

"Your revenge has been taken, rest in peace hero Gendarmerie Major Zafer Akkuş," said Soylu from his Twitter account, confirming the killing of the terrorist. Previously, on July 20, Soylu attended the funeral of the major in the northern province of Samsun.

The other gray category terrorist who was killed was Adem Çelebi, code-named "Şoreş Tatvan."

The Turkish Armed Forces (TSK) also carry out cross-border operations in northern Iraq, a region where PKK terrorists have hideouts and bases where they carry out attacks on Turkey. The operations intensified in July 2018 and gradually became routine.

The terrorists were killed in airstrikes in the Haftanin and Zap regions after they were detected through reconnaissance and surveillance activities, the ministry said on Twitter.

"Our operations will continue until the last terrorist is neutralized," it added.