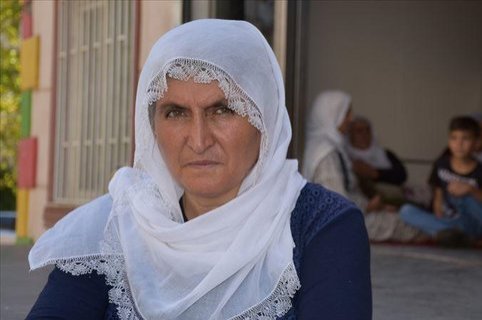 Hacire Akar performs a sit-in against the PKK in southeastern Diyarbakır, Turkey in this undated photo. (AA File Photo)
by Dilara Aslan May 27, 2020 12:47 pm
Edited By Gabriela Garver
RECOMMENDED

A mother devoting herself to rescue her child from the claws of terrorism is the most innocent and dignified act in history, said Canan Kalsın, chairman of the Commission for Gender Equality in the Turkish Parliament, describing the ongoing sit-in protest against the PKK terrorist organization, in Turkey's southeastern Diyarbakır province.

“Despite threats, despite harsh weather conditions and despite the coronavirus pandemic, these mothers continue their struggle with hope so that other families do not have to experience the same tragic events. We have to stand by them,” Kalsın told Daily Sabah.

Dozens of mothers are protesting the kidnapping of their children by the PKK, in front of the pro-PKK Peoples' Democratic Party (HDP) provincial building in Diyarbakır. For 268 days now, these families have been seeking justice for their children, weathering all obstacles and continuing their fight.

“Some of these mothers do not even know if their children are still alive or not,” Kalsın said, adding that this is “the greatest violence that can be conducted against women and the society.”

Underlining that this protest put forth motherly love and the braveness of mothers, Kalsın denounced these terrorist acts.

The sit-in protests by the Kurdish parents and families are seen as a reaction against the outlawed PKK, a terror group that has abducted and recruited their children, as well as the HDP, a political party that many of these families view as being in league with the PKK.

Since then, the number of protesting mothers has grown as they demand the return of their children, who, they say, were deceived or kidnapped by the terror group. The protesters camping outside the offices of the HDP vow to stay until every child is brought back.

Referring to the abducted children, Kalsın elaborated that “these children cannot rejoin their families and lose their lives at a young age while the children of others (leading PKK members) live in luxury elsewhere.”

Kalsın also noted a similar protest taking place in Germany, where a mother seeks to take her child back from the PKK. Staging a protest in front of the Federal Assembly Brandenburg for three months, Maide T. wants the return of her daughter Nilüfer, 20, who left home for school on Nov. 12 and has not been heard from since. "I want to make voices of families whose children have been kidnapped by the terrorist organization PKK to be heard by European politicians," she said.

“We have to take this fight to Nobel,” Kalsın stressed, saying that Akar, the mother initiating the protest should be nominated for the Nobel Peace Prize of 2021 with her exemplary fight, “this is one of the most important prizes.”

“My call for Akar’s nomination was answered by Mrs. Eronat,” Kalsın said, referring to Oya Eronat, a Diyarbakır deputy from the ruling Justice and Development Party (AK Party) who lost her child to PKK terrorism. Kalsın further explained that together with Eronat she would launch and carry out the process of nomination in September.

Kalsın said that awarding Akar would also mean honoring those who have lost their children to terrorism throughout the world.

“Mother Hacire has enabled that the tragedy of children, torn away from their families, schools and their mothers, is heard and came to the agenda. It has shown what mothers can do to ensure peace and serenity when they want. We reiterate that we support the stance of mothers whose children were forcefully abducted at an early age or tricked into it via manipulation and taken away while we also voice that we stand against all kinds of violence and separatism.”

It was also revealed that her other son, Fırat Akar, was also abducted by PKK terrorists and found dead in the mountains. It turns out that Fırat Akar was executed by the terrorist group four years ago in the Qandil mountains.

The PKK's use of child soldiers in its ranks is not a new phenomenon as it has repeatedly been documented and criticized by international human rights organizations. The group tricks families into giving up their children or kidnaps the children, taking them to training camps, where they are denied contact with their families.

So far, 13 children of the families demanding their return have surrendered to Turkish security forces, which is an indicator that the sit-in is having a significant impact. Many terrorists lack the courage to leave the group because they would face severe punishment if caught. Yet, they are treated well by security forces and offenders in Turkey linked to terrorist groups who surrender are eligible for possible sentence reductions under a repentance law.

In its more than 40-year terror campaign against Turkey, the PKK, listed as a terrorist group by Turkey, the U.S. and European Union, has been responsible for the deaths of 40,000 people, including women, children and infants. The YPG is the PKK's Syrian offshoot.