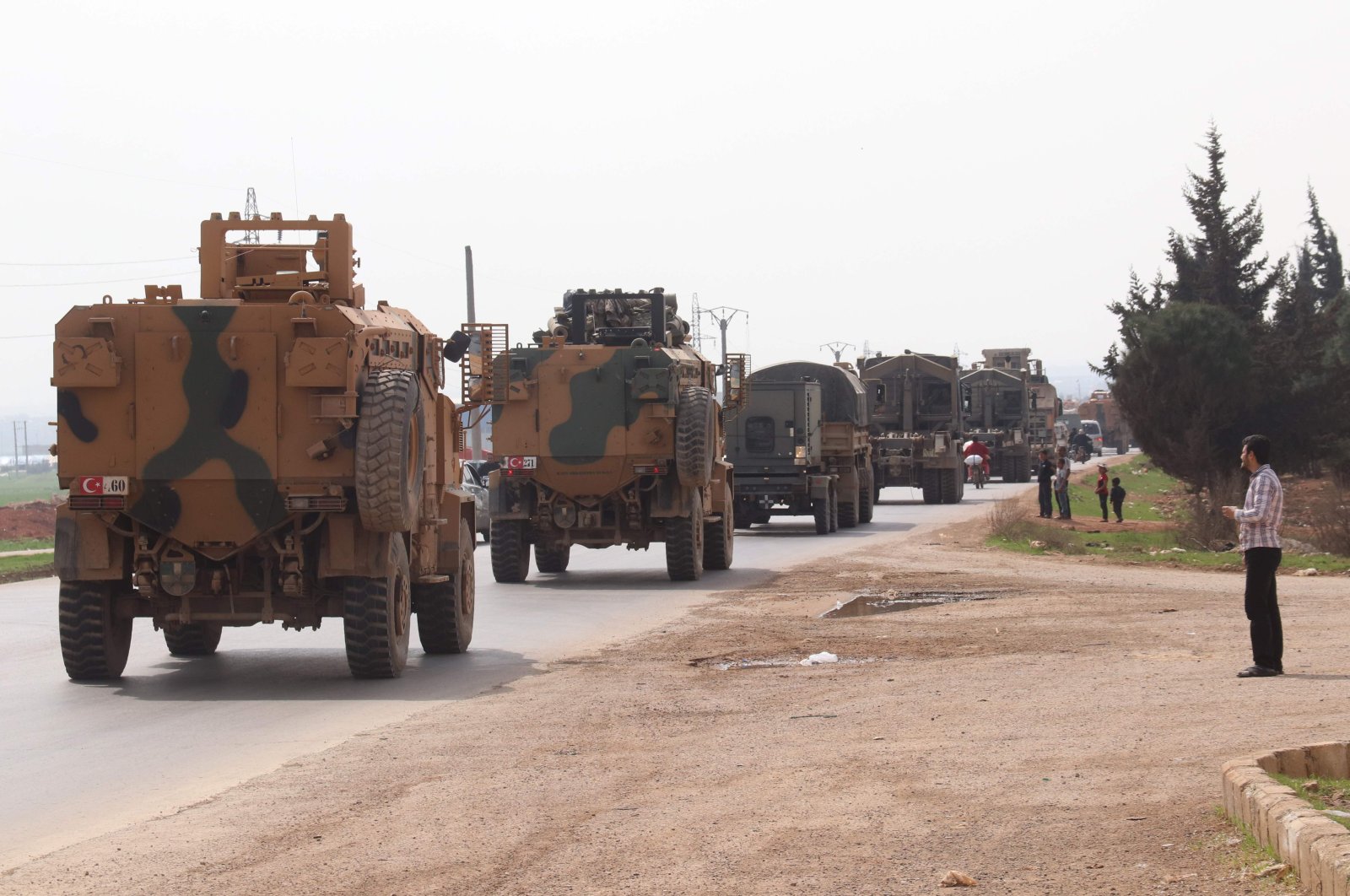 A Turkish military convoy drives near the Syrian town of Kefraya on the highway linking the northwestern Syrian province of Idlib to the Bab al-Hawa border crossing, March 10, 2020. (AFP Photo)
by DAILY SABAH Mar 13, 2020 3:16 pm
RECOMMENDED

Turkish and Russian officials have agreed on the details of a cease-fire in northwest Syria's Idlib region, and joint patrols along the key M4 highway will begin on Sunday, Defense Minister Hulusi Akar said on Friday.

Akar also said that Turkey and Russia will establish joint coordination centers to monitor the implementation of the agreement after the conclusion of talks with Russian officials in Ankara.

He added there were signs that migration in the region had stopped and returns had begun.

Earlier in the day, the Defense Ministry stated that negotiations with the Russian military delegation on Idlib would continue to be conducted in a positive and constructive manner.

The statement also noted that troops at the Turkish observation posts would similarly continue to carry out their duties. "There are no issues regarding the observation posts. There have been no violations (of the cease-fire) against observation posts either," a Turkish security official said, adding that no heavy arms or equipment would be withdrawn from the area.

"The point of the observation posts is to end the bloodshed and humanitarian drama. The step taken on March 5 should be seen as a move toward this. There is no such thing as 'an agreement was signed on March 5 so everything is finished,' it has just been frozen," the official told a briefing in the capital Ankara.

A Russian delegation arrived in Ankara on Tuesday to discuss the finer details of the deal.

The official said talks with the Russians had been "positive" and that the first joint patrol would be held on Sunday as planned, adding that groups aiming to interrupt these efforts would be responded to with the measures necessary.

Around 60 Turkish troops have been killed in clashes in the region in the last month, yet the cease-fire has largely held since March 5.

Turkey set up a dozen military observation posts in the Idlib region under a 2018 agreement with Russia, but most of these are now in areas held by Syrian regime forces. Ankara had previously warned that it would push Syrian regime forces back from the area if they did not withdraw.

President Tayyip Erdoğan said on Wednesday Turkey, which has backed a number of Syrian opposition groups, would not shy away from even stronger military action in Idlib if the cease-fire is broken.

The Turkish official also said on Friday that "necessary interventions" would be made against groups aiming to violate the cease-fire.

An offensive by the Bashar Assad regime, backed by Russian airpower, against the last stronghold of opposition groups has drawn strong warnings from President Recep Tayyip Erdoğan.

Turkey remains the host of the most refugees in the world, hosting more than 3.7 million civilians who have fled since the start of the Syrian civil war.