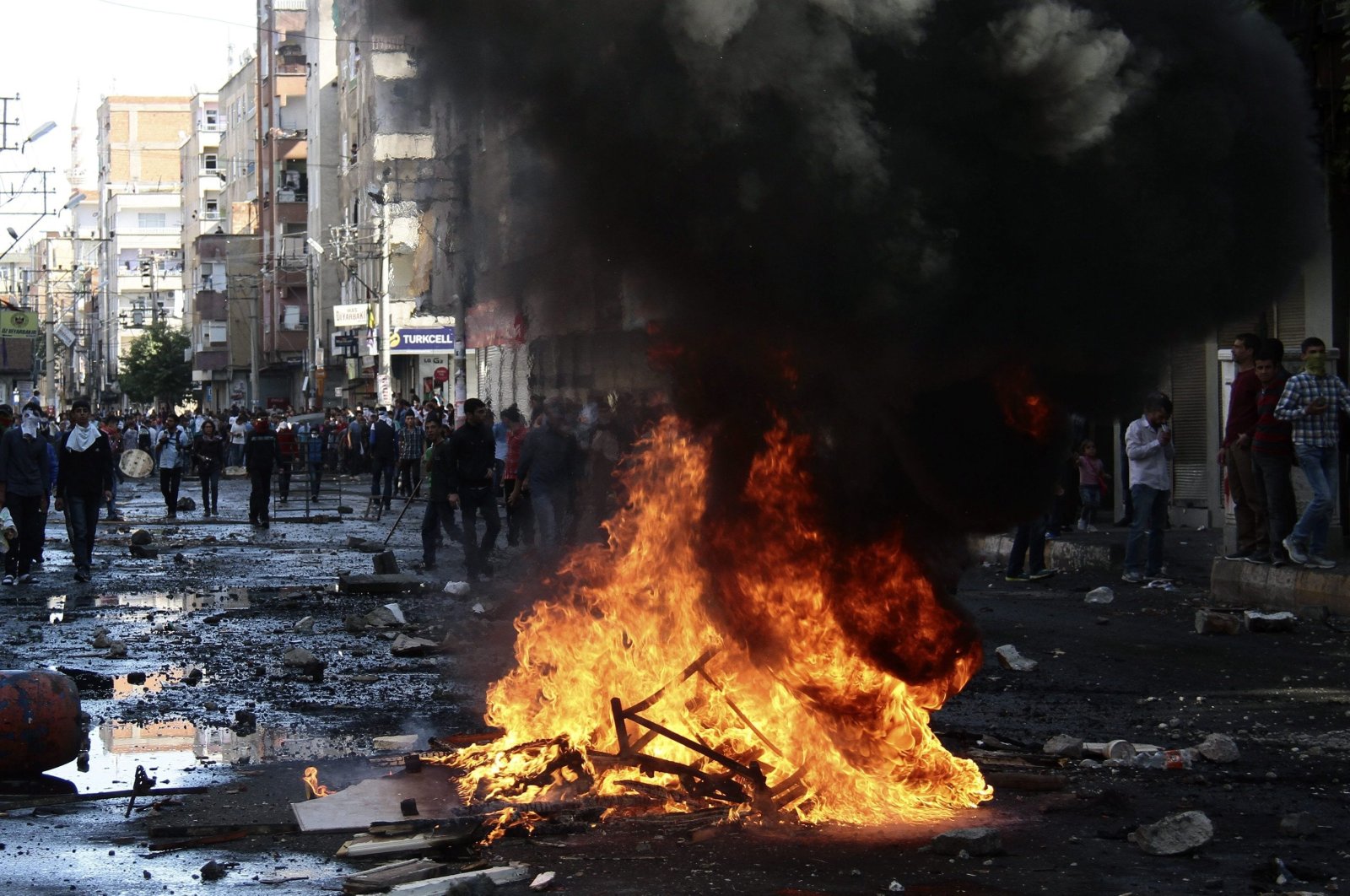 A Turkish prosecutor has prepared a detention warrant for 82 suspects as part of an ongoing probe into incidents during the violent 2014 pro-PKK protests in Syria’s Ain al-Arab (Kobani), security sources said Friday. Later in the day, Turkish security forces arrested more than a dozen suspects over their links to the violence in which 37 people were killed and many more were wounded, including security personnel.

Prosecutors in the capital Ankara said in a written statement that many actors, including PKK terrorist ringleaders, urban agents, HDP members and HDP co-chairs, called on people to take to the streets and commit acts of terrorism.

The statement said that during the protests, roads were blocked and many public buildings, civilian vehicles and homes were damaged by gunfire, Molotov cocktails and fireworks. The warrants seek suspects in seven provinces, the statement added.

The Ankara Public Prosecutor’s office also stated that a record will be prepared to demand the removal of immunity from the seven current HDP deputies within the scope of the investigation.

In 2014, Kobani was completely surrounded by Daesh terrorists. Their advance near the city's villages trapped at least 300,000 civilians in the area, prompting a massive refugee influx into Turkey. Meanwhile, the HDP accused Ankara of failing to support the resistance against Daesh.

Selahattin Demirtaş, the now-detained former co-chair of the HDP, which has had frequent links to the PKK terrorist group, had urged the Kurdish people to take action and pour into the streets of southeastern Turkey on Oct. 6-7. Some 37 people lost their lives in protests that turned into violent clashes between pro and anti-PKK groups.

Among those killed by pro-PKK protesters were four young men working for a charity: Yasin Börü, Hasan Gökgöz, Ahmet Hüseyin Dakak and Riyat Güneş. The charity workers were killed while delivering aid to the poor in Diyarbakır, on Oct. 7, 2014.

The ruling Justice and Development Party's (AK Party) group deputy chairman, Bülent Turan, said that those who preferred to be representatives of terrorist groups rather than democratic politics will eventually pay the price for their crimes.

The Nationalist Movement Party (MHP) welcomed the decision with deputy chair Izzet Ulvi Yönter saying that the process will lead to justice. "I sincerely congratulate our security forces, our prosecutors, our judges and our Turkish state's nobility," he said.

HDP chairman Mithat Sancar told reporters in Ankara, "This operation is not just an assault on the HDP, but on democratic politics and the determination to fight against fascism."

Security sources noted that the PKK exploited the situation in northern Syria to establish local cantons in Afrin, Ain al-Arab and al-Jazeera and weaken the Turkish state by disrupting unity.

“Within the scope of this strategy, the separatist terrorist organization established new organizations called YDG-H (Patriotic Revolutionary Youth Movement), ÖSB (Self-Defense Units) and YPS (Civil Defense Units) to turn settlements in the eastern and southeastern Anatolia regions into canton-like structures in Syria, and transferred terrorists from the countryside to the cities to support these structures,” a security source was quoted as saying. The source continued by noting that the PKK also tried to establish so-called public order teams and courts in cities to create areas under its control within the borders of the country by taking tribute from citizens.

The source noted that the violence started after the HDP’s central executive committee, co-chaired by Demirtaş and Figen Yüksekdağ, released a statement entitled “Emergency Call to Our People: We call on our people to go out and support those who went out to protest the embargo attitude of the AKP (Justice and Development Party) on Kobani.”

Some 761 people, including 326 law enforcement officers and 435 civilians, were injured during the riots, while 197 schools were burned down, 269 public buildings were destroyed, 1,731 homes and workplaces were looted, destroyed or burned, and 1,230 vehicles were wrecked, according to security sources.