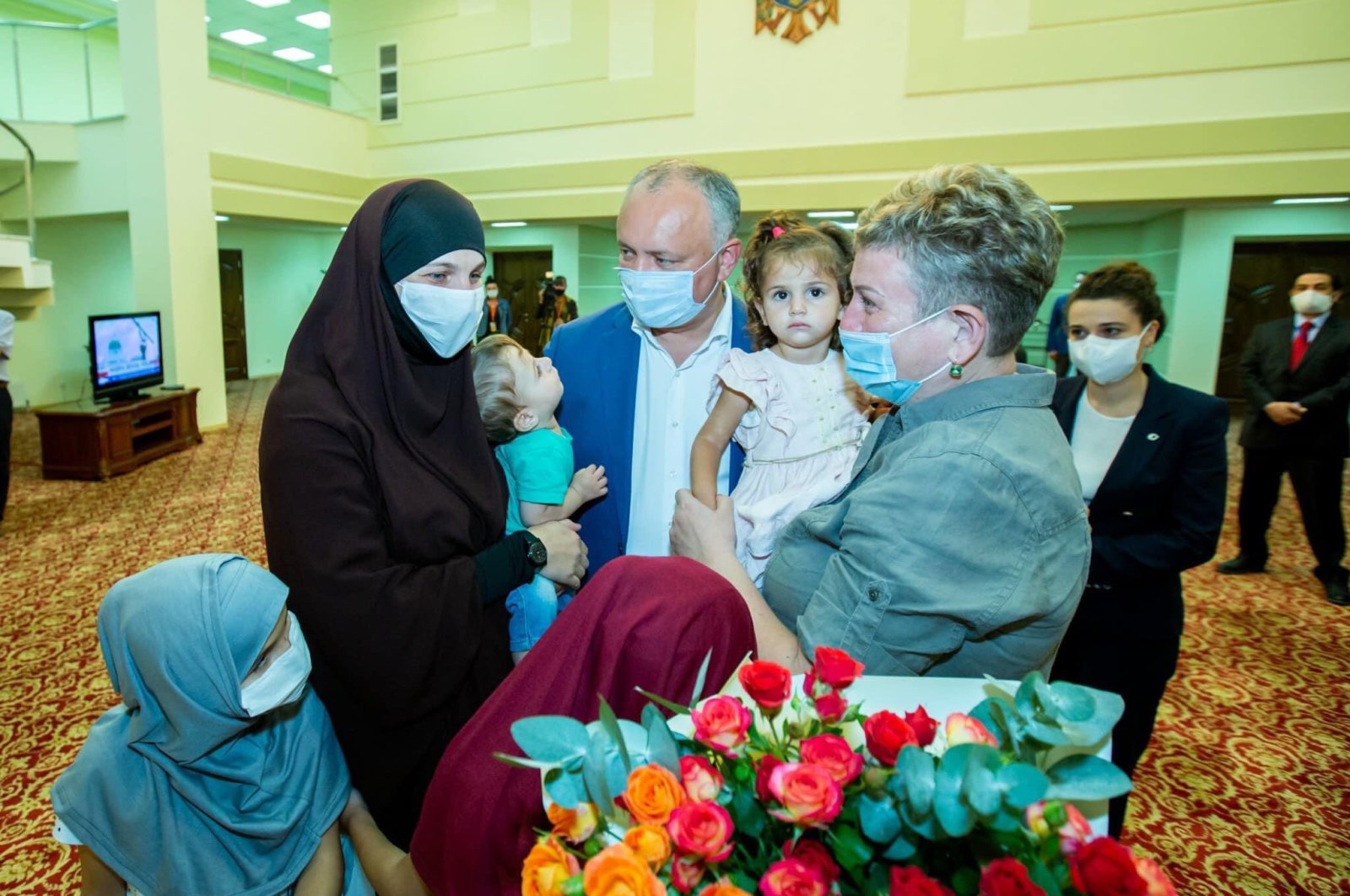 A Moldovan woman and her four children who had been forcefully held by the YPG/PKK terrorist group at al-Hol camp in northeastern Syria have been repatriated in a joint operation with assistance from Turkey’s National Intelligence Organization (MIT), reports said Friday.

Natalia Barkal and her four children had been held in detention by the YPG/PKK since 2019, with Moldovan authorities seeking Turkey’s help to bring the family home.

The Turkish intelligence agency mobilized to repatriate the family upon President Recep Tayyip Erdoğan’s orders after a request for help from Moldovan President Igor Dodon.

In a joint operation with Moldovan authorities on June 6, Turkish intelligence services rescued Barkal and her children from the camp before bringing them to Tal Abyad, in the area overseen by Turkey as part of its Operation Peace Spring in northern Syria.

The family had left Moldova for trade in Aleppo, Syria in 2013. Barkal’s husband was killed in the conflict in 2017, according to the report. The YPG/PKK later rounded up the family, detaining them in a prison near Manbij for 23 days before taking them to the al-Hol camp.

The camp has previously come under fire for its inhumane conditions and serves as a holding place for civilians who escaped the conflict in Deir el-Zour, along with the families of former Daesh members who surrendered and captured terrorists. Most of the civilians were forcefully brought to the camp by the YPG/PKK in April 2017, according to reports.

Several international organizations including the United Nations have repeatedly warned that conditions at the al-Hol camp are worsening every day and have demanded access to the centers where the families of former Daesh members are being held.

Last month, the U.N. rights chief Michelle Bachelet said that about 90,000 Syrians, Iraqis and other "third-country nationals" with presumed family links to Daesh terrorists are being confined in overcrowded displacement camps al-Hol and al-Roj.

Although the third-country nationals are not formally detained and do not face any criminal charges in Syria, they are not allowed to leave the camps, said the U.N. rights office. They are left in legal limbo with limited access to consular services, in potentially life-threatening conditions.

"I sincerely thank Mr. Erdoğan for the coordinated efforts and support provided in carrying out these repatriation operations of the citizens of our country," President Dodon said on Twitter.

Barkal also thanked Turkey for rescuing them from the camp. “I am grateful to the Turkish state, Turkey is a great country,” Barkal said.

MIT has rescued 170 hostages, including 138 Turks, taken captive by different terrorist groups since 2009.

The intelligence service's rescue operations and their successes have made headlines in international media.

In one of its latest operations in May, MIT rescued an Italian aid worker from Somalia.

Silvia Romano, who was kidnapped 18 months ago in East Africa, was rescued in a joint operation by Turkish and Italian intelligence services.

Romano, who was working for the Italian charity, Africa Milele, was taken hostage by gunmen in southeastern Kenya in November 2018. She was found in Somalia, some 30 kilometers (19 miles) outside the capital Mogadishu and was brought back home.

After the incident, the international media, especially the Italian media, said Romano was rescued, thanks to a joint effort by the Turkish, Somali and Italian intelligence services.

Romano is one of the 32 foreigners rescued by the Turkish intelligence service over the past 11 years.

The majority of the 170 hostages were rescued from mostly unstable regions. MIT has carried out most of its rescue operations in Syria.

Conducting its operations in coordination with the related countries' authorities, MIT is often approached by foreign intelligence services for assistance in rescuing their citizens.