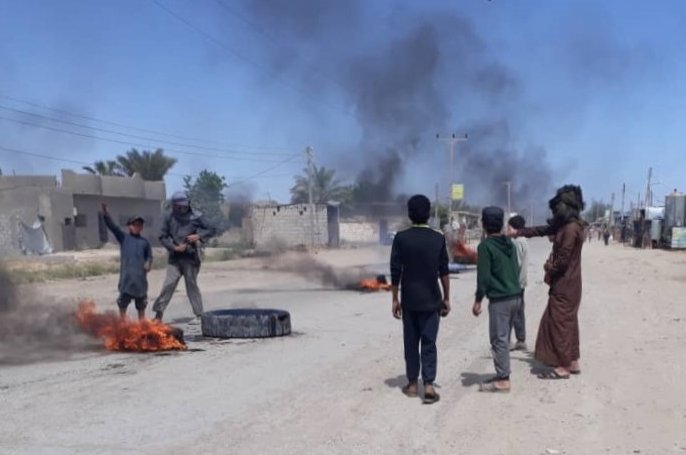 A group of civilians has been protesting the YPG/PKK terrorist organization which occupies Syria's eastern Deir el-Zour province, May 10, 2019. (AA Photo)
by DAILY SABAH WITH AA Aug 21, 2020 12:53 pm
Edited By Dilara Aslan
RECOMMENDED

The YPG/PKK terrorist organization has increased its oppression of the local people in Syria’s eastern Deir el-Zour, mostly of Arabs, after several villages this month launched large-scale protests against the terror group.

According to local sources speaking to Anadolu Agency (AA), the terrorists have doubled down on their oppression of the people living in the villages of al-Havayij, Shuhayl and Zayban. Almost every day, civilians are abducted at so-called checkpoints established by the YPG/PKK in these villages. The abducted civilians are only released in return for ransom money.

The terrorist organization destroyed a water station in Shuhayl district, subjecting residents to water shortages. Moreover, the terrorists have plundered many workplaces, chicken farms and houses belonging to civilians.

Two weeks ago, the Agedat tribe, which lives in an area spanning from Aleppo to the Iraqi border, condemned the terrorist organization's wrongdoing and urged it to retreat from the occupied region. They also called on the U.S.-led coalition to give back the region that has traditionally belonged to Arabs.

Leading Syrian tribes have rejected a mediation proposal by the U.S.-led coalition forces, who held a meeting on Aug. 7.

The YPG/PKK has been trying to change the demographic makeup in northern Syria by forcing local Turkmen, Syriacs, Yazidis and Arabs living there to leave their homes and migrate elsewhere, in a country where hundreds of thousands have already been displaced.

Local people living in areas held by the YPG/PKK have long suffered from the terrorist organization's atrocities. It has a notorious record of human rights abuses, ranging from kidnappings, the recruitment of child soldiers, torture, ethnic cleansing and forced displacement in Syria.

The YPG/PKK has forced young people from areas under its control to join its forces within the so-called "compulsory conscription in the duty of a self-defense law" since 2017. Under this practice, young people between the ages of 18 and 30 are forcefully recruited for nine months, with the possibility of an extension, if necessary. Those who refuse to join the YPG/PKK "face serious repercussions," including imprisonment.