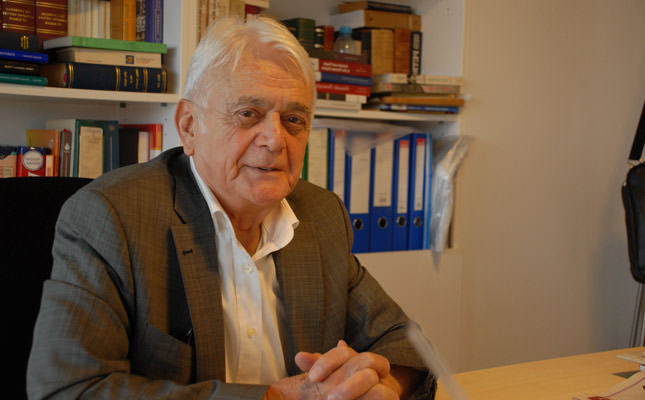 Mehmet Genç, born in 1934, is one of the foremost authorities on Ottoman economic history. He is known to have solved the enigma of the Ottoman financial system of the 17th and 18th centuries

Mehmet Genç, a Ph. D. student at that time, examined the huge amount of data provided by the Ottoman archives, made an enormous attempt to organize them, conducted a precise analysis and arrived at a new understanding of Ottoman economic life. Genç's system came subsequently to be called the "Ottoman mansion system." He is still the foremost authority on Ottoman economic history of the 18th century.

Mehmet Genç was born in the Arhavi district of Artvin, a province in northeastern Turkey, on May 4, 1934. He is the seventh child of his parents. His great-grandfather, Genç Ağa, was a wealthy landlord before the reign of Sultan Mahmud II. When Mahmud II annulled the "Notables" system, Genç's lost everything. Genç said in an interview that his mother had a great influence on him because she would do anything for her children's education. Genç also said that his family was a traditional one, members of which were truly religious individuals.

Genç graduated from Hopa Secondary School before attending Haydarpaşa High School in İstanbul as a boarding student, where he graduated in 1953. One of his teachers was Nihal Atsız, a leading nationalist essayist who paid great attention to Turkish history. Genç, in the above-mentioned interview, recalled that he liked discussing politics and history with his teacher Nihal Atsız. Mahir İz, a scholar of Sufism and Turkish literature, was also among Genç's teachers in Haydarpaşa, but the two were not very close.

As for schoolmates, Genç went to school with Mehmet Çavuşoğlu, the famous Turkish literary historian, and Yaşar Günaydın, a public prosecutor who was later the victim of a political assassination.

Genç was introduced to the ideology of Turkish nationalism in high school. This is significant, since it affected his choices in his educational studies. He preferred the political science faculty rather than mathematics, also thinking that he could support his family better in case he became a "kaymakam," public administrator of a district.

Thus, after graduating from Haydarpaşa High School, he moved to Ankara and attended the Political Sciences Faculty of Ankara University. At Ankara University, Genç made friends with such prominent peers as Sezai Karakoç and Cemal Süreya, the poets who started the "İkinci Yeni" (Second New) movement, Mete Tunçay and Taner Timur, leftist historians, and Mehmet Şevket Eygi, a famous columnist. He remembers that he used to pray in the Mosque of the Political Science Faculty together with Karakoç and Eygi.

He graduated from the faculty in 1958.

After his graduation, Genç began to work as a public servant. First, he worked as an intern for the Ankara Governor's Office, and then he became Deputy Governor of a small district, Şereflikoçhisar, in Ankara.

Making of a decent historian

Genç says that his family's economic condition became more comfortable thanks to the growth in the tea industry that was started by the Democrat Party Cabinet in the Black Sea region in the 1950s. This new situation made him feel freer than ever, and thus, he decided to study economic history. Genç began studying the history of economics under the supervision of Ömer Lütfi Barkan, who was then and still is, the legend of the discipline in Turkey.

Our young scholar was curious about the economic history of the Ottoman State. So he chose a research topic in line with this interest: the transformation of the Ottoman State against the backdrop of Industrial Revolution that was occurring in the West. For his research, he first read the writings of travelers, ambassadors and tradesmen, on the Ottoman economy written in French. After that, he read the writings of other Westerners that were translated into French. Genç thought that the data from writers from Britain and the United States concerning Ottoman economic life were more realistic and quantitative.

Genç spent three years reading French resources and another three years learning and reading in English. However, all that reading in two major Western languages on the Ottoman economic history did not satisfy the young scholar. Therefore, he turned to the huge Ottoman archives.

Meanwhile, his adviser, Barkan, tried to make him complete his research by saying: "Please try to end your study. Do what you can, relying on what you have at hand." Yet, decency and meticulousness did not let the young scholar finish or present a superficial thesis. He worked as an economic history expert at the Turkish Economic History Institute at İstanbul University for 17 years, from 1965 to 1982, and continued his cautious studies.

A false legend: the 350 year regression of the Ottomans

Genç solved the enigma of the Ottoman financial system of the 17th and 18th centuries. According to Genç's theory, the Ottoman State gave up collecting taxes via the efforts of central accountants. Instead, they began granting tax-collecting authorization to certain contractors called "mültezim," by which they both controlled the financial stability of the state and enhanced domestic production.

Genç thinks that the Ottoman State used this system as a guiding instrument of economic development. Thus, the so-called historiographical legend that the last 350 years of the Ottoman State was a period of regression and collapse is a complete fantasy. Though the Ottomans were no mercantilists, they resisted the mercantilist policies of the West via the privatization of domestic taxes paid by producers. The state obliged the tax collectors to pay more, and the tax collectors pushed producers to produce more; thus, economic regression could be overcome, and the Ottoman State ensured its economic stability for centuries even after epic failures in warfare.

Genç published his articles on the economic history of the Ottoman State starting in 1973. He attended various national and international scientific gatherings, including seminars, conferences and symposiums. He worked as an adviser to Turkish Radio and Television between 1985 and 1988. He also began lecturing in the Sociology Department of İstanbul University in 1985. He retired from the latter job in 2002.

Genç received the title of Honorary Doctor of Arts in General Sociology and Methodology from Istanbul University in 1996. Many of his articles have been published in a number of journals in Turkish, English, French and Greek. An important selection of his articles are included in "Osmanlı İmparatorluğu'nda Devlet ve Ekonomi" (State and Economy in the Ottoman Empire) published in 2000. The Union of Turkish Writers awarded Genç with the "Thought Prize" in 2001 for this book.

Mehmet Genç has been working as an instructor in state universities and private fund colleges in Istanbul since his retirement.