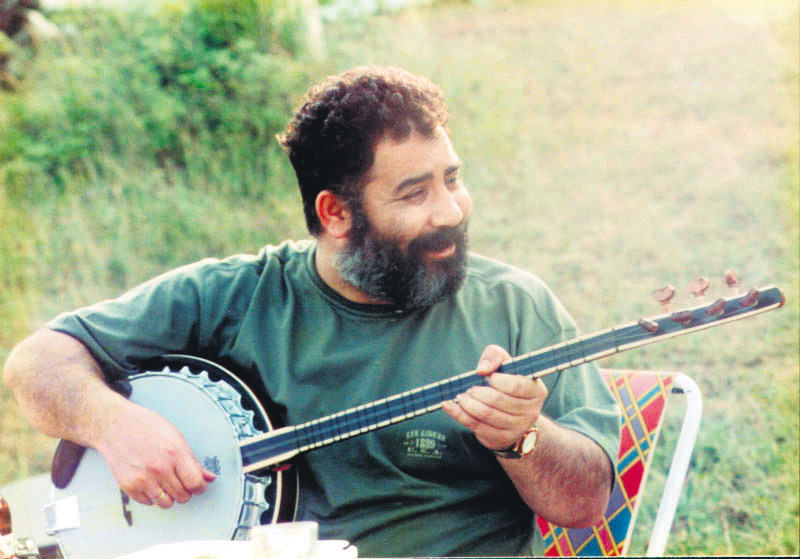 Kaya never played his bau011flama gently. He wanted to show his reactions against the oppressive conditions of life. Indeed, his style of playing the bau011flama was not standard, but rude to some extent.
by Hakan Arslanbenzer Apr 17, 2015 12:00 am

Ahmet Kaya (1957-2000), one of the most popular protest singers of the 1980s and 1990s, despite gaining a huge popularity, attracted negative attention from a section of society due to the political tension over the Kurdish issue

Unlike in developed Western countries, protest music in Turkey does not rely on irony but directly involves politics. Turkish protest music looks like the "Nueva Cancion" (the new song) of Latin America. There are many similarities between Turkish "Özgün Müzik" (original music) and the Nueva Cancion. Both were born under the strict rule of domestic juntas; thus, both had revolutionary tendencies, and the audiences of both have been revolutionaries themselves.

Ahmet Kaya was an exception in Turkish revolutionary music, since he could transfer feeling in his songs to the masses. Although in the first years of his career, a small number of people, including leftist revolutionary youth, constituted the main social environment for his music, after he moved into the mass media in the 1990s, he became a popular music icon among Turkish youth.

It's interesting that Kaya became a popular culture icon, as he was an iconoclast himself.

Kaya was born on Oct. 28, 1957, in Malatya, as the fifth and the last child of a Turkish mother and a Kurdish father. Kaya's father was originally from Adıyaman and moved to Malatya to get a job. He was working in a state factory in Malatya when Ahmet was born. The family -- the parents and five kids -- were living in a very small house that belonged to the factory.

Ahmet was a free soul. At age four, he sold his grandfather's fruits to a grocer to get money for a movie ticket. He used to sing local folk songs all the time, though his family and neighbors were not fond of listening to him sing. At age six, his father presented him a gift, which was a bağlama (Turkish lute). Nevertheless, this did not change his fate; he loved to play his bağlama though his relatives were trying not to hear his catastrophic music. Once he said, "I was playing a folk song then, but I realized that the song should be played with notes years after that."

At age nine, he began playing and singing on special nights held by the social department of his father's factory. He visited Gaziantep with his father for such a special night on Labor Day in the late 1960s. Meanwhile, he was working at a music store where he met revolutionaries for the very first time.

The Kaya family moved to Kocamustafapaşa in İstanbul in 1972 for economic reasons, and 15-year-old Ahmet was shocked by the city's urban culture. He wanted to adapt to it and began imitating his schoolmates.

However, that was not easy: His family had fallen into poverty since his father's retirement, and his pension was insufficient for the whole family. Thus, Ahmet left school so he could contribute money to his family.

Ahmet was accustomed to revolutionaries from his Malatya years, but he witnessed and learned much more about being a revolutionary in Istanbul. He seemed destined to become a revolutionary since he was from a poor, working class family that moved to the modern urban city of İstanbul from the eastern part of the country.

Ahmet learned about street life after he left school and began working. The streets could teach an enthusiastic, curious young man like Kaya hard facts and opportunities. Kaya was always proud that he came from the streets. He struggled against the hard facts and tried to make the most of his opportunities.

Ahmet wanted to find a way of building a life for himself. The Public Science Association, a leftist cultural organization, provided him with an opportunity to present his very personal style of playing bağlama and singing. He wanted to be a musician. One day, he attended a concert by Ruhi Su, the great bağlama player, at Bosphorus University. After the concert, the young man asked the master to show him his method of playing the bağlama. As Ahmet was playing, Ruhi Su took the bağlama out of his hands, and said: "Don't play it like you're riding a horse. You can't fight with the bağlama. It should be played gently."

Kaya never played his bağlama gently. He wanted to show his reactions against the oppressive conditions of life. Indeed, his style of playing the bağlama was not standard, but rude to some extent. But listeners loved that rudeness. Kaya began playing at Revolutionary Nights in various cities in Turkey together with his friends from the Public Science Association. He married Emine from the same association after he completed his 18 months of military service in 1978-79.

After the military coup

The revolutionary mood of the 1970s changed on the night of Sept. 12, 1980. The military coup wiped every adversary away, and people found themselves politically in the dark. Ahmet was not among those arrested and tortured. However, he was very lonely and poor.

In 1981, Ahmet lost his father, which brought great sorrow to him since his father was the only supporter of his music. But life went on. In 1982, Emine and Ahmet had a daughter who they called Çiğdem (crocus).

The early 1980s were even harder than the 1970s for the masses and for Kaya as well. He divorced his wife, and he was broke and jobless.

At some point, Kaya decided to be rebellious and make officials arrest and jail him. He wanted to be jailed, but not for long. So, his debut album, "Ağlama Bebeğim" (Baby Don't Cry), in 1985 included three kinds of songs. The first kind was revolutionary songs, which constituted the majority of the album. The second was a folk song from Karacaoğlan, the famous Turkish bard of the 17th century. The third was a march from Mehmet Akif with national and Islamic colors in it. Due to the revolutionary songs Kaya was arrested, but the folk song and the march from Akif helped limit his stay in jail.

Meanwhile, Kaya met Yusuf Hayaloğlu, who would write lyrics for him until the end of his life and whose sister, Gülten, he would marry.

Kaya made a second album in 1985: "Acılara Tutunmak" (Embracing the Grief). The two albums in the same year introduced him to a revolutionary type of audience. Both albums mainly included poems composed by leftist poets such as Nazım Hikmet, Sabahattin Ali, et cetera. Kaya loved to compose poems. His musical interpretations of political poems were loved by many people.

In 1986, Kaya made his third album: "Şafak Türküsü" (Song of the Dawn). It mainly relied on poems by Nevzat Çelik, a young leftist revolutionary serving a life sentence in prison.

Years chased years, albums chased albums, and in the early 1990s, Kaya became a popular cultural figure. Private TV channels and music producers wanted him, and he wanted them, too. However, he was asked to be less political and have a more popular attitude. He made fewer political songs after 1990, but did not completely abandon his revolutionary stance.

His public concerts now embraced not just leftists and revolutionaries but also anybody who loved his songs. He made two live concert albums, too, which are among the best live albums of Turkish popular music.

After Kaya became a celebrity, the tabloid press became interested in him. He was invited to the Award Night held by the Tabloid Press Journalists Association. He made a short speech in which he said, "I will include a Kurdish song on my new album," which caused a wild reaction among some singers and journalists.

A day later, the Hürriyet newspaper published a photograph showing Kaya on stage with a PKK flag. Thus, he was sued for supporting terrorism, and he felt obliged to leave Turkey for voluntary exile in France. Hürriyet made faux news, accusing him of saying, "I left my car in the bustards' country," which he later refuted, saying: "I did not say anything like that. What I said was that I couldn't even drive a car in my home country because of three bustards." This phony news resulted in another investigation by the public prosecutor. Some local administrations in Turkey prohibited his albums from being sold in music stores.

On Nov. 16, 2000, Ahmet Kaya lovers experienced a great shock upon learning of his sudden death in Paris while working on his next album: "Hoşçakalın Gözüm, Biraz da Sen Ağla" (Goodbye my dear, It's your turn to cry).

Ahmet Kaya was buried in Pere Lachaise Cemetery in Paris after a crowded funeral. He left 24 albums behind, seven of which were released posthumously.
Last Update: Apr 17, 2015 10:31 pm
RELATED TOPICS