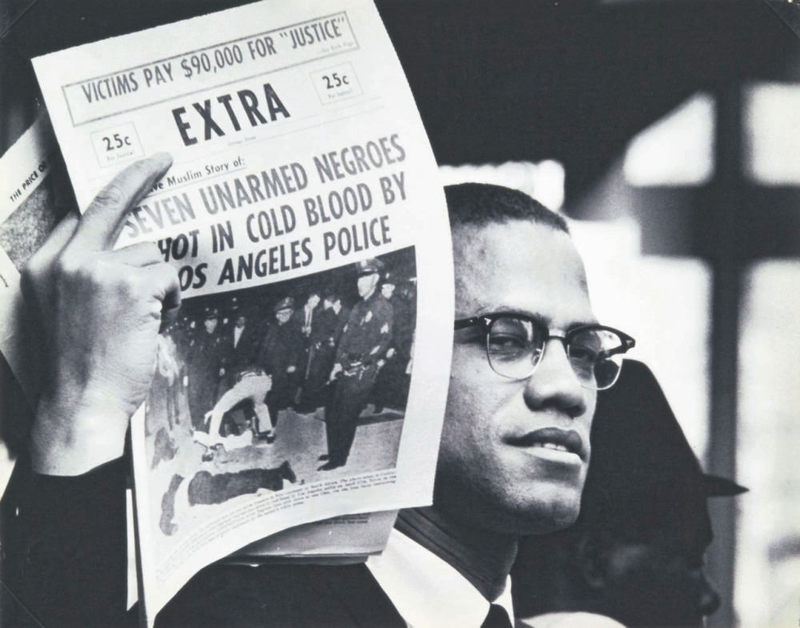 Malcolm X, one of the most influential African-American figures in history, fought racism and the discrimination against black people as a black Muslim leader until he was assasinated at the age of 39 in New York

A wider understanding of Islam was enough evidence in the eyes of many American citizens to believe that they were standing at the dawn of a revolutionary age. From the top to the bottom - in other words, from the President John F. Kennedy to the poorest black people of the Deep South -many people gave their best effort to realize the dream of revolution. Some paid for their enthusiasm for freedom and action for civil rights with their lives, like Kennedy, who was assassinated in Dallas, Texas in the winter of 1963.

Assassinations, or street executions, are as old as the idea of revolution. Being killed or imprisoned and tortured is often the cost of being a revolutionary. U.S. history is full of such assassinations of those who struggled for freedom for the disadvantaged, whether they be Christian, Muslim, leftist, black Americans or American Indians.

Of all of the assassinated revolutionary Americans, three men are unforgettable: Kennedy, Martin Luther King and Malcolm X. Malcolm X in particular has become a legend in the Islamic world as well as in the world of black Americans in the U.S.

Malcolm X was born Malcolm Little on May 19, 1925 in Omaha, Nebraska. His father, Earl Little, was a Baptist minister and a supporter of Marcus Garvey's Black Nationalist Movement. His mother, Louise Norton Little, was a homemaker who gave birth to eight children.

The family had to move twice due to the threats they faced because of Earl's political activism. Malcolm was just four years old when their house was burned down by a racist mob in Michigan, and his father was killed two years after that. Police reports stated that both were accidents, although the family accused anti-black groups.

Malcolm grew up without parents since his mother Louise suffered a mental breakdown after her husband was killed and was committed to a mental institution in 1937. Family friends took care of Malcolm and his siblings after they lost their parents. Though Malcolm was a good student and the only black child in his class, he left school when he was 15. Later he told a story of how his English teacher once asked him what he wanted to be after school and made fun of him when he said he wanted to be a lawyer.

Malcolm and his close friend, Malcolm "Shorty" Jarvis, moved to Boston and began to make a living based on crime. The duo became acquainted with Boston's criminal underground, soon turning to selling drugs. They frequented nightclubs, used drugs and stole money and sold drugs in order to finance their flamboyant lifestyle. The friends were earning easy money, and spending it was even easier.

In 1946, the highlife of young Malcolm Little came to an end when he was arrested, charged and sentenced to 10 years in prison for armed robbery. He served seven years behind bars before he was released on parole.

In order to pass the time during his imprisonment and catch up with his lost education, Malcolm began reading books in the prison library. He met a fellow convict named John Bembry who greatly influenced his reading and thinking. He later mentioned John Bembry as "the first man I had ever seen command total respect ... with words." This is an interesting statement since Malcolm X was one of the greatest orators America has ever seen, who was also to go on to commanded total respect with words.

Living and reading in prison changed Malcolm dramatically. He was as angry as before, but now he began to think about the things that were making him angry.

The members of the Nation of Islam approached him during his time in prison and he soon became one of them. He was a good learner and had a sincere and loyal character, all of which attracted attention.

Also, his brother Reginald visited him in prison and talked about his own conversion to the Nation of Islam.

The leader of the Nation of Islam, Elijah Muhammad, propounded unique teachings that Malcolm studied and began to apply to his life. Muhammad's main concern was political power, which was the biggest topic of political discussions of that period. He taught black Muslims that whites did not allow blacks to obtain the power they required to survive as an honorable people. He asked for a separate state for a unique, black American, Muslim society. As will be summarized, his ideology was Black Nationalism through the Nation of Islam.

In 1952, Malcolm was released from prison and changed his surname. He discarded the name "Little," thinking that it was a slave surname, and took the last name "X," implying that he would have no name before the salvation of the black Muslim people was accomplished.

In a very short time, Malcolm X became the face of the Nation of Islam thanks to his convincing speeches. Intelligent and articulate, Malcolm was appointed as a minister and national spokesman for the Nation of Islam. Muhammad also charged him with establishing new mosques in cities such as Detroit, Michigan, and Harlem. Malcolm utilized newspaper columns as well as radio and television to communicate the Nation of Islam's message across the U.S. His charisma, drive and conviction attracted an astounding number of new members. Malcolm X was largely credited with increasing the membership in the Nation of Islam from 400 in 1952 to 40,000 in 1960.

He was now a media magnet. While this was good for propaganda, the FBI began chasing Malcolm X personally in addition to the fact that they had already infiltrated the Nation of Islam. One of the FBI agents was even acting as his bodyguard. He was bugged and wiretapped by the FBI everywhere he visited or stayed. They followed his speeches and meetings with secret cameras.

By the early 1960s, he had emerged as a leading voice of a radicalized wing of the Civil Rights Movement, presenting an alternative to Dr. Martin Luther King Jr.'s vision of a racially integrated society achieved by peaceful means. Dr. King was highly critical of what he viewed as Malcolm X's destructive demagoguery. "I feel that Malcolm has done himself and our people a great disservice," King once said.

The political and philosophical difference between Malcolm X and the Dr. King was not as traumatic as his separation from Muhammad and the Nation of Islam. Malcolm X was disillusioned by the moral inconsistency of Muhammad, whom he regarded as a living prophet. Besides, Muhammad wanted to restrict Malcolm X's speeches because of their political severity. These two factors brought about a total separation between the leader and the orator. In 1964, Malcolm X was no longer a member of the Nation of Islam.

A wider understanding of Islam

After leaving the Nation of Islam, Malcolm X paid a long visit to North Africa and the Middle East, including Mecca where he performed the hajj. Malcolm X's hajj was fruitful since he learned to place the American Civil Rights Movement in the wider context of post-colonialism and received a wider understanding of Islam. Earlier he had thought that Islam was the religion of only black people. However, now he realized that Islam embraces people from every race and class all over the world.

This was a great step for him. I believe that we owe the Malcolm X legend to that widening of understanding of his religion. He was alone, but not lonely. Though he felt betrayed and abandoned by his own community in the U.S, he was now part of the Muslim community of all countries and belonging to all times. Coming from a separate river, he arrived at an ocean.

During the hajj, he changed his name again and received a traditional Muslim, el-Hajj Malik el-Shabazz, which carries references both to his Sunni Islamic understanding and also to his ancestors in Africa.

After his epiphany, he lived for a while in Mecca and then returned to the U.S. less angry and more hopeful. He now believed that racism in America should be eliminated with peaceful solutions and not with conflict and violence. "The true brotherhood I had seen had influenced me to recognize that anger can blind human vision," he said. "America is the first country ... that can actually have a bloodless revolution."

The tragedy is that Malcolm X was assassinated on Feb. 21, 1965 by members of the Nation of Islam. The autopsy showed that he had 21 gunshot wounds, which is an indication of the kind of hatred he faced in his last days.

Malcolm X's legacy has grown since his death. There are many books about his life, and he has been portrayed in more than 10 films. May 19 is commemorated as Malcolm X Day in several countries around the world.
Last Update: May 22, 2015 10:22 pm
RELATED TOPICS