Yahya Kemal Beyatlı: Between the old and the new 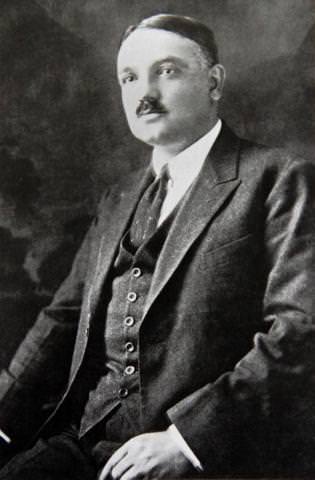 Born to a bureaucratic Ottoman family in Skopje, poet and diplomat Yahya Kemal Beyatlı was said to have lived a bohemian life while his work adopted both nationalist and conservative elements

Late 19th century Ottoman poetry was concerned with a debate between modernity and tradition that looked like a quarrel between the ancients and moderns in France. Eventually, the moderns won the battle. However, whether they were really writing modern poetry is still debated among literary historians and critics.

The generation of Turkish poets born in the 1870s and 1880s, those in school during the modernity battles among the major poets, is the direct outcome of the above-mentioned literary battle. They were born eager to develop a plain poetic discourse close to the daily speech of real people and a national understanding of poetry and literature. They all felt that it was their duty to achieve both goals.

Two major poets of the first quarter of the 20th century, Mehmet Akif and Yahya Kemal, developed a new kind of poetry relying on the plain Turkish of everyday life. Yet they achieved this by utilizing different styles. Though both used ancient meters, Akif spoke in a more fluent but a less plain manner while Beyatlı's Turkish is more understandable, but his speech is not as natural.

Akif determined the poetic discourse until the end of the 1920s. After that, Yahya Kemal became the most prominent poet in the poetry circles of the young Turkish Republic.

Yahya Kemal was born Ahmet Agah on Dec. 2, 1884, in Üsküp - now Skopje in Macedonia - to an Ottoman bureaucrat family that settled there after the conquest of the Balkans. His father, İbrahim Naci Bey, was the mayor of Üsküp and later worked as a judge in İzmir. His mother, Nakiye Hanım, was the niece of Galip Bey of Leskofça - now Leskovac, Serbia.

The Beyatlı surname comes from Şehsuvar Pasha, who was the beg of a sanjak during the reign of Sultan Mustafa III.

Yahya Kemal was first schooled in Üsküp before his family was obliged to move to Salonika - now Thessaloniki, Greece - as the Greco-Turkish War exploded in 1897. However, the family returned to Üsküp because of the poor health of Nakiye Hanım, who died soon after.

The death of his mother greatly affected Yahya Kemal, which can be seen in his poems that included tragic themes like the sorrow of departure, homesickness and missing beloved ones.

Yahya Kemal is said to have led a bohemian lifestyle in Paris. He affirms this in some of his poems mentioning Parisian life. He refers to his years in Paris with such phrases as "Baudelaire worshipping," "magic zest of poetry" and "liberty under the wind of the ideal."

On the other hand, he was also trying to get a good education in Paris. First he learned French in a year at Meaux College, as Abdullah Cevdet of the Young Turks advised him, before he attended the Paris School of Political Sciences where he majored in international relations.

The young poet met his mentor at the School of Political Sciences. Albert Sorel, who was lecturing at the school when the two met, deeply affected the young poet throughout his entire life. Sorel encouraged Yahya Kemal to enroll in the Medieval Turkish department.

Yahya Kemal lived in Paris for nine years until 1912, meeting prominent leaders and members of the Young Turk movement, including Ahmet Rıza, Abdullah Cevdet and Samipaşazade Sezai. He also made friends with such Parisian Turks as Şefik Hüsnü, who would establish and become the leader of the Communist Party of Turkey, and Abdülhak Şinasi Hisar, later a rightist columnist and novelist.

As he moved into his 20s, Yahya Kemal became a more mature intellectual who felt a responsibility for his people and country. On the advice of Sorel he kept reading and learning about Turkish cultural history. Indeed, he reflected these studies in his columns and articles after he returned to Istanbul in 1912.

For me, Yahya Kemal was an amateur historian. "Amateur" here is just to state that he was not a historian by profession. His writings on history include cultural formulas born from nostalgia. This historical and national nostalgia is an integral part of his poetry as well. He was very fond of speaking and writing about the "good old days" of Turkish history. A Yahya Kemal biographer even called this situation "a dream of conquest during the defeat" because most of his nostalgic poems were written when some parts of Turkey, including Istanbul, were under enemy occupation.

A Parisian in Istanbul

Ahmet Hamdi Tanpınar, the famous poet and novelist who attended Yahya Kemal's literary lectures at Istanbul University and was his devoted disciple his entire life, said that his master's tastes and attitudes smelled of Paris. Yahya Kemal remained a Parisian dandy in Istanbul until his death.

However, he took a role in the War of Independence by writing columns in Istanbul newspapers. Before that, he lectured at Istanbul University. In 1921, he published the Dergâh literary periodical with his friend Ahmet Haşim, another prominent poet.

Yahya Kemal was a member of the nationalist-populist movement of 1911-12. His political views and cultural interpretations varied depending on the occasion. In some of his poems and articles he speaks as a straight conservative while some of his lines and speeches reflect a cosmopolitan air. This is because, I think, he learned that he needed to be a nationalist in Paris from French conservatism. His conservatism and nationalism were cosmopolitan.

After the founding of the Republic

Yahya Kemal was among the Turkish representatives at the Treaty of Lausanne negotiations in 1922. In 1923, he moved to Ankara and entered Parliament. After 1926, he was appointed as a minister in the Turkish Embassy in Warsaw and then in Madrid. He was a member of Parliament for three terms from 1934 to 1946. After that, he became the Turkish ambassador in Pakistan and retired in 1949.

Yahya Kemal visited Paris in 1957 due to health issues. However, his health did not recover and he died on Nov. 1, 1958 in Istanbul. He was among the most praised Turkish poets both during his lifetime and posthumously. There are several associations and foundations established to protect and promote his legacy. This is important because Yahya Kemal never married and had no children. His name has been given to many schools, local districts and streets. His understanding of poetry and interpretation of national culture were half-official until recently.
Last Update: Aug 22, 2015 1:50 am
RELATED TOPICS