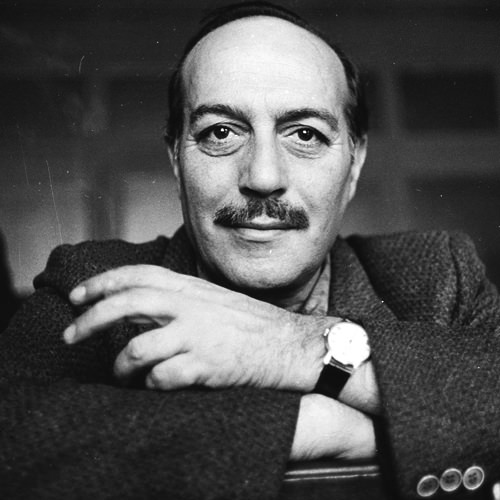 One of the most revered figures in Turkish literature, and known for his loves, passions and relationships, Cemal Süreya successfully represented modernist Turkish poetry with his content and style

Cemal Süreya was born Cemalettin Seber in 1931 in the Pülümür sub-province, which was then under the Erzincan province administration but now is within the borders of Tunceli. Süreya used many pen names including Osman Mazlum, Ali Fakir, Ali Hakir, Dr. Suat Hüseyin, Suna Gün, Hüseyin Karayazı, Adil Fırat, et cetera. He is the eldest of four children. His family was exiled to Bilecik when he was 6 years old. The same year his mother Gülbeyaz, who was pregnant to a fifth child, died because of a miscarriage. His father Hüseyin married another Zaza woman named Esma, who raised Cemal without showing any sign of mercy for years.

The early death of his mother left deep traces on the child heart of little Cemal, which can be observed through some of his master poems such as "Beni Öp Sonra Doğur Beni" (First kiss, then give birth to me), "Burkulmuş Altın Hali Güneşin" (Sprained golden state of the Sun) and "Yüreğin Yaban Argosu" (Wild slang of the Heart), all written in the early 1970s.

Besides, the poet lost his father Hüseyin Seber in 1957 because of a traffic accident. It's a tragic fact that, Süreya wrote a tragicomic poem named "Sizin Hiç Babanız Öldü Mü" (Has your father ever died?) four years before his father's death.

Cemal Süreya once wrote that the modernist Turkish poetry, namely the "İkinci Yeni" (Second New) movement was created by poets coming from public boarding schools. Really, he went to a public boarding school in Istanbul, Haydarpaşa High School, without his father's consent to escape from the torturing stepmother Esma. Meanwhile, Süreya met Seniha Nemli, who would be his first wife later, in the seventh grade.

After graduating from Haydarpaşa High School, Süreya attended at the Finance and Economics Department of the Ankara University Political Sciences Faculty where he would make good friends with such prominent poets and writers of later years as Sezai Karakoç, Muzaffer Erdost, Nihat Kemal Eren and Hasan Basri. He also knew Ece Ayhan and Gülten Akın from Ankara University.

Süreya, Karakoç and Ayhan initiated the modernist movement in Turkish poetry, which would be named by Muzaffer Erdost as "İkinci Yeni" (The Second New). The İkinci Yeni movement was not a planned one with strict rules. They never wrote a common manifesto. However, they had imagism, references to the tradition, daily speech, deformation of rules and forms, and a complicated realism in common, which constituted the stem of the İkinci Yeni revolution in Turkish poetry.

Cemal Süreya published his first poem in Mülkiye magazine, an official periodical of the Political Sciences Faculty, in 1953. Süreya and Karakoç led the İkinci Yeni movement, which was extended by such poets of the day as Tevfik Akdağ, Seyfettin Başçıllar, who were also students at the Political Sciences Faculty, joined by some elder poets as İlhan Berk, Metin Eloğlu, Turgut Uyar, Edip Cansever and Yılmaz Gruda.

The center and the periphery

The İkinci Yeni movement seized the center of the Turkish poetry circle in a very short time after its birth among boarding students of the Political Sciences Faculty of Ankara University. Meanwhile, Cemal Süreya married Seniha Nemli, graduated from the university and began working as an assistant auditor for the Finance Ministry. Cemal and Seniha had a daughter began to have problems in their marriage. They separated after one year, but were officially divorced by the court seven years after they separated.

Süreya visited many cities in Turkey, which helped him in collecting images of Anatolia that he reflected in his poems. He was an urban poet, though he was originally from the country. Once he said: "We were the amateurs of a new life," implying both his being an immigrant and the rapid growth and secularization of the big cities in Turkey in the 1950s under rule of the Democrat Party. Süreya was one of the two major poets combining the urban secular image with the traditional and pure image of the country, the other being Turgut Uyar.

In 1965, Süreya resigned from the Finance Ministry. His plan was to work as a freelance translator while trying to establish a small publishing business. He failed in this like many other Turkish poets, though he could publish the monthly "Papirüs," where he published works by progressive and secularist poets and writers. Because of economic issues, he returned to public service in 1972 and retired in 1982.

Süreya was the bestselling poet of the İkinci Yeni movement due to the humor and eroticism of his poetry. His technique is easy, which is to combine abstract images with the expressions of actual urban relationships. Free sex, which was a very new thing for the people of the 1950s, humorous attitude against officialdom, both coming from the poetry of the Garip (Strange) Movement led by Orhan Veli in the 1940s, constituted a new urbanism in Süreya's early poems. He was not a man of revolution, even in the technique or content of poetry, however he was good at conveying the revolutionary contributions of other poets like Sezai Karakoç and Turgut Uyar to the general poetry audience.

Süreya was also a good essayist and columnist. He was not a perfect critic, according to T.S. Eliot's definition, but he could convince the reader to read his and his peers' new poetry. He also wrote and published letters, journals and portraits, all being among the popular non-fiction for the two-and-a-half decades after his death on Jan. 9, 1990.

Süreya made three other marriages before his early marriage in 1953. He married Zuhal Tekkanat twice and had a son named Memo Emrah, and then married Güngör Demiray and Birsen Sağnak. He also lived together with short story writer Tomris Uyar, who divorced Ülkü Tamer before moving in with Süreya and married Turgut Uyar after that.

Humor and eroticism is overt in his poetry and many readers are fond of it. Süreya, however, has a deeper and darker emotional world inside that cover. Even when he is talking about sex with humor, he concludes a poem with lines such as: "All are broken, my arms and legs ..." or: "I'm afraid of your hands being so white ..."

In short, Süreya was a poet of gesture. He himself was aware of that. He said he did not see himself as a major poet, but an eccentric one. He was really eccentric in all aspects.
RELATED TOPICS