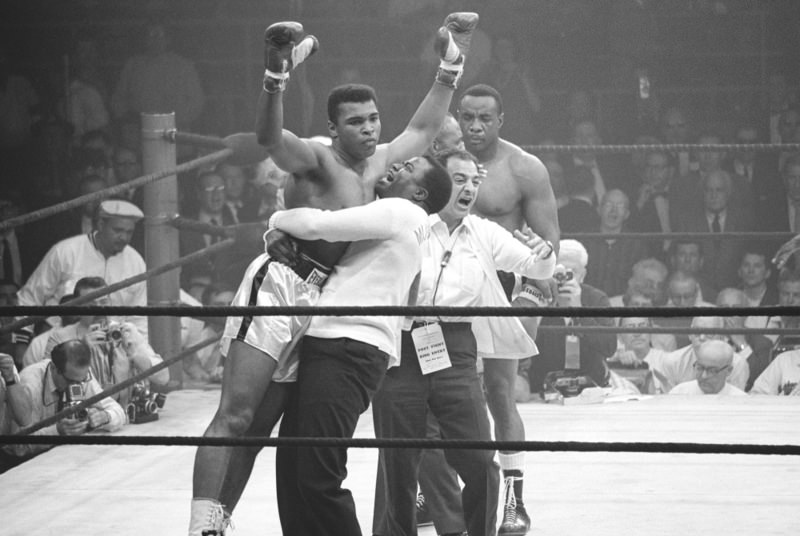 Regarded as the greatest boxer of all time, Muhammad Ali, born Cassius Marcellus Clay, has long been in the spotlight not only for his success in boxing but also his choice of converting to Islam and refusing to fight in the Vietnam war

Crowned "Sportsman of the Century," former professional heavyweight boxer Muhammad Ali is one of the world's most venerated sports personalities thanks to the things he did inside and outside the ring. He was not only a talented boxer, but also a popular culture icon and a social activist, who stood up for freedom of religion and racial equality in the United States, especially in the late 1960s.

Winning a Golden Glove championship in 1959 and an Olympic gold medal in 1960, Ali reached the top at a very early age. During the 1960s, he won all his fights, the majority of them by knockout. However, the world remembers him also for his social stances like his legendary resistance to the Vietnam War and conversion to Islam from Christianity.

Muhammad Ali was born Cassius Marcellus Clay, Jr. on Jan. 17, 1942 in Louisville, Kentucky. He was named after his father as he was the elder of two boys, the other named Rudolph "Rudy" Clay, who later took the name Rahman Ali like his brother. Ali's father, Cassius Marcellus Clay, Sr., painted billboards and signs while his mother Odessa O'Grady Clay was a housemaid. His father was a Methodist, but allowed his wife to bring up his sons as Baptists.

At the age of 12, Cassius's talent for boxing was discovered by a police officer, Joe Martin, after a strange incident. His bike was stolen and he told Martin that he wanted to beat up the thief. "Well, you better learn how to fight before you start challenging people," Martin told him at the time. In addition to being a police officer, Martin also trained young boxers at a local gym.

He started working with Martin to learn how to box, and soon began his boxing career. Later he would be trained by Chuck Podak. He was a successful amateur boxer with 100 wins and only five losses. He won six Kentucky Golden Gloves titles, two national Golden Gloves titles, an Amateur Athletic Union National Title, and the Light Heavyweight Gold Medal in the summer Olympics in 1960 in Rome.

Clay made his professional debut with a win against Tunny Hunsaker in 1960. In three years, he won 19 bouts, 15 by knockout, without any losses. He was young and eager to fight. He thought he was born to become the world champion. He was fighting smart and he was famously fast in the ring. He had begun to collect the rewards from the agony of training hard in the gym.

He was a lucky young man went it came to trainers. Since his skill for boxing was apparent, trainers would come to him. The only thing he had to do was make the right choice and follow the instructions of the best trainer he chose. The best choice he ever made was to hire Angelo Dundee, trainer of champions such as Sugar Ray Leonard and George Foreman, as his cornerman. Dundee would help him win three world championships, among other titles.

Young and winning, Clay was proud of himself and liked to make interesting speeches to the media before fights. He used to belittle his rivals and make confrontational remarks in order to attract attention to himself and the bouts.

In 1963, the world heavyweight title was in the hands of Sonny Liston. Liston was a classical boxer with a criminal past and ties to the mob. Clay and Liston fought in Miami in early 1964. Indeed, the fight between the two began even before the bout started. Clay called Liston an "ugly bear" during the press conference before the game. He even said: "I will donate him to the zoo after I beat him." He also read at the press conference his famous lines, "Float like a butterfly, sting like a bee. Your hands can't hit what your eyes can't see."

As for the actual fight, the two fought for six rounds before Liston did not reply to the bell in the seventh round, which made Clay the new World Heavyweight Champion. Now, he was just 22 years old and at the top of world boxing. The underdog won the battle, and a new story was written. This would be the story of Muhammed Ali, "The Greatest."

A Muslim in the ring

Ali continued his "unbeaten" professional career for two decades, though he lost and re-won his title three times. However, his fame as a boxer would be widened as a social activist, first when he declared his conversion to Islam and became a member of the Nation of Islam in 1964, and second when he refused to join the Vietnam War in 1967.

Ali first heard of the Nation of Islam in 1959 and attend one of its meetings for the first time in 1961. In 1962, he met Malcolm X, the great Muslim activist of the 1960s, with whom he would remain very close friends until his assassination in 1965. In 1964, Ali was accepted by the Nation of Islam and changed his name. In 1975, he made a second conversion and chose Sunni Islam after separating himself from the Nation of Islam. According to his daughter, Ali embraced Sufi practices in his later years.

Though his conversion to Islam caused distress among the press, Ali's real clash with U.S. institutions came when he was called up to join the army to fight in the Vietnam War in 1967. He refused the call, saying: "No Vietcong ever called me nigger," which caused the U.S. authorities to ban him from boxing in U.S. territory. The state of New York suspended his boxing license and he was also sentenced to five years in prison and a $10,000 penalty, which would be overturned by the U.S. Supreme Court in 1971.

In the meantime, Ali could fight with a limited and permanent license. After the appeals process ended in favor of Ali, he returned to the rings and tried to reclaim his title. Until 1981, he won and lost several times in his bid to get back on top.

Personal life and beyond

Ali married four times and had seven daughters and two sons. Two of his daughters are from extramarital affairs and one of his sons is adopted. One of his daughters, Maryum, is an author and rapper, while another one, Laila is an unbeaten boxer with 24 straight wins.

Ali was diagnosed with Parkinson's disease in 1984, which is thought to be related to his boxing past. After his career ended, Ali became a philanthropist and attended many social engagements and was awarded many times in various ways. He was chosen to be a United Nations Messenger of Peace because of his work in developing countries. In 2005, Ali received the Presidential Medal of Freedom from then U.S. President George W. Bush. Ali also received the President's Award from U.S. President Barack Obama for his public service. Ali has a star on the Hollywood Walk of Fame. His star is on the wall rather than the sidewalk upon his request, saying: "I don't want the name Muhammad to be walked on, because it's the prophet's name."
RELATED TOPICS