Hasan Çelebi: Old-school mashq in the age of avant-garde 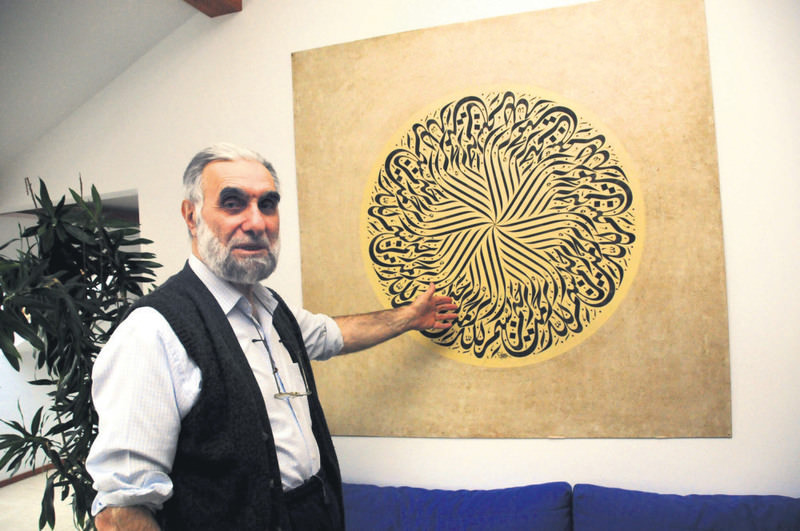 Born in the eastern province of Erzurum, Hasan Çelebi was a man who studied the art of calligraphy in Turkey at a time when Islamic arts were overshadowed. His calligraphy works decorate some of the most important Islamic buildings in the world

The art of Islam ran into a crisis as the world of Islam, led by the Ottoman State, began to suffer a long-enduring crisis, both politically and socially, against the ascending Western European powers. As the Islamic dynasties vanished, art of Islam also experienced decadence. Since art needs stability, financing and protection to flourish, and the Islamic societies couldn't support their artists as usual, the art in the Islamic world was obliged to change or die.

Many of the works have disappeared, including miniature and classical architecture. However, hat (Islamic calligraphy) and Ottoman classical music still endure. Calligraphy has had a long journey throughout the history of Islam with great geographical shifts. It emerged in Mecca and Medina due to the necessity of scripting the Holy Quran, as well as diplomatic and administrative letters. Later, it flourished in the Magreb and North and north-west Africa. It became a discipline in Baghdad and resided there until the Mongol invasion in the 13th century. Finally, Islamic calligraphy found great creators in Amasya and Istanbul beginning in the late 15th century. Sheikh Hamdullah and Hafız Osman established the Ottoman school of calligraphy, which has been sustained by disciples for centuries.

The initial cultural policies of the Turkish Republic were revolutionist, in a bad sense. Islamic calligraphy and Ottoman music were prohibited, though masters and disciples continued making their mashqs within the limited framework of their private lives. The grandeur was caged into poverty. Nevertheless, it became accessible to everyone, since it no longer had value in the eyes of both the popular and official culture.

A poor imam from the East

Since Islamic calligraphy was not considered a respectable art by the urban intellectual circles, the calligraphy masters lost their environment. However, after the Democrat Party introduced moderate policies toward religious people, Muslims began to re-own their old values. And, there were also people who sought to walk on the lonely paths of classical Islamic-Ottoman arts.

Hasan Çelebi, an imam from the İnce Village in the province of Erzurum was one of them. He was born in the month of August in 1937. His family was religious and many of Hasan's male ancestors were sufis and/or imams. His father and grandfather were both literate. Hasan Çelebi's great grandfather, Tahir Efendi, had a strong madrasa education.

When Hasan Çelebi was a child, people all over the world were suffering from poverty and hunger because of WWII. The hard conditions of the time should have affected the soul of the little boy.

Hasan Çelebi began learning and memorizing the Holy Quran, which later would determine his destiny. He loved paper and letters. Yusuf Altaş, a man from his village, helped him to reach the education he needed. Altaş read daily newspapers in the village and had bright children like Hasan Çelebi, who read them too.

Hasan Çelebi quit memorizing the Holy Quran because a modern elementary school opened in his village. Unfortunately, Hasan couldn't attend the school because he had to take care of his family's sheep. He only completed his Quran education in 1951.

Istanbul: Another world, another age

Hasan Çelebi traveled to Istanbul by train in order to attend an underground madrasa there. Though not officially recognized, these madrasas were tolerated by the Democrat Party. After that, Hasan Çelebi would continue his Islamic education in madrasas in Fatih and Üsküdar, both old religious districts of Istanbul. Furthermore, he worked as an imam at a small mosque in Üsküdar beginning in 1956.

Çelebi completed his military duty from 1957-1958, before he began to work as an imam at various mosques both inside and outside of Istanbul. He worked for three years in Yusufeli, Artvin, after the May 27, 1960 military coup.

In 1963, Çelebi was assigned as the imam of the Sultantepe Mosque of Üsküdar in Istanbul. This was his ticket to return back to the city of Islam.

Hasan Çelebi loved writing Islamic letters. He wrote plates for the mosque in Yusufeli. When he was working as the imam of Sultantepe Mosque in Üsküdar, he met a talented stone carver, Yusuf Efendi. This friendship would shape his career, since Yusuf Efendi introduced him to Hamid Aytaç, one of the greatest Islamic calligraphers of the twentieth century, in 1964.

Mashq with the masters of calligraphy

Hasan Çelebi did not leave his master until his death in 1982. The duo created mashq together for eighteen years. Çelebi learned both Thuluth and Naskh calligraphy types over the next decade. He also met other master calligraphers, Necmettin Okyay and Kemal Batanay. He studied masqh with Batanay and learned Riqa and Taliq calligraphy styles from him.

In 1987, Hasan Çelebi retired from his duties at the mosque and used all of his time for calligraphy. He has produced numerous pieces including Jaly (big) plate scripts for monuments in Turkey and other Muslim countries. His calligraphy now ornaments domes, walls and entrances of many mosques and madrasas all over the world. He also renewed and repaired many old scripts in Istanbul mosques.

In 1982, Saudi Arabia invited Hasan Çelebi to improve the calligraphy scripts at the Rawdha Mutahhara (the Mosque of the Prophet Muhammad) in Medina. But, he couldn't get the necessary permission from the Turkish government on time, so, the work was canceled. However, in 1987 he completed scripts for the Quba and Kıblatayn mosques in Saudi Arabia.

Hasan Çelebi opened many personal exhibitions both inside and outside of Turkey, generally under IRCICA (Research Centre for Islamic History, Art, and Culture), beginning with 1980, until this day.

Hasan Çelebi was awarded the Culture and Art Great Prize by the Presidency of the Turkish Republic in 2011.
RELATED TOPICS