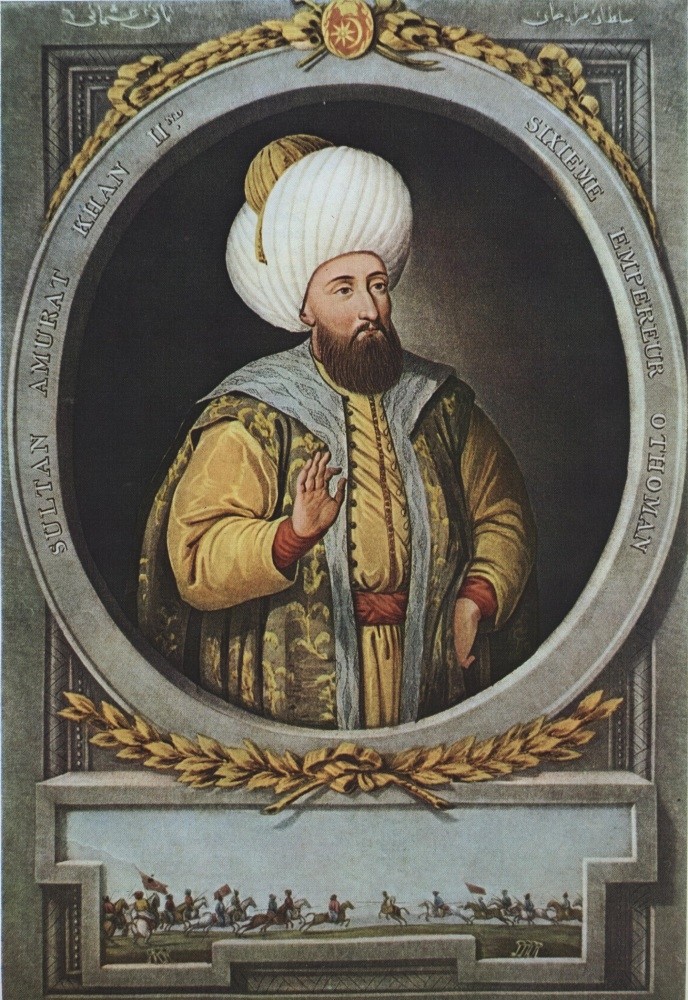 Father of Mehmet II, who conquered Constantinople and started a new era in world history, Murad II was a bold warrior and partly enabled the conquest with his own military successes. He was also a talented hunter and an intellectual, who was fond of the arts

Sultan Mehmed II ("the Conqueror"), who conquered Constantinople and transformed it into Istanbul, is well-known worldwide; however, very few people are aware of the story of Murad II, his father. Could Mehmed have become "the Conqueror" if it was not for his father Murad? Could he really have reached the pearl necklace of the Bosporus if his father had not conquered the Balkans and wiped out the Crusader threat that hung over the heads of his fellow Muslims in the Ottoman lands? Let's examine this question together.

Compared to his father and grandfather, as well as his sons and grandsons, Murad II was in a unique position. First of all, he had a peculiar character. He did not like the throne. What delighted him was wildlife, the arts and conversations with his companions, including every wise man of his time. Some historians have tried to paint a hedonistic portrait of him, neglecting the fact of his being a great ghazi (veteran soldier). Besides, if he was a hedonist, why would he ever leave the throne and chase a country life at all?

Murad Khan, the second of his name, just like his grandfather and namesake Murad Hüdavendigar, was known for his being a just ruler and a great ghazi. He was neither sharp nor hard such as Bayezid I ("Thunderbolt") nor worried and soft like Mehmed I ("Gentleman"). Bayezid was defeated by Tamerlane, which endangered the Ottoman presence as an independent political entity. On the other hand, Mehmed was the successful leader of the Interregnum period, yet could not determine whether he was a bey or a sultan. Mehmed saved the Ottoman throne and even founded the state for the second time. He could not behave with full independence. The Moghul threat was at the door of the Turkish throne. His son Murad would collect the necessary power for the beylik again, thus the Ottomans would become the rising star of Islam.

You cannot help thinking deeply as you read the life story of Murad II. You see him at first glance on his horse leading his fellow ghazis against the wild Crusaders. Then your eyes catch him in a deer-hunt party with his viziers and others. After a while, he fights again. Then he listens to a poet reading his latest poem. In a silent moment, he writes his testament, where he donates whatever he possesses to the poor of Mecca and Medina, two holy cities in Hejaz. Finally, death finds him while he is resting in nature after a severe stroke.

Murad II was born in 1404, and crowned in 1421, when he was just 17. He was obliged to fight with his relatives first, because they claimed the throne and cooperated with the Old Byzantine Empire, an enemy of the Turks. A list of the claimants to the leadership, crusaders and Byzantine associates defeated by Murad Khan should show us that he won wars in the very first years of his sultanate. He both defeated the rival Turkish beys and his Christian counterparts in the Balkans. Murad Khan was a winner.

After winning so many wars, Murad II saw that his enemies in the West decreased to the Hungarian/German king and the Pope. The Christians worried about the Ottoman march onto European soil, and established a wide-ranging Crusade against Murad Khan. However, Murad defeated the Crusader army in Varna in 1444. The Varna victory became the seal of Ottoman rule in southeastern Europe until WWI.

Murad left the throne to his young son Mehmed II after the great Varna victory. Historians do not have much evidence of that event. Yet they have many guesses. Some think that the Great Ghazi was in a depression, as they cannot comprehend that a sultan would waive his rights to the throne. This is completely baseless since Murad showed no hesitation in fighting his enemies during his second rule after his young son Mehmed.

A second guess is that Murad might have thought of preventing confusion by crowning Mehmed earlier since another shahzadeh was being kept in prison in Byzantium.

What is more meaningful is that Murad II fought for 23 years before he first left the throne to his son. The Ottoman Beylik was a ghaza (sacred war) state and even the great Mamluk sultan sent special presents to Murad Khan after his conquests in the Balkans. Every Muslim and Christian was aware of the Ottoman success story during his time.

So, he thought he had done his duty and it was time to leave. He sought to follow the Sunnah of the Prophet Muhammad and begin with the "greater jihad" after so many "small jihads," meaning that he would try to clarify his soul fighting against the temptations of his "nafs."

His testament confirms his lines above. Though popular history tells us about stately instructions by him for his son Mehmed II, his real testament never mentions any stately matters. It rather shows the religious contemplations of an ordinary Muslim in his old age.

Father of the poor

All the Turkish, Arabic and Byzantine historians of his age show that Murad II was mild toward his people, while he showed great fortitude at the warfield. He paid great attention to the institutions of civilization. We understand that war was his obligation, not what he wanted. On the battlefield, he sought peace, not more wars.

In his testament, he asks for a tomb without a ceiling. He writes, "Let the rain fall to my soil." What a poetic testament for such a warrior.

Murad II died in 1451 leaving a widened Ottoman land with many architectural, religious, scientific and artistic institutions behind him. He even left the revenues of the bridges he had have constructed in Ankara and Salonika for the poor of Mecca and Medina.