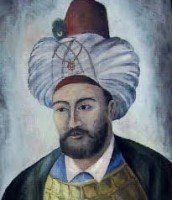 A soldier and diwan poet, who lived in the 16th Ottoman Empire, Taşlıcalı Yahya was known to be the greatest mathnawi poet after Fuzuli in his lifetime. The ‘Elegy for Shahzade Mustafa' is his most famous work

It is not true that Ottoman diwan poets used to write their poems in the palace laying around and avoiding participating in regular life, even though prejudices tell us the exact opposite. The same old prejudice shows that poets who were able to gain the acceptance of the art community and prepare diwan for us could belong to each and every class and occupation. What we mention here as class is the class formed in the city. We emphasize this matter because farmers, who made up 90 percent of Ottoman society, did not even know how to read and write.

Still, when we take a glance at the occupations of diwan poets, we see that ilmiye (one of the four Ottoman institutions that comprised of scholars) has dominance over others. This is normal, because the way to being a diwan poet was literacy, which was directly proportionate to madrasah (school of Islamic knowledge) education. Today, nearly all poets are graduates.

Both carpenters and janissaries wrote poems

Another interesting point is the striking number of poets who were craftsmen and soldiers. There were even some saddlers and carpenters among Ottoman poets. One of the most strange ones were janissary poets. No one would expect a soldier living a life of war to write poems. A janissary writing poems and manawis and collecting those poems in a diwan was not regarded as strange, however, but rather rewarded.

Ottomans had such a great janissary poet that even the TV audience has an idea about him due to Muhteşem Yüzyıl (The Magnificent Century), a TV series about the life of Ottoman sultans). This great poet's name is Taşlıcalı Yahya Beğ, the poet who composed the Elegy for Sehzade Mustafa. "Beğ" is an important title, showing he was the commander of janissaries. In him, we have a ghazi or war veteran who spent a life fighting infidels and rebels.

We will speak on the Elegy for Sehzade Mustafa, yet firstly a close look at this hero's life is required.

'Warrior of a rocky town from a noble family'

No official record as to Yahya Beğ's birthplace and date has been found. According to his poems where he talked about himself, his homeland was "Taşlıca" (Pljevlja), located in the north of today's Montenegro, and he belonged to the Dukagjin family, which was noble and Albanian. In other words, the mother tongue of this poet, who wrote unique poems in Turkish, was not Turkish, which shows Turkish as a language of empire.

The Dukagjin family is estimated to have been Norman in origin and located by Duc Jean in Shkodra. Again, as to these estimations, after moving to this location, they began becoming Albanian. According to Taşlıcalı's own words, Duc Jean and his clan decided to settle in Taşlıca following a military expedition.

The birth date of Yahya Beğ is also uncertain, yet historians generally agree on 1488 or 1489. This janissary poet, who passed away in 1582 after the ages of Sultan Selim the Stern, Suleiman the Magnificent, Selim the Blond and Murad the III, lived a life lasting 93-94 years.

Having been taken to the hearth of Conscript Boys, Yahya was guarded by Şihabüddin Beğ, a man who realized his talent and was also the secretary of the hearth. Thanks to this, he was able to receive lessons from very important scholars and could avoid some of the difficulties of being a janissary. Put differently, he could find adequate time for intellectual activities.

A sword in one hand, a divit in the other

Ottoman poets used to write poems with a quill pen in a box which is called a "divit." They used to sink the pen into the inkwell and write on paper, papyrus or even leather. Taşlıcalı Yahya had two tools of his art: the sword and divit. The first one was for fighting with the enemy; the other for writing kasidas.

His life and poetry were interconnected. When he was 25, he participated in the long military expedition to Egypt along with Sultan Selim the Stern and wrote epic kasidah promoting Selim as a mujahid (a Muslim warrior fighting with infidels). Yahya Beğ's kasidas were mostly unadorned, pure, decided and consistent.

The sultan he loved most was - naturally in a sense - Suleiman the Magnificent, who spent most of his life on the battlefields just like the janissaries under his command. The good thing about this is that Suleiman was both a poet and a warrior too. Also, the 16th century was an age of wars for both West and East; the poems written in that age naturally praised war heroes.

Fight between the real and imaginary

On the one hand Yahya Beğ as a young janissary participated to endless wars and rose in ranks; and on the other, he fought for better positions by dedicating kasidas to commanders and sultans. Once he got lots of compliments from scholars as he was invited to Shayk al-Islam Kemalpaşazade's pavilion, even though he had his "börk" (military helmet) on. However, the execution of Defterdar İskender Çelebi who patronized him hindered his career.

While Taşlıcalı Yahya was standing and reading his poem to Kemalpaşazade, a famous poet of the time, Hayali Bey was present too and was mortified by the young janissary's poem. Then the hostility between the two poets began. Both tried to get closer to the sultan and severely competed with each other. Like their professions and lifestyles, their poetry were different too. Hayali Bey was the master of fancy, affective and lyrical poems as his name implies ("Hayali" means imaginary). In contrast, Taşlıcalı's poems were realistic, bellicose and epic. However, Taşlıcalı could not work behind the scenes like his rival.

The beginning of the end: Elegy for Şehzade Mustafa

Both his rival's tricks and his own sharp tongue brought trouble on Taşlıcalı. He wrote his famous elegy ("mersiye," a poem written after the death of a loved person) for Sehzade Mustafa, who was executed during Nahcivan military expedition. Whereas the elegy did not directly address the sultan who ordered his son's execution, it criticized him indirectly and more importantly, it severely targeted Rüstem Paşa, who was the enemy of Sehzade Mustafa. The elegy is a fascinating poem and a timeless piece of Turkish poetry.

Rüstem got very angry when he heard the elegy and called Taşlıcalı in order to openly reprimand him. Taşlıcalı lost his properties and was exiled by Rüstem. The poet had his revenge years after, when he wrote a "hicviye" -- a critical poem addressing someone -- in the form of an elegy after Rüstem's death.

Taşlıcalı could not recover himself once more in economic terms. His efforts came to nothing and he ultimately went to Tımaşvar Fortress on the border of the Balkans and fought with infidels. Having headed toward being a dervish, the poet died in Bosnia, in Loznica or Dubrovnik according to historians. When he died, he was worn out, weary and introverted.