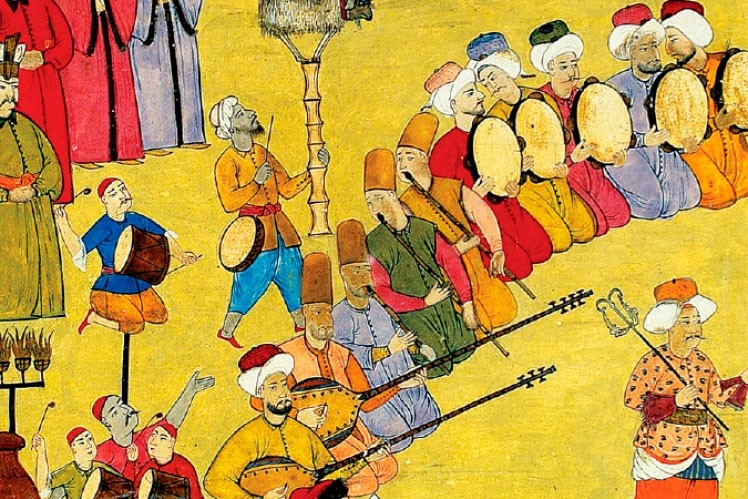 Probably born in Urmiya in present-day Azerbaijan, in 1216, Safi al-Din al-Urmawi is believed to be the first theoretician of maqam music, dividing the octave into 17 notes and naming them

Just like the history of calligraphy and architecture, the history of Islamic music dates back to the pre-Islamic era. Even though Arabs, who were the first respondents of the divine invitation from the Prophet Muhammad, had no idea about the term music, melody types such as "ghina" and "nashid" were common in Hijaz.

It would be appropriate to think about Umm Kulthum, the most famous diva of Egypt, to understand what ghina is. Umm Kulthum was called the "miracle of Arabic ghina". We also should mention Leila Mourad and Asmahan at this point.

Music on the rise

If we set aside the ageless sound of ghina, we see that perfect vocals, instruments and modes emerged and developed centuries before the birth of Islam. This slow process was apparently influenced both by the theory and performance of music. Some have claimed that Turkish music is built on practice, played by ear and has no theory. These arguments do not have a historical basis. Islamic theory of music arose with the first philosophers and within centuries reached a level equal to today's musical theory. When we turned our backs on Arabic, Persian and even old Turkic, we also forgot our classical theory of music.

The very first philosophers took lessons on music theory as well as logic and mathematics from Greek philosophers. Being a composer and performer, Farabi's "The Great Book of Music" played a quite important role in the shaping of musical theory unique to Islamic societies.

However, the great master of music theory was Safi al-Din al-Urmawi, who is still influential. Urmawi lectured on general music theory and produced the knowledge of modes.

Probably born in 1216 in Urmiya in today's Azerbaijan, Urmawi had a rare, talented character. He was a lute player, a musical theoretician and a canonist of the Shafi sect. This abundance and diversity in the 13th century surprises us, especially since it is for an Islamic scholar-artist. If he had lived two centuries ago, he would have been an important canonist, or if he had lived two centuries later, he would have been a famous lute player, but we can never know now. What we know is that Urmawi applied his talent to a relatively untouched field, the knowledge of modes, and had an influence for years.

Urmawi, whose full name is Safi al-Din Abd al-Mumin ibn Yusef ibn Fakhir, went to Baghdad while he was a boy and received his education in Mustansiriya Madrasah. According to his biographers, he had knowledge of Arabic, literature, mathematics, history, calligraphy, debate and dispute and Islamic law. His canonist side was not prominent, and he had accepted himself as a calligrapher, which is true only for his first years of youth. According to Fazlı Arslan, an expert in Islamic music, his value as a music scholar was appreciated long after his death, which is very reasonable since he created an almost new music theory with much less effect than old theoreticians. And it would have been unexpected if his contemporaries had realized his talent.

As with the spirit of that age, Urmawi's talent was discovered and he went to the palace of Caliph Mustasim while very young. Mustasim made use of him in many ways. Contrary to Umayyad caliphs, entertainment was not a priority for Abbasid caliphs. Artists brought to the palace deserved their titles as scholar. And the madrasah was also founded by Abbasids.

Mustasim had two libraries built and appointed Urmawi as their manager. He wrote whichever book he wanted in calligraphy and put them in the library. He also performed music for the caliph. One of his duties of was within the secretariat. Later, he was appointed to the office of private secretary.

One of the interesting points about Urmawi was that even though he witnessed the end of Abbasid Caliphate, he carried on with his career. Although the art of calligraphy, represented by Yaqut al-Mustasimi, faded out after the Mongols occupied Baghdad, music was still shining. The protection of the Persian Juvayni family probably had an important role in this. Yaqut, who would mark a new epoch, was Urmawi's student. Calligraphy would rise again in the Ottoman Empire with the help of Sheikh Hamdullah after centuries. However, music would never go into decline.

The inventor of maqam

The most important contribution of Urmawi to Islamic musical knowledge was his system that divides the octave into 17 notes. These notes were marked by Arabic letters by the composer. These are also mostly equivalent to the notes in Western music. Urmawi himself called these notes dimensions.

His way of finding the notes was through his lute practices. Having calculated all notes from highest to the lowest that can be used in playingt with their mathematical proportions through practices on the lute, he lectured on his system in his two books "Kitab al-Adwar" (Book of Modes) and "Risalah al-Sharafiyah" in a refined style.

These 17 pitches were transformed into series according to a certain logic of melody and what we call maqam emerged. He showed the sequence of many maqams such as tonic, dominant and leading tone with these 17 pitches.

He suggested invaluable ideas about the formation and features of notes and paved the way for later Muslim musicologists and composers. Although his music theory was sometimes neglected in the Republican era, it has now begun to be studied again, which is a godsend when rote learning and chaos in the field of musicology are considered.