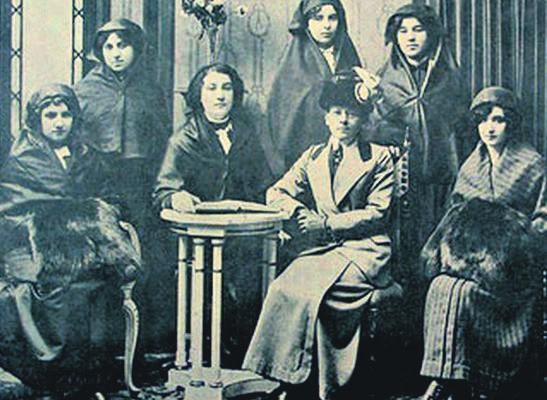 The daughter of a bureaucrat father, Nezihe Muhiddin Tepedelengil was a leading suffragette alongside other powerful women of the 20th century, including Halide Edip Adıvar and Fatma Aliye Topuz, who fought for women's rights

The Ottomans had many female sultans who played major roles in politics. Particularly in the 16th and 17th centuries, women of nobility stepped forward to lead public affairs and even international relations for the empire.

However, it was not until the Second Constitutional Era that the first feminist movement took place in the Ottoman Empire. Some educated Ottoman women began organizing as women's rights activists. Many of them the daughters of prominent bureaucrats, including Nezihe Muhiddin Tepedelengil, Halide Edip Adıvar and Fatma Aliye Topuz, these feminist pioneers were female populists whose main target was to enhance the self-awareness of the empire's women. They published a variety of periodicals to teach women. Furthermore, they began to establish special associations for women, including the Ottoman Welfare Organization for Women, which was the first feminist organization ever founded in the empire.

It is also ironic that the Republican era buried the pioneering feminism of the Ottoman Constitutional era because the defenders of single-party rule kept saying the Ottomans imprisoned women in their homes. Instead, the Republic has widely been credited for giving them rights, including suffrage. While it is true that women won the right to vote during the Republican era, it has always been depicted as a gift from Mustafa Kemal Atatürk to the women of Turkey, not a political right asked for and received by suffragettes.

In fact, Nezihe Muhiddin and her contemporaries founded the first feminist political party, the Women's People Party, three months before Atatürk and his friends established the Republic of Turkey. Unfortunately, the Istanbul Governor's Office did not give the Women's People Party permission to run in the elections, even though they had fulfilled every requirement and submitted their application even before Atatürk's Republican People's Party (CHP). Thus, Nezihe Muhiddin and her friends were obliged to transform their party into a civil association. In other words, the CHP regime stopped the first step of women's activism at that time.

In 1930, Nezihe Muhiddin and Suat Derviş joined the Liberal Republican Party and ran for mayor. However, neither of the two female candidates was successful. In 1935, the regime gave women the right to vote, while Nezihe Muhiddin's association was shut down forever. The regime presumed that there was no longer a need for such an organization without asking the founders, who were the suffragettes of the late Ottoman and early Republican eras.

Nezihe Muhiddin Tepedelengil was born in 1889 in Kandilli, Istanbul. She was the daughter of Muhiddin Bey, a public attorney, and Zehra Hanım, the granddaughter of Ağa Hüseyin Pasha, the first head of the general staff of the Ottoman army. Her only sibling was her brother Faik Muhiddin Adam.

She first attended Kandilli Elementary School. Later, her parents hired private tutors and homeschooled her. She learned Arabic, Persian, German and French from her private tutors. Her mother and cousin Nakiye educated and influenced her about European thought and literature. Nakiye Hanım was one of the writers of the first Ottoman feminist periodical, the Hanımlara Mahsus Gazete (Daily Newspaper Special for Ladies). She published her feminist writing under the pen name "Zekiye," which means "clever woman."

Born to be an activist

We do not have much knowledge about Nezihe Muhiddin's life before the 1908 Revolution. She worked as a science teacher at the Girls' High School under the rule of the Committee of Union and Progress (CUP). She was also the secretary of the Ottoman Turkish Women's Protection Association. Around the same time, she became the principal of the CUP Girls' Technical School. She taught piano, foreign languages, knitting and other skills to the girls, as well. During World War I, Nezihe Muhiddin transformed the school into a knitting house for the army and worked with her students. She and her students also nursed wounded soldiers at First Treatment Hospital. She became the principal of Gaziosmanpaşa Boys' High School in 1929. She later retired from that position.

Nezihe Muhiddin had a very active professional life. She wrote special reports for the Education Ministry and managed many schools. She worked for foreign schools, too.

She married twice and took the surname of her second husband, Memduh Tepedelengil. However, she never used her husband's surname in her writing. She preferred "Nezihe Muhiddin," which was the combination of her maiden name and her father's name in accordance with traditional Ottoman naming.

Nezihe Muhiddin is well-known for her political activism. Yet, she wrote nearly 20 volumes of fiction and nonfiction. Her literary life also contributed to the women's rights movement in Turkey. She published her first novel, "Şebab-ı Tebah" (The Lost Youth), in 1911. She continued publishing her novels, short stories and political essays until 1944.

Critics have not given much credit to her style. Indeed, she was a political writer and always put her ideas at the front. She often said "the ideal of women's freedom is my ideal," which reflected her dedication.

After the 1930 election failure and the regime's closure of her association, she adopted a calmer lifestyle. She often visited and exchanged ideas with her sisters-in-arms Fatma Aliye, Yaşar Nezihe and Şükufe Nihal Başar, and formed a close circle of feminists.

She died on Feb. 10, 1958 at La Paix Hospital in Istanbul. Her life and work has become a frequently visited topic for gender studies at universities. Her collected works have also been published in a series of volumes in Istanbul.