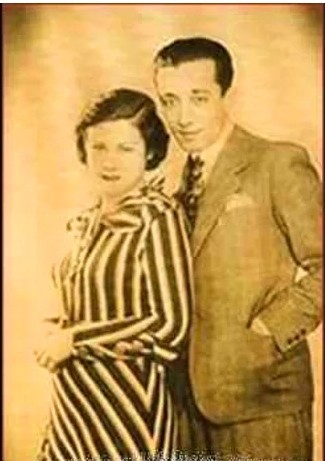 Having made her mark on history as the first Muslim actress on the Turkish stage, Afife Jale rose to fame quickly, but fell sharply due to drug abuse and faded away at the young age of 39

Bedia Muvahhit has long been identified as the first Turkish stage actress by theater historians. However, that is true only for the Republic's sake. Dating everything back to 1923 is an old but bad habit of Kemalist popular culture historians.

Indeed, Muvahhit became a theater actress overnight. When Atatürk asked why Muslim women did not show up on the theater stage, they prepared Muvahhit in hours and she acted in "Ceza Kanunu" ("Criminal Law") the next night. The supreme leader said there should be a Muslim stage actress and there was Bedia Muvahhit.

Beyond that contrived creation of Turkish stage actresses, the real story of the actresses in Turkey began years before the Turkish Republic. On Nov. 10, 1918, Darülbedayi (State Conservatory) admitted a few Turkish girls into its theater department, namely Behire, Memduha, Beyza, Refika and Afife, who would become the first ever heroines and victims of female stage acting in Turkey.

The group of Muslim girls was allowed to receive courses on theater, although they were reminded that they could perform in special women-only occasions.

Those were strange years for Turkey because of the never-ending wars. Eliza Binemeciyan, a renowned stage actress of Armenian origin in Ottoman Istanbul, left Turkey for Paris, which created an opportunity and peril for Afife.

She was asked to replace Eliza for the role of "Emel" (a young girl's name in Turkish) in the play "Yamalar" ("Patchwork") by Hüseyin Suat at the Apollon Theater in Kadıköy, Istanbul in 1919.

She actually acted a few days later, which caused the Istanbul police to overreact as it was against the law for a Muslim woman to act on stage in front of male strangers.

The police came to arrest Afife but, another actress, who is also said to be of Armenian origin, helped her out. She was overwhelmed by the applause of the audience. This was her life's choice; she was born to play on the stage. In her later years, she would say, "Theater made me and I exist if there is theater. If not, I do not exist."

Afife Jale was born in 1902 in Kadıköy, Istanbul, to a middle-class family. She was one of the grandchildren of physician Sait Pasha. Her father's name was Hidayet and her mother's name was Medhiye.

Afife was a student at the Girls' Fine Arts School when she was admitted to the Theater Department of the Conservatory along with a few other Muslim girls living in Istanbul.

In 1928, Afife Jale met Selahattin Pınar, a prominent composer of Turkish classical music, at a concert and they married soon after.

She left home because her father was against acting in theater. After a few months' training, she became a trainee actress. She played her first role with a pseudonym "Jale" in 1920. In spite of police raids, she continued acting before a male audience in Istanbul theaters. Her colleagues occasionally hid her from police interference.

Life of a butterfly

Afife's happy days on the stage of Darülbedayi, the official City Theater of Istanbul ended shortly. The Management of the Darülbedayi was obliged to cut her off. So, after being fired officially in 1921, Afife began acting at private company stages all around Turkey.

Being excluded from theatrical work upon an order from the Ministry of Interior, Afife felt severe pain and a pharmacist relaxed her with morphine injections, which she would become addicted to after some time.

Morphine is believed to have ruined Afife Jale's life in all aspects. Though the Republic was declared and women were allowed to act on stage, Afife was not healthy enough to act in a professional and continuous manner.

Finally, Afife left her career as an actress. In 1928, she met Selahattin Pınar, a prominent composer of Turkish classical music, at a concert where Pınar played behind the soloist. They married soon after, which is reflected in one of the most famous songs of the composer: "Bir bahar akşamı rastladım size" ("I ran into you on a spring evening").

After living six years with a brilliant but unhappy lady, who was a drug addict by now, Selahattin Pınar gave up and the two divorced, which was also reflected in Pınar's most famous song: "Nereden sevdim o zalim kadını?" ("How did I fell in love with such a dame sans merci?")

Afife was admitted to the Bakırköy Mental Hospital until she was transferred to the Balıklı Rum Hospital shortly before her death on July 24, 1941.

Afife was completely forgotten about until the State Theater in Ankara put on a challenging play written by Nezihe Araz in her memory in 1987. I was in the audience when "Afife Jale" was shown at the Ankara State Theater. The play consisted of 30 actors and actresses playing Afife, family, friends and officials who helped her in or prevented her from acting on stage. The play was very powerful. It was staged in Istanbul.

I believe that Afife Jale's legend owes much to the play by Nezihe Araz. Especially the stage name "Afife Jale," which she never used, but has been used to name the first Turkish heroine - and victim - on the stage.