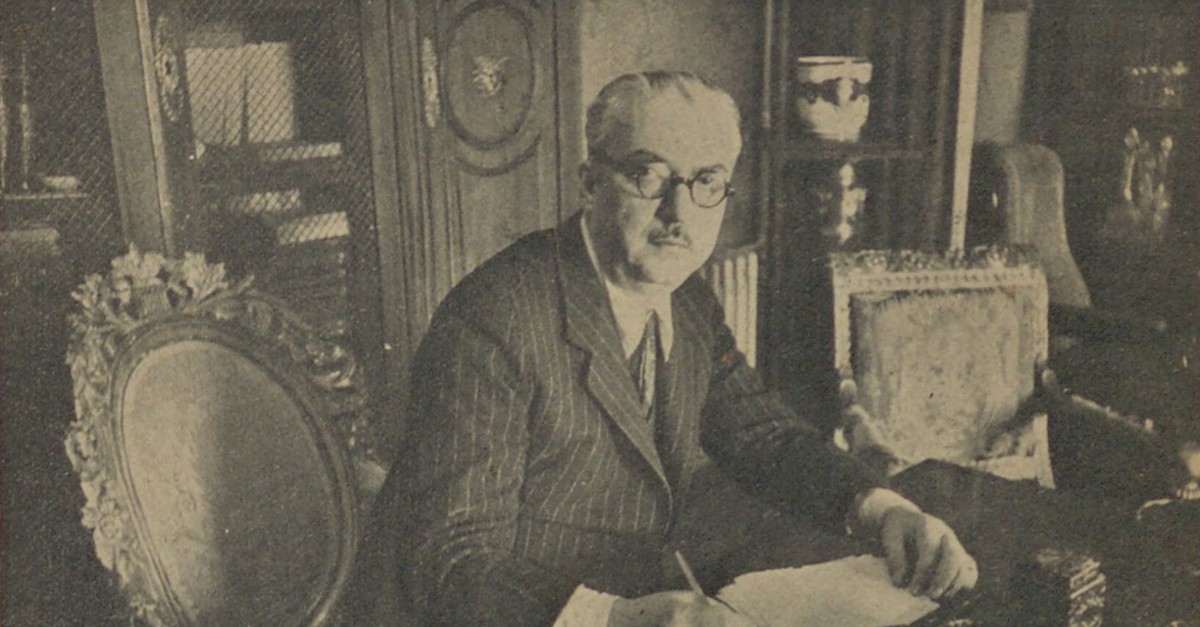 Mithat Cemal Kuntay reached posthumous fame through his biographies on Namu0131k Kemal, Ali Suavi, Mehmed II (the Conqueror) and Mehmet Akif.
by Hakan Arslanbenzer May 10, 2019 12:18 am

Mithat Cemal Kuntay was not only a convincing essayist in his own writing but also a talented literary critic, which is the root of his success in dealing with the biographies of prominent figures in the realm of literature

Turkish writers and intellectual readers occasionally complain about the lack of colorful biographies of prominent authors, which they think Stefan Zweig, the Austrian novelist and biographer, gave very delightful examples of. Zweig's popularity has never vanished in Turkey thanks to his biographical trilogy, namely "Three Masters" (Balzac, Dickens and Dostoyevsky), "The Struggle with the Daemon" (Hölderlin, Kleist and Nietzsche) and "Master Builders of the Spirit" (Casanova, Stendhal and Tolstoy). Though Zweig is famous for his short stories and novellas in Western countries, Turks have not paid much attention to his creative writings. He is, according to general belief, our teacher in biography writing.

In spite of the belief that we are not good in biography writing, there are thousands of biographies about Turkish authors. The problem is that most of these biographies tend to be documentary rather than artistic. If you decide to write a biography on a distinguished person, whether or not he or she is a creative writer, you must collect precise knowledge on his or her real life. This is obviously ironic since readers have complained about the lack of artistic biographies in Turkish, while the same people are inclined to ask the biographers put their own spin on the material.

I suppose the lack of artistic biographies as a literary genre in Turkish arises from our common belief that the lives of prominent persons belong directly to history, which should be written with precise documentation, not on mere suggestions of the writer. In his turn, Zweig is not a precise historian of the lives of prominent Western authors. What he has done is simply subjective, while ordinary Turkish biographers need to be accurate in handling the immanent verity of someone else's life.

I think the best examples of the latter are the Namık Kemal and Mehmet Akif biographies written by Mithat Cemal Kuntay, who was a novelist himself. Kuntay was not only a convincing essayist in his writing but also a talented critic of literature, which is the root of his success in dealing with the biographies of such great personas.

Mithat Cemal Kuntay was born in Istanbul in 1885. His father Selim Sırrı Bey was from Shkodra (now in Albania), while his mother Samiye Hanım was from Trikala (now in Greece). Kuntay's parents came from migrant families who were obliged to leave their homelands after the Ottoman-Russian War of 1877-1878. Selim Sırrı and Samiye married in poverty though their families were among the notables of Shkodra and Trikala, respectively. They could not provide a wealthy life to their children; however, the cultural capital they possessed would be vital for Mithat Cemal in his life. He recalls that his mother would read Namık Kemal's novel "Cezmi" to him; thus, passed patriotic feelings to him. He also adds that he fell for literature after "Cezmi."

Kuntay enrolled at Mekteb-i Osmani in Istanbul's Aksaray neighborhood before he transferred to Saint Joseph in Galata. However, after his father's sudden death, he had to leave private school and graduated from Vefa High School, a state school.

Although he was poor in high school, Kuntay met many prominent writers, including Mehmet Akif, who would be his best friend for more than three decades. Akif convinced him to develop his knowledge of languages. The two studied poetry and French every Wednesday night, which he lovingly tells in Mehmet Akif's biography. Kuntay enrolled at the School of Law in Istanbul Darülfünun (Istanbul University) and completed his Ph.D. in law in 1908. During his college years, he worked as a journalist and a clerk for a lawyer. After his Ph.D., he gave a rhetoric course at the School of Law under professor Hakkı Pasha's supervision. After his academic years, Kuntay worked as a chief clerk and a deputy director at the Justice Ministry. He also worked as a judge for some time before he was promoted as a notary public in 1923, a post he kept until his death.

However, Kuntay's main interests were always literature and politics. He was arrested and spent time in prison because of his political activities during his high school years. He was a Young Turk during the reign of Abdülhamid II, who he always saw as a tyrant. On the other hand, Kuntay was not a severe adversary since his love for literature exceeded politics most of the time. Besides, the 1908 revolution helped him in expressing his ideas in freedom without being detained.

Like most of his peers, Kuntay began his literary career by writing poems in high school. He published some joint poems with Mehmet Akif, his elder friend and literary comrade, in journals like Sırat-ı Mustakim (The Right Path) edited by Akif. Kuntay was among the 40 writers sent to the Çanakkale front by the government during the World War I campaign. He wrote many epic poems in support for the Ottoman army fighting against European invaders in many fronts.

However, the epic and heroic poems of Kuntay did not survive after the war because of the cliches surrounding his lines. On the other hand, his friend Akif's poetry gained utmost importance during and after the war. I think the main difference was in their attitude toward the happenings on the battlefield. To Mithat Cemal Kuntay, war was a pretext of heroic portrayal, which was an imitation of Ferdowsi's heroic poetry, while Akif was a political realist and wrote not only homage to the heroes of the battlefield but his critical thoughts and pathetic feelings about war and politics as well.

Kuntay's romanticism, on the other hand, brought considerable fame to him as a writer. Combined with his loyalty to the Ankara government and Mustafa Kemal Atatürk during and after the War of Independence, this romantic attitude provided him with a status among the new elite authors of the Republican era. Mustafa Kemal once read some of his lines concerning the heroism of the Turkish soldiers at the Grand National Assembly, which gave Kuntay a type of political immunity, while his friend Akif, among other dissidents, were under police surveillance. Kuntay's real significance as a creative writer came with his novel, "Three Istanbuls," which is a colorful portrayal of three political eras of Turkey, namely the Abdülhamid period, the Second Constitution period and the Armistice (times when Istanbul was under occupation by the Allied Forces) period. Some critics think that Kuntay's "Three Istanbuls" is a poor novel in style; however, its historical substance has helped it survive until now. Written in 1938, "Three Istanbuls" was adapted for TV and aired by the state-run TRT in 1983.

Kuntay's posthumous fame is due to his biographies on Namık Kemal, Ali Suavi, Mehmed II (the Conqueror) and Mehmet Akif, which I suppose is his masterpiece. Kuntay's biographies firstly rely on thorough documentary research about the lives and works of the person he writes on. Secondly, he collects enough data to make the persona speak for himself depending on memoirs and letters. Kuntay's third weapon is an aesthetic critique of the persona's authorship, which is indeed fascinating and sometimes ascends professional critics' evaluations on the same pieces.

Mithat Cemal Kuntay died on March 30, 1956. His body was buried next to his wife Naile Hanım at Karacaahmet Cemetery on the Asian side of Istanbul.