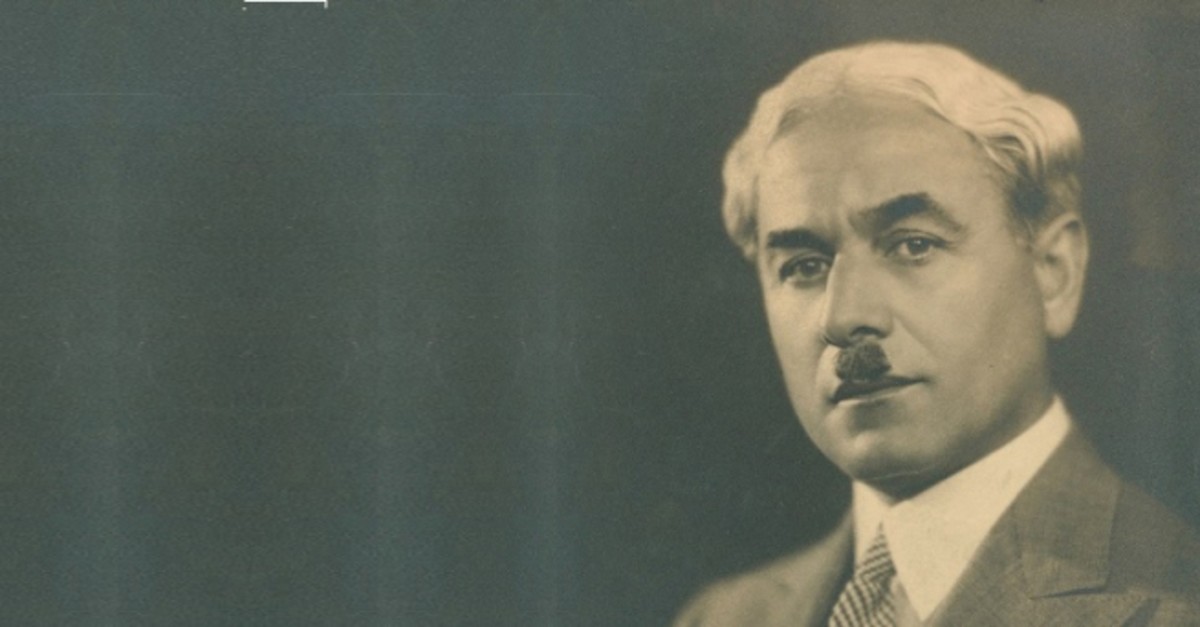 Hamdullah Suphi Tanru0131u00f6ver played a historical role in Turkish history by helping the national anthem be written.
by Hakan Arslanbenzer Jun 14, 2019 12:01 am

A poet by nature, a member of Parliament for decades, an activist in national institutions like the Turkish Hearts, Hamdullah Suphi Tanrıöver lives on the national memory as the aide behind the national anthem

Two bureaucrats of education, Satı Bey, the director of Darülmuallimin (the School for Teachers) of the late Ottoman period, who also played a critical role in the foundation of modern educational systems in Iraq and Syria, and Hasan Ali Yücel, the minister of education in the World War II period, are credited for their efforts in establishing a new understanding of education in Turkey. Satı Bey is seen as the founder of the principles of modern education in Turkey, while Yücel is generally referred to as the initiator of the so-called "humanist cultural policy." However, there is a third politician, who played a historical role during the War of Independence as the minister of education for the Ankara government, Hamdullah Suphi Tanrıöver. Tanrıöver, though he worked for less than 22 months as the education minister, helped with the "İstiklal Marşı" (March of Independence), the Turkish national anthem that was written by Mehmet Akif, the greatest poet of the late Ottoman and early Republican eras, accepted officially by the Grand National Assembly on Mar. 12, 1921.

Hamdullah Suphi Tanrıöver was born in 1885 in a luxurious mansion in the Horhor neighborhood of old Istanbul as the son of Abdüllatif Suphi Pasha, a high-ranking bureaucrat who worked as a minister for four different departments including foundations, finance, commerce and education. Abdüllatif Suphi Pasha was also the first Turkish numismatist. Tanrıöver's uncle Samipaşazade Sezai was one of the first realist novelists of Turkish literature. Besides, Tanrıöver's grandfather Abdurrahman Sami Pasha, father of Abdüllatif and Sezai, was a great vizier of the 19th century. He was the founding minister of public education and was incumbent from 1857 and 1861.

It's an interesting point that Ülfet Havva Hanım, Hamdullah Suphi's mother, was a Circassian slave before she married with Abdüllatif Suphi. It was common in the 19th-century that high ranking Ottoman bureaucrats coupled with slaves in marriage.

Another curiosity about Hamdullah Suphi Tanrıöver is that his surname "Tanrıöver" (meaning "Praising God" in Turkish) is the etymologically Turkish equal of "Hamdullah," which is of Arabic origin.

Sami Pasha mansion at the skirts of Çamlıca Hill was the address of literary meetings for many prominent Ottoman authors. Grandfather Sami Pasha was a rich vizier with three wives and 14 children; therefore he bought a mansion with 60 rooms. He liked the tastes of a rich life and culture, and hosted the intellectual figures of his time in his mansion.

Hamdullah Suphi was first schooled at Altunizade and Numune-i Terakki schools. After that, he graduated from the Galatasaray Sultani (High School) in 1904. Like many of his peers, Hamdullah began writing poetry during his high school years. One of his poems about Namık Kemal, the great poet of the Tanzimat period, was published in "Şura-yı Ümmet" (Assembly of People) periodical in Paris, which was a propaganda newspaper of the Young Turks including Hamdullah's uncle Sezai, in 1902. Hamdullah was in love with the epic poetry of Namık Kemal and imitated him much in his own poems.

Just as his father and grandfather, Tanrıöver also began to work as a public agent. He worked as a translator for the customs and monopolies department and also for the Istanbul municipality for a while before he chose to be a teacher. He taught official writing, civilization and French in Ayasofya Rüştiyesi (High School), the methodology of teaching and Ottoman language in Darülmuallimin (School for Teachers) and Turkish literature, the methodology of teaching and Turkish-Islamic aesthetics in Darülfünun (Istanbul University). Tanrıöver's personal venture begins with his affiliation with the National Literature movement. He took sides with the nationalist politics against the Westernist and Islamist versions of it, and participated in the activities of such nationalist institutions as Türk Derneği (Turkish Association), Türk Yurdu Cemiyeti (Turkish Homeland Society), Türk Ocağı (Turkish Hearts), a nongovernmental organization founded as a Turkish national committee, and Türk Bilgi Derneği (Turkish Knowledge Association). In 1913, Tanrıöver visited Petersburg as a member of the Ottoman commission that worked for keeping Edirne and Tracia as Ottoman soil after the Balkan Wars.

Tanrıöver gained popularity by his speeches at protests against the Greek invasion of İzmir in May 1919. He entered the Ottoman Parliament as a representative for Saruhan (Balıkesir) province. He passed secretly to Anatolia in order to join the national struggle after the invasion of Istanbul by the Alliance. He was a member of the Grand National Assembly. Soon after that, he was assigned as the minister of education. In 1921, he played his historical role in helping the Turkish national anthem be written and ratified by the Parliament.After the War of Independence, Tanrıöver kept his position as a member of Parliament for some consecutive terms. He was the Turkish ambassador to Bucharest during the 1930s. After 1950, he left the Republican People's Party (CHP) and entered Parliament twice from Democrat Party rows. He retired from politics after he lost elections as a candidate for parliament from the Party of Liberty rows in 1957. He lived out the rest of his life at the Suphi Pasha mansion in the Horhor neighborhood. He died on June 19, 1966.

Hamdullah Suphi Tanrıöver was the founder of the Ethnography Museum. He was also responsible for the revival of Türk Ocağı during the Republican era. He chaired the Türk Ocağı until 1932 and made it the greatest nongovernmental organization with 230 branches all around Turkey. A member of the "Fecr-i Ati" (Dawn of the Future) literary movement in his youth, Tanrıöver never left writing. His writings and speeches were collected in various volumes. He also published his memoirs concerning the War of Independence.