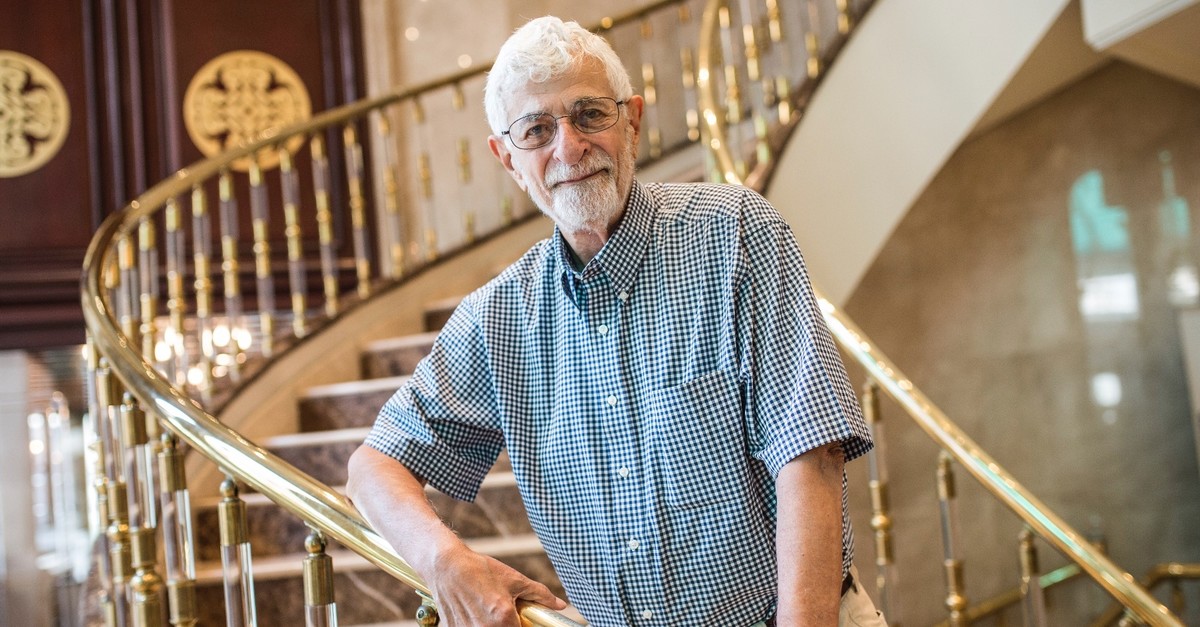 After enduring turbulent years in Cyprus, Vamık Volkan became a psychoanalyst specializing in armed conflicts and the grief and mourning they leave behind. He contributed greatly to the field by visiting many countries suffering from armed conflicts, including Turkey, Colombia, Israel, Egypt and Russia

Armed conflicts have always taken place on Earth. Most, if not all, nations have a history of violence. The first genre to deal with the armed conflicts was epic poetry. Humanity created thousands of narratives on the wrath and vengeance of warriors. Yet, the other side of the violence, the grief left behind, was not neglected by the epic narrative. Perhaps the most touching lines of Homer's "Iliad" tells about Priam, the legendary king of Troy, weeping on his son Hector's corpse together with Achilles, the killer. Killing always comes with grief.

Studies on armed conflict among social and political groups have developed since the emergence of social and behavioral sciences. Though history has always been concerned with wars and battles, historians generally do not tend to deal with the psychological effect of such armed conflicts. We should have waited for a combination of political science and psychology for an inquiry about the emotions left behind such armed conflicts. Political psychology has studied many aspects of political behavior of groups including political interactions among nations and ethnic groups, the psychology of crowds, interactions between the ruling elites and the ruled masses, psychoanalysis of political decision-making, and finally psychoanalysis of grief yielded by armed conflicts, which Vamık Volkan, a Turkish Cypriot, originally contributed to a lot.

Vamık D. Volkan was born Vamık Cemal on Dec. 13, 1932 in Cyprus, then a British colony, to a Turkish Cypriot family. Volkan's ancestors on his father's side were from Nevşehir originally. His grandfather Salih was a farmer in Serdarlı, a village of the sub-province Famagusta, while his father, Ahmet Cemal, was a school teacher. On the other hand, Volkan's maternal ancestors, who came from Bursa to Cyprus centuries ago, were of the ulema class of the Ottoman State. Vamık Volkan was named after his mother's grandfather Ömer Vamık, who was a qadi (an Islamic judge) in Nicosia.

Ömer Vamık left Nicosia for Lefka as the Ottomans granted Cyprus to British colonialists as a part of the treaty signed after the Ottoman-Russian War of 1877-1878. Ömer Vamık remarried in Lefka, which created a bipartite family, because he also left his first wife in Nicosia. Vamık Volkan was born as a member of the Lefka part of the family.

Vamık Volkan has famous relatives including Nil Burak, the pop singer, who is his cousin from the Lefka side, and Niyazi Berkes, the great sociologist, who was a remote relative of Volkan from the Nicosia part of his family.

In the early '60s, when Vamık Volkan was in Turkey for educational reasons, the National Organization of Cypriot Fighters (EOKA), the Greek Cypriot terrorist organization, forced the Turks of Lefka to leave the town, and Volkan's family moved

to their relatives' home in Nicosia. "Sixteen families had to live altogether. Hard times," told Vamık Volkan in a press interview.

Volkan moved to Turkey in 1950 to study medicine at Ankara University, where he graduated in 1956 as a medical doctor. He worked as a doctor for six months without a salary because he was a British citizen and foreign doctors were not allowed on the payroll in Turkey. "It was a shame that I made my living by my father's money though I was working as an M.D."

Volkan decided to move to the United States like many of his colleagues. He had only $15 in his pocket when he stepped onto U.S. soil in February 1957. He married a woman named Esther, with whom he had two children, namely Levent Kevin and Suzan. Levent Kevin is now a professor of clinical psychology on the Channel Islands.

Volkan studied psychoanalysis in the U.S. "Of course, first you should lie on the couch before your professor for your own psychoanalysis," he said in an interview. He also said that he was shocked by the killing of a close friend by EOKA terrorists while on vacation in Cyprus. "This affected me too much," he remembered, "so, I suppressed my grief, and this forced me to forget how to speak Turkish."

Those were hard times for the Turkish Cypriot community. "You could not know if your family were killed or not because of the EOKA terrorism. Yet, I unconsciously denied all of it. I was studying too much. Sometimes I read 30 volumes of psychoanalysis books together. I was too busy to mourn the death of my loved ones."

In 1968, he had the opportunity to visit his family in Cyprus thanks to his U.S. green card, which was allowed by the Greek Cypriot administration despite the blockade against the Turks. "Everybody was in fear. Sixteen families were living together, and everybody was silent. This was horrible."

Bird in a cage

The aforementioned experiences drove Volkan to psychoanalyze his home community. In 1979, he wrote "Cyprus, War and Adaptation," where he uses a metaphor for the psychology of Turkish Cypriots under the Greek blockade: Bird in a cage. Turkish Cypriots were fond of birds in cages in those days. According to Volkan, this was because of their own situation.

After his first study on Cyprus, Volkan became a psychoanalyst of armed conflicts and the grief and mourning left behind. He took various managing positions at hospitals, universities and research institutes in the U.S. The Center for the Study of Mind and Human Interaction (CSMHI), which Volkan founded and directed from 1987 to 2002, at the University of Virginia, applied a growing theoretical and field-proven base of knowledge to issues such as ethnic tension, racism, national identity, terrorism, societal trauma, leader-follower relationships, and other aspects of national and international conflict. Because no single discipline can fully illuminate such deep-seated and complex issues, CSMHI's faculty and board included experts in psychoanalysis, psychiatry, diplomacy, history, political science and environmental policy.

Volkan was a part of political negotiations and peace-making processes rendered by U.S. representatives, either official or voluntary. He worked with Jimmy Carter, the former U.S. president, at the International Negotiation Network. Thanks to his affiliations, Volkan visited many countries suffering from armed conflicts, including Turkey, Colombia, Israel, Egypt and Russia. Sometimes, he was criticized for his work as he has always worked under American supervision. He replied to this type of criticism by saying: "I worked with the government, rights. But I have never been an agent for them, I worked with them as an academic person."

Volkan has written more than 500 scientific papers and authored more than 40 books. He is the recipient of numerous awards. He was nominated for the Nobel Peace Prize four times, between 2005 and 2008, supported by letters from 27 countries.