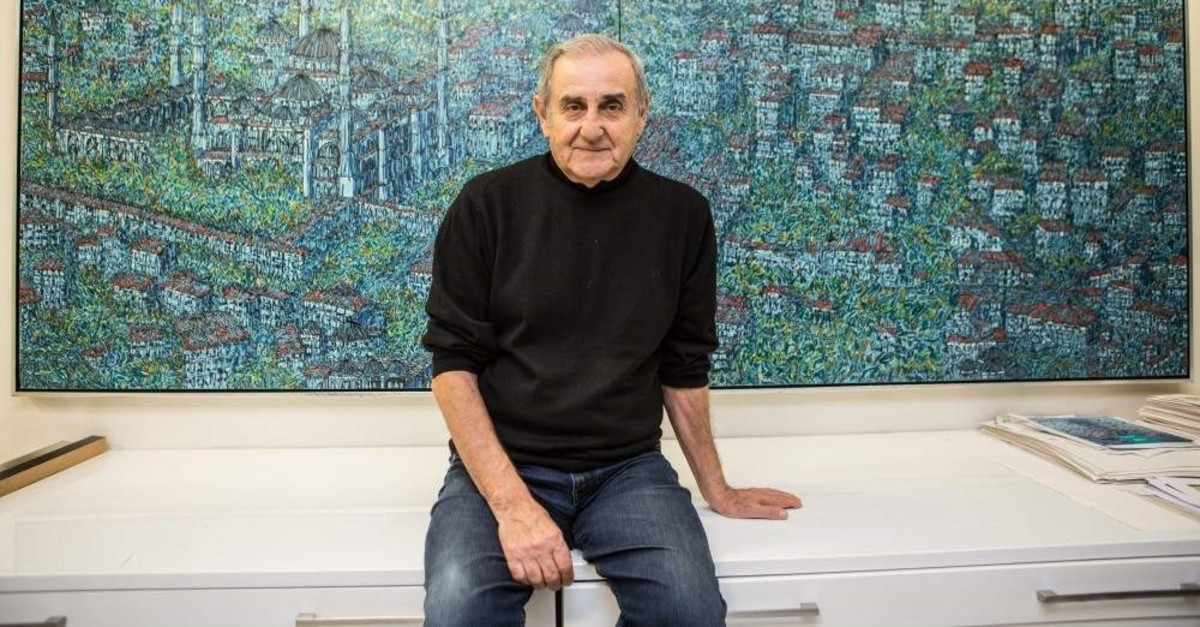 One of the artists to be recognized at the Presidential Culture and Arts Grand Awards this year, Devrim Erbil creates abstract landscape paintings of Anatolia and Istanbul using various techniques

The Turkish Presidency has been holding the Presidential Culture and Arts Grand Awards since 1995 to recognize the distinguished scientists, writers and artists of Turkey, or cultural institutions such as the Sakıp Sabancı Museum and Zeugma Ancient City and Museum. The awards are granted upon the guidance of the Cultural and Arts Policies Council and at the president’s suggestion. In November or December each year, the council meets under the chairmanship of the president and designates the Culture and Arts Grand Awards. Finally, the awards are submitted to the winners by the president himself during a special ceremony held in the last month of the year.

Since 1995, many visual artists have been awarded by the Presidency. Last year, İzzet Keribar, a prominent photography artist, was among the award winners. While Turkish cinema has been recognized through awards given to producers, directors or actors, the most-awarded genres are literature, music and painting. Poets and fiction writers are always in the spotlight, which attests to the very special place of literature in Turkey. Music follows literature with awards to composers and performers with traditional or modern understandings.

The third most-awarded genre by the Turkish Presidency has been modern, or even post-modern, painting in addition to the special interest of the Presidency of Recep Tayyip Erdoğan toward traditional or Islamic visual arts. Painters with a national and international reputation such as Burhan Doğançay, Ergin İnan and Ferruh Başağa have been granted the Grand Award.

Yet, no painter had won the award for almost a decade until 2019. Painting – among other genres including architecture, music, cinema and traditional arts – is also going to be represented at the award ceremony.

Devrim Erbil, an experienced painter, explained his art view in the following words: “I oppose the understanding that thinks we should cultivate the Western artistic movements on Turkish soil. I believe we should approach the West with a conscious selectivity, look for the artistic formation beyond formalistic clichés, view the contemporary problems through the lens of our own art, and confront the West in this way.”

Erbil was born on Sept. 16, 1937, in the Salihli district of Manisa province in the Aegean region. He is the son of Nadide and Reşat Erbil. In 1940, he and his family moved to Balıkesir province, where he enrolled at the elementary and high schools.

Some of his teachers helped him discover his love for painting during his early school years. He opened his first exhibition with two of his friends at the Turkish-American Association in his senior year of high school.

In 1954, Erbil enrolled in the Painting Department of the State Fine Arts Academy in Istanbul, from which he graduated in 1959. He worked as an apprentice for Bedri Rahmi Eyüboğlu, a famous writer and painter, at the studio of Halil Dikmen after graduation. He became an assistant at the Fine Arts Academy in 1962. He worked as an assistant at the workshops of Bedri Rahmi Eyüboğlu, Cemal Tollu and Cevat Dereli for years. He was among the first Turkish abstract painters and was inclined to establish a connection with the Turkish traditional visual arts through his abstract landscapes.

After joining such collective exhibitions as the “Seven Abstract Painters” (1959) in Ankara, Istanbul and İzmir and the “Blue Group” (1963) in Istanbul, Erbil won a scholarship from the Spanish government and visited Spain, Italy and France to study modern painting. After returning from Europe, he joined the “Five Young Painters” (1966) collective exhibition in Ankara and Istanbul. Additionally, Erbil has been one of the continuous participants of such collectives as the State Painting and Sculptor (since 1961) and the Turkish Modern Painters Association (since 1962).

Indeed, Erbil drew his own way in modern abstract painting during the early 1960s with his special bird’s-eye view landscapes with composition that relied on sketches, establishing a connection with traditional Turkish painting, the miniature. His paintings are not mere imitations or renewals of traditional miniatures, but modern original drawings in color with a huge amount of realistic details. Erbil’s city landscape paintings and drawings connect with the traditional miniatures via the bird’s-eye view and the disregard of the linear perspective. As an abstract painter, Erbil does not copy the dimensions of nature as they are but renovates those dimensions with a feeling of rhythm excerpted from nature itself. I believe the latter adds an impressionist spirit to his paintings, too.

Erbil was mentioned in a four-volume treatise on modern abstract painting all around the world, namely “L’art Abstrait” (“The Abstract Art”), authored by Michel Seuphor and Michel Ragon and published in 1974. One of his abstract paintings was included in a section of the same study designated for Turkish artists.

Erbil has been awarded numerous times. He received his first award in Tehran from the Persian Kingdom in 1966, followed by another award granted by Egypt for the Alexandria Biennial in 1972 for his work named “Variations for the Life in an Anatolian Town.”

Erbil believes that an artist should start with the tradition of his homeland. So, beginning with the 1970s, he made abstractions of urban and natural landscapes of Anatolian towns and Istanbul. He painted successive series on “An Anatolian Town” (1976), “Anatolian Impressions” (1977), “Istanbul” (1977) and “Birds” (1977), all of which contributed to his reputation. He has made hundreds of variations of the Istanbul landscape under various techniques and materials. It would be no exaggeration to call him the abstract painter of Istanbul views.

Erbil became a full professor at the Fine Arts Academy. He chaired the Turkish Modern Painters Association in 1969 and the Visual Artists Association in 1975. He also worked as the director of the Istanbul Painting and Sculptor Museum from 1979 until 1982. Erbil opened more than 60 exhibitions in Turkey and abroad. He received the Atatürk Award designated for the 50th year of the Turkish Republic in 1973 and was given the title of “State Artist” by the Ministry of Culture in 1991.

In 2004, Balıkesir Municipality opened the Devrim Erbil Museum, the first museum established for an artist by a local administration. Erbil retired in the same year and began to teach at Doğuş University, a private college in Istanbul.

As one of the winners of the 2019 Presidential Culture and Arts Grand Awards, Erbil will receive his award from President Erdoğan in person at a special ceremony to be held soon.