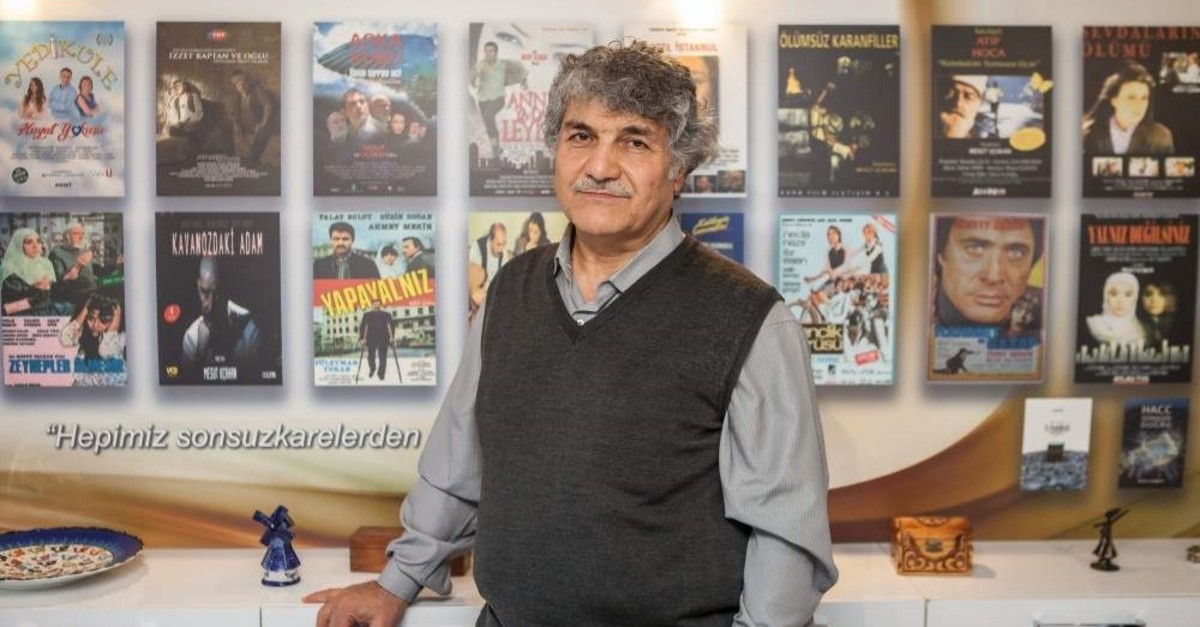 Making lifelong efforts to showcase the national and local identity of Turkish cinema with impressive filmography, Mesut Uçakan is among the 2019 Presidential Culture and Arts Grand Awards recipients

Attempts for an Islamic cinema were started by the National Turkish Students Union (MTTB) in the early 1970s. MTTB’s Cinema Club was the cradle of the National Cinema approach, which is sometimes referred to as “white cinema” or “Islamic/Islamist cinema.” Yücel Çakmaklı, a mature cinema director who made films with social criticism based on religious themes, acted as the mentor for the young cinema lovers such as Salih Diriklik and Mesut Uçakan, who became prominent filmmakers at the MTTB.

The MTTB Cinema Club aimed to help the young students of middle and high schools in Anatolia gain access to the cinema. They showed carefully chosen movies, including dramas and documentaries, on certain days of the week, in addition to the seminars and courses held for the education of the young members of the union. Perhaps the most famous cinema event of the MTTB Cinema Club was the “National Cinema Panel,” which was held in 1973 with the participation of the greatest filmmakers of Turkey including Metin Erksan, Halit Refiğ, Duygu Sağıroğlu and Yücel Çakmaklı. The panel session lasted four and a half hours and the discussions were later published in a book by the MTTB.

Indeed, there was a gap between the film directors speaking at the MTTB panel when it came to their understanding of “national cinema.” Çakmaklı sought to cover all of the traditional cultures including religious and moral features, while Erksan and Refiğ understood the “national cinema” as being secular. However, MTTB raised its own filmmakers throughout the years who would create a short-lasting, but outstanding Islamic cinema style. Salih Diriklik, the chairman of the MTTB Cinema Club, Mesut Uçakan and İsmail Güneş in particular made ideological films with a high aesthetic level in the 1980s. I suppose Uçakan has been the pivotal person for the Islamic cinema in Turkey.

Uçakan was born in 1953 in the Cankurtaran village of Kırıkkale province, a conservative central Anatolia province, to very religious parents. His father was a driver at the Regional Firefighting Department of Kırıkkale. Uçakan remembers his father as a very kind person who “never upset his family.”

Uçakan's father made him enroll in secondary education of the imam-hatip school in Kırıkkale, which was opened one year after young Uçakan graduated from primary school. He spent a full year reciting the Quran at the local Quran course in his town.

Uçakan remembers that he was not pleased that his father made him wait for the imam-hatip school instead of enrolling at the ordinary secondary school in his town. Yet, he liked the environment of the imam-hatip school since he loved to read, and his teachers encouraged his reading. Moreover, he experienced an ideological awakening at this school and became an Islamist.

After secondary school, Uçakan graduated from Çorum imam-hatip school in 1971. He wished to enroll in the cinema department of a university; however, imam-hatip graduates were not allowed to attend the universities. So, he enrolled in a special examination for the courses not covered in imam-hatip, and thus graduated from an ordinary high school in Adapazarı to enroll at the Cinema-TV department of the Journalism and Public Relations College of the Istanbul Economical and Commercial Sciences Academy (later Marmara University) in 1972.

As a religious college student, Uçakan affiliated with the MTTB and was a part of its cinema club. He also wrote film critiques for various newspapers. Additionally, he worked at film production studios as a director’s assistant and scriptwriter. He became the chairman of the MTTB Cinema Club in 1976 when he published a cinema journal with friends, who called themselves the “Akın Grup” (Group Rush), a young Muslim filmmakers’ group led by Diriklik.

The Group Rush made their debut film in 1975 named “Gençlik Köprüsü” ("Bridge of Youth"), directed by Diriklik. However, the group later dissolved and Uçakan began to work on his own. He directed his first film in 1978, “Lanet” ("Curse"), which told the story of a young girl committing suicide and her family’s suffering after the incident. “Lanet” has not been credited much as an Uçakan film since the script and the director’s approach is ordinary to the Yeşilçam style. Yet, the debut film is also the first example of Uçakan’s special interest in adverse events such as suicide, madness and death.

Uçakan’s art can be divided into three periods. The first had existentialist movies with Islamic themes, which he made in the 1980s. The second was marked by political films in line with the Islamist movement, and the third included romantic films with universal themes.

One of Uçakan's greatest films came in 1988 named “Reis Bey” ("The Judge"). The film, based on a story by Necip Fazıl, discusses crime, judgment and punishment. It can be seen as a Turkish and Islamic adaptation of Dostoyevsky's "Crime and Punishment." Many people consider "Reis Bey" to be his masterpiece.

Uçakan moved to political dramas in the first half of the 1990s. He made two films on the headscarf prohibition – “Yalnız Değilsiniz” (“You’re not Alone," 1990) and “Sonsuza Yürümek” ("Walking to Eternity," 1991) – which were widely discussed in intellectual circles and brought great fame to the director. Uçakan also directed “İskilipli Atıf Hoca: Kelebekler Sonsuza Uçar” ("İskipli Atıf Hoca: Butterflies Fly to Eternity," 1993), a film about an executed Islamic scholar named İskilipli Atıf Hoca that heavily criticized the Kemalist regime. Later he made another film that criticized the harsh political conditions in Turkey and the Islamic World named “Ölümsüz Karanfiller” ("Eternal Cloves," 1995).

Uçakan kept silent for 10 years before making two films: “Anne ve Leyla” ("Mother and Leyla," 2005) and “Anka Kuşu” ("Phoenix," 2006), which can be seen as the director's attempt to overcome ideological barriers. “Anka Kuşu” has some autobiographical sketches as the main character is a filmmaker who is sentimentally divided between his rural-religious past and urban-secular present.

Uçakan lived another silent period from 2006 until he made a 31-episode series for TRT in 2016-2017, “Sevda Kuşun Kanadı” ("Love is on Bird’s Wings"). The series tells about the political situation of the nationalist/Islamist youth movement in the 1970s.

Uçakan wrote about cinema in "Türk Sinemasında İdeoloji" ("Ideology in the Turkish Cinema"), and his interviews have been collected by Necip Tosun in a separate volume.

Uçakan is among the winners of the 2019 Presidential Culture and Arts Grand Awards.