Coşkun Aral: Correspondent reporting the impossible with a personal touch 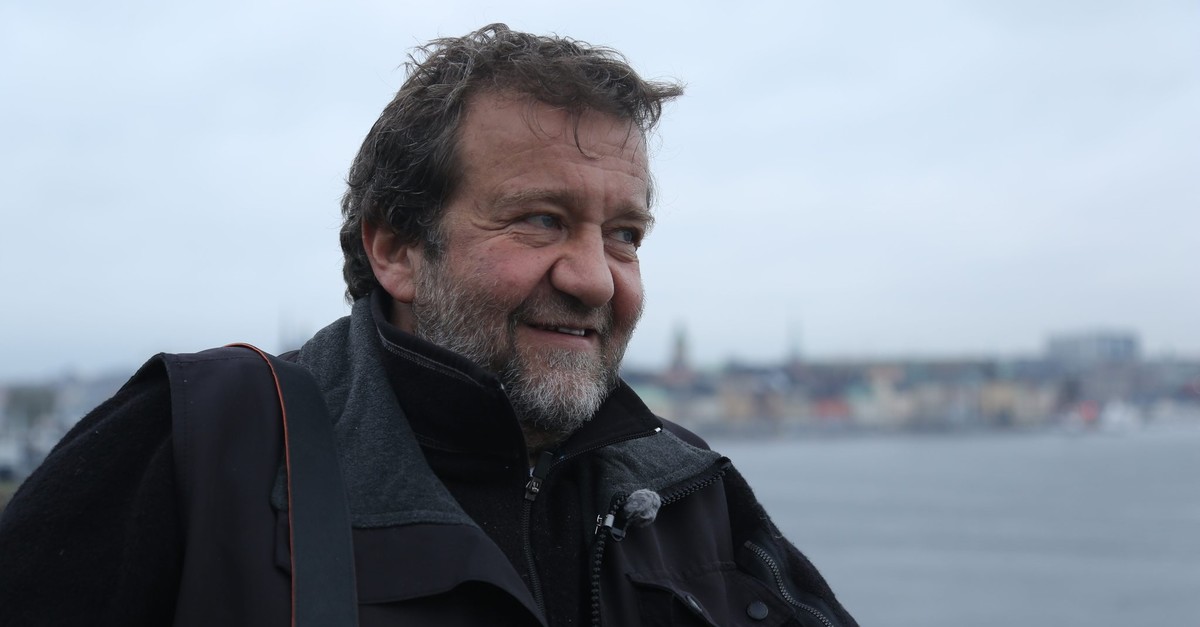 This file photo from 2012 shows Cou015fkun Aral in Sweden, where he was interviewed for a documentary series. (Sabah Photo)
by Hakan Arslanbenzer Feb 14, 2020 6:57 pm

Coşkun Aral played an instrumental role in the history of Turkish journalism as one of the country's first war correspondents; however, what really set him apart was his authentic reporting from conflict zones

Historians and travelers have always relished penning descriptive accounts of the armed conflict and the savagery of humankind; however, throughout most of our history as a species, reports and interpretations of wars and battles were never really transmitted by eyewitnesses. It was perhaps Willem Van de Velde, a Dutch painter who lived in the 17th century, who was the first person to portray a real battle as he witnessed with his own eyes, having hired a small boat to observe a naval clash between the Dutch and the English in 1653. He made a quick succession of live sketches, which he later developed into a detailed and complete drawing. After that, Van de Velde sent the drawing accompanied by a written report to the Dutch state.

From the time of the Napoleonic wars, battles began to be reported on by professional eyewitnesses whose job it was to convey details of the clashes to curious readers across Europe. The increasingly literate public showed great enthusiasm in reading such accounts, to the degree that it eventually encouraged newspapers to dispatch special correspondents to combat zones. Indeed, the first generation of war correspondents used a far more literary tongue by the standards of today's professional journalists.

The advance of modern technology later contributed much to how the media operates, including the job of war reporting. The invention of the telegraph made it possible for periodicals to update their audience with the latest developments, which has since become a silent rule for serious media outlets the world over. The measure of a paper – or journalist's – ability to give the latest, most accurate and humane war reports became seen as a testament to the level of quality of their journalism.

During the Crimean War, Ottoman newspapers informed their readers about the latest situation in the war not directly, but by assigning correspondents to collect reports from various indirect sources, including European embassies in Istanbul and the Ottoman army headquarters. This was the case for much of Ottoman and early Republican history after. In fact, there were no real war correspondents who delivered news directly as eyewitnesses in Turkey until recent decades. I think there were two reasons for such negligence: First, the Turkish army tended to not allow civilians to enter its combat zones, mostly for safety reasons. Second, the Turkish media didn't have the kind of material sources and capabilities needed to do this until recently. Anadolu Agency (AA) has remained the one and only source of any severe matters, including war reporting.

In fact, the war correspondent as a domestic figure in Turkey only emerged with the Cyprus Peace Operation launched in 1974. Ergin Konuksever, a young journalist from Istanbul, joined one of the armored units of the Turkish Armed Forces and witnessed the combat, coming under fire by the EOKA (Greek Cypriot gangs) – despite insisting he was only a journalist. Since Konuksever and his various peers' work in reporting on the situation in Cyprus, many Turkish journalists have witnessed and reported from territories devastated by armed conflicts.

However, I suppose the first Turkish journalist who added a personal touch to war reporting was Coşkun Aral, who worked as a photo-journalist and reporter in many combat zones, including Lebanon, Northern Ireland, the Philippines, Iraq, Bosnia-Herzegovina and more. Some of his snapshots have achieved classic status in the history of Turkish war journalism and photography. He managed to take some very brave photographs, including ones showing guerillas arbitrarily firing AK-47 machine guns and traumatized and angry people carrying their deceased or crying on the injured or dead bodies of relatives and friends. He shot videos on the streets of Sarajevo, where he was among the many civilian targets Serbian snipers took shots at hidden on the hills surrounding the city. It's obvious that Aral inspired many young people to become journalists and step onto the combat zone with a camera strapped to their necks.

Coşkun Aral was born on May 1, 1956, in the province of Siirt in southeastern Turkey. His family, originally Arabic, were notable members of the local community. He worked as an apprentice for a local newspaper until his parents sent him to Istanbul to stay with his aunt to be given extra care for his rachitis and pneumonia. He graduated from Mecidiyeköy High School and had aspirations of becoming a doctor; however, he also thought that he could play a second role as a photojournalist. Thus, he began to work for newspapers in the city while enrolled in French at Istanbul University.

He sold the photographs taken at Taksim Square on the notorious May Day of 1977 to Sipa Press, which spread his snapshots all over the world. Many prominent media outlets, including Time and Newsweek used Aral's Taksim photographs in their reports. This early connection with the international press soon helped him get work abroad. He took his first international assignment from the Sipa Press in 1980, observing the situation in Gdansk, the heartland of the "Solidarity" (a Polish trade union) revolt.

Aral became an independent war correspondent in the early 1980s, visiting conflict zones in various regions, including Northern Ireland, Iran and Iraq, Lebanon and Afghanistan, where he took numerous photographs and made documentary reels. Once, he was even able to conduct an interview with hijackers onboard a hijacked airplane.

Aral spread photos of Turkey's 1980 military coup across the world press. Beginning in 1986, he worked with Mehmet Ali Birand as a TV war correspondent for Birand's "32. Gün" ("32nd Day") monthly news show, aired at the TRT (Turkish Radio and Television). He also made his own program, "Haberci" ("Reporter"), which included video footage taken from various parts of the world, on ATV. Not all of his reports were about armed conflicts. He has also visited indigenous people of various areas in the world. Aral's motto is "to show what cannot be shown," which explains his choice of angles on situations, whether regarding war or peace.

Coşkun Aral has made numerous solo exhibitions of his war and travel photographs in many cities, including Paris, London, New York and Istanbul. He received various awards for his brave contributions to connecting media audiences with indigenous peoples and those suffering in the armed conflicts across the globe. He has also published a number of volumes of prominent works.

Aral later established the İz TV (Track TV), a documentary channel, and in 2002 married Müge Aral, with whom he has a daughter named Deniz. Aral continues to make weekly reports on current or historical matters on his personal YouTube channel "Coşkun Aral Anlatıyor" ("Coşkun Aral Narrates") by combining old footage with newer reels.