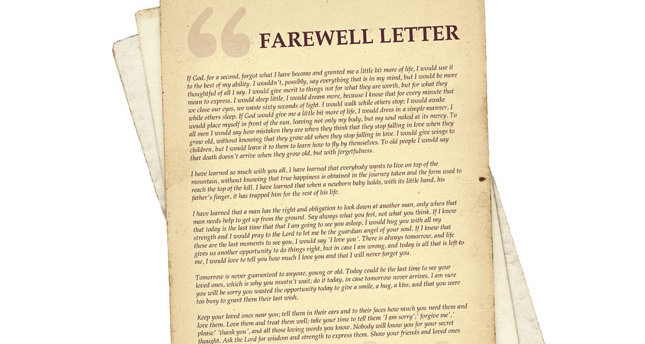 On March 6, 1927, Gabriel Garcia Marquez (Latin American nickname "Gabo") was born in Colombia and left this world on April 7, 2014. He was a novelist, short-story writer and a screenwriter.

When he died, what he left behind were his world-renowned books and his extraordinary legacy. I won't list all of his written works here, but my favorite was the book titled "Chronicle of a Death Foretold." It told the story of Santiago Nasar and how everyone knew he would be murdered yet not a soul could lift a finger against it. If I look at the book from a sentimental and pessimistic point of view, I find myself comparing the story of Nasar to the traditional media. That being said, I think my opinions on this matter will be the subject of another article. After all, today I plan to talk about the farewell letter allegedly written by Marquez.

Marquez had another aspect that is not known or talked about by the general population. He may be well known for his books, but before he was a wellknown writer he was first known as a journalist. While he was just a student in law school back in 1948, he started to work at the El Universal newspaper.

In the three-year period between 1950 and 1953, his articles were published in a local newspaper called El Heraldo.
From there he went to work at El Espectador.

In 1958, an offer came from El Momento and he went to Venezuela to work there as an editor. He shined thanks to a brave article he wrote about the Colombian Navy, and that led to his deployment as a reporter in Europe.

What he wrote about the Navy undoubtedly disturbed officials, and this redeployment was nothing but an exile dressed and sugar coated as a promotion.

He was a master of observing archetypal details of daily life and its reality.

Another thing to mention here is that Marquez was a wonderful example of a column writer with a specific writing manner. Unfortunately, today these types of columnists are nearly extinct and well sought after.

The name Marquez can be seen quite frequently in newspapers, not because of his articles, rather because of the news that depict his life. Such an example can be clearly examined in the recent case of a fake farewell letter that consists of many journalistic lessons.

After the passing of Marquez, many newspapers and social media Internet sites crawled with quotes from the books he wrote. We can easily say nearly all of the newspapers printed articles to re-introduce him to their readers.

Some of these articles were nothing but a short introductory note about his life, while others decided to advise their readers how to understand Marquez himself. As the ombudsman of Daily Sabah, I believe the best method of understanding Gabriel Garcia Marquez lies within his books.

Of course, dailysabah.com didn't forget about Marquez. A news article titled "Nobel Prize Winner Marquez Passed Away at 87" (April 17, 2014) based on a report by AP released from Mexico City was published online.

The last part of the article had the title, "A farewell letter written in 2009 by Gabriel Garcia Marquez."

I would sleep less and dream more. I understand that for each minute that we close our eyes, we lose 60 seconds of light. I would walk when others stopped, I would wake up when others slept, I would listen when others spoke, and how I would enjoy a chocolate ice cream!
If God gave me a piece of life, I would dress simply, I would lie in the sun, 'showing' not only my body but also my soul. My God, if I had a heart, I would write my hate on the ice, and I would wait for the sun to rise.

My God, if I had a piece of life... I won't let a single day pass without telling people how much I love them. I would convince every single woman and man that they are my favorites, and I would live in love with love.

I have learned that a man has only the right to look down on another when he has to help him to stand up.

There are so many things that I have learned from you, but ultimately will not serve much, because when they put me inside that suitcase, unfortunately I will be dying.

Always say what you feel, and do what you think."

Who gets the credit?

First, let's correct two issues here. Contrary to what dailysabah.com claims, this letter was not written in 2009.

The beginning of the above text was first published in the Peru-based La Republica newspaper back on May 29, 2000. According to the newspaper, during his cancer treatment in 1999 Marquez wrote a poem called "The Puppet" and sent it to his closest friends alone. The next day the Mexican newspaper La Cronica printed the poem on the front page and ran a headline saying "Gabriel Garcia Marquez sings a song to life."

Soon after, the poem was on the web and became world famous. Many translations emerged and were read on radio programs. It became so famous that even the Indian filmmaker Mrinal Sen told the Hindustan Times how much the poem moved him.

But neither the poem nor the letter belonged to Marquez. It was written by none other than Johnny Welch, a Mexican ventriloquist and puppeteer. In a play by Welch, a puppet made of rags, named "Mofles," reads this narrative.

Welch told Mexico's InfoRed radio station that he was nevertheless "feeling the disappointment of someone who has written something and is not getting credit."

On the other hand, it was claimed that Marquez said that what it pains him more than death is dying because of the shame that people thought such a cheesy text was his.

This playful lip service between these two writers lies outside the scope of this article. What should concern us is how such an obvious mistake could find its way into newspapers despite all these years and numerous corrections.

Our journalist colleagues had the means to find out that the letter did not indeed belong to Marquez with a little research. Shunning doing so is simply disrespecting the old journalist as well as the reader. Let us not forget, even though it looked convenient and was liked by many readers doesn't mean that the said article or the text is correct. dailysabah.com should apologize to Johnny Welch and its readers.
Recent events featuring the drama surrounding the fake farewell letter of Gabriel Garcia Marquez showed us no matter how much coverage something gets it always pays off to double check the facts. No matter how convenient it looks or how much readers like it doesn't mean that a given article or the text is authentic.