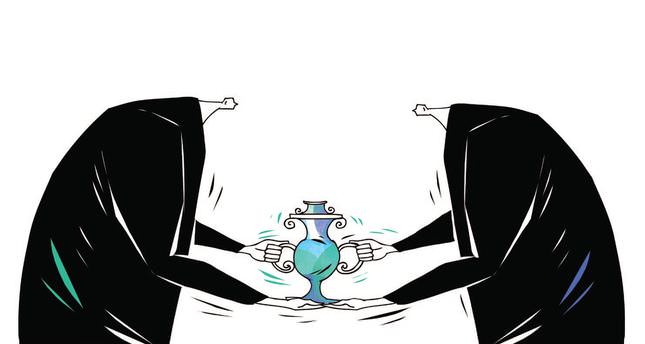 Journalists need to refrain from using an accusatory tone when dealing with issues concerning international struggles of history and culture. However, that does not mean that they cannot or should not raise public awareness on the subject

Last week we received a letter from the Kuntsthistorisches Museum in Vienna signed by Dr. Sabine Haag and Dr. Georg Plattner. It read: "In the June 13, 2014 Daily Sabah newspaper there was an article titled 'Sign petition to get the gypsy girl back' about a mosaic located in Zeugma. On the right side of the article there was a little box listing artifacts [discovered] in Turkey [which are on] display in Europe and the U.S. This box had the title 'Stolen and displayed overseas.' First on the list was the Vienna Ephesos Museum and a 50 meter-long marble fresco on display there.

This is probably the Parthian Monument. This surely must be a mistake because this fresco and many other Ephesus Ancient City artifacts were not stolen. They were given by Padishah Abdulhamid II to Emperor Franz Joseph I hundreds of years ago and thus came to Vienna. Padishah released an edict saying that Austrian archaeologists can take some of their findings in the first years of excavations (1895-1906). In exchange there were many gifts presented to Padishah from Vienna as well. After the practice of taking artifacts abroad was banned with an initiative by Osman Hamdi Bey in 1907, no more artifacts were transported to Vienna. [Many of] the artifacts, historic statues and frescos in Vienna have been exhibited in the Neue Burg Ephesos museum since 1975. They were the gifts of Padishah and therefore completely legal. There was never a doubt on this matter. Therefore, listing the Ephesos Museum and its artifacts as 'stolen' can only be a mistake."

This is an ongoing subject of a debate and even today no definitive agreement has been reached between the related parties. Countries that have advanced museum studies usually exhibit artifacts from other countries. The legal struggle between these countries is still ongoing. The lawsuit between Los Angeles Getty Villa and Italy which ended in favor of Italy can serve as an example here. Another is the struggle between the Louvre Museum and Egyptian government.

Turkey is one of the world's leading countries in terms of the number of artifacts exhibited in foreign countries. First on the list is China, with approximately 1.5 million artifacts exhibited in other countries. Researcher Yaşar Yılmaz, who is referenced in "Sign Petition to get the Gypsy Girl Back," says that for Turkey the number stands at about one hundred thousand. The Ministry of Culture and some private organizations are taking part in numerous initiatives to list and retrieve these artifacts. To grasp the subject more thoroughly it would be a good idea to look closely at Turkey's archeological history. The first excavations on Anatolian soil were carried out by German archaeologists in 1863.

According to this new law only photographs or cast copies could be taken abroad. More information about this is available in the memoirs and letters of the Austrian ambassadors of the time. Indeed the law was sound but it lacked in effectiveness.

During that time it can be said that about 1,000 artifacts were taken abroad either at the behest of the padishah or due to a lack of control. In 1906 the law changed once again and it became harder to take the artifacts out of the country. Ottoman bureaucracy became more vigilant on the matter as well. Artifacts mentioned in the article were taken to Vienna in between 1895-1906, technically after the ban. Whether the padishah had the right to give them as gifts and whether he was above the law, is subject of debate in Turkey.

On the other hand it is natural that authorities in Vienna - after sending gifts to the padishah - to think that it is their right to possess these artifacts.
Nevertheless, it would be preferable to see their documents supporting these claims and discuss their legitimacy. But this is not a task that can be undertaken by journalists alone. Therefore, instead of using the word "stolen" it would be better to use the phrase "taken from Anatolia" or something along those lines for the sake of objectivity.

No doubt museums are quite vital in the process of finding and protecting historical artifacts. But we have to ask: Does an artifact belong to the place where it was built or does it belong to those who find it? Regardless of the law, is it okay to resort to "finders keepers?" Does a monarch, padishah or president have the right to allow an artifact to be taken abroad?

My opinion is quite clear here: The artifacts found on Anatolian soils represent the cultural and historical richness of these lands. They were produced throughout the centuries and gave a soul to its inhabitants. These artifacts belong to where they are found and therefore no authority has the right to relocate them permanently to a different country.

If such a decision were made in the past, the legitimacy of these decisions should be questioned and discussed. After all, people and foundations that represent the public authority cannot decide on history and culture.

There is also an economic aspect. The touristic value and economic earnings gained thanks to these artifacts taken from Anatolia are considered to be ill gotten.

To sum it up: I thank the Austrian Ambassador and museum officials for this polite letter to our newspaper. I agree that it is wrong to use the word "stolen" in this news article. But the layout of the article points to a very important issue and it is necessary to start a new debate on the matter. Journalists and the public in countries that have their artifacts taken from them should be better informed and pursue their rights. This is vital for all mankind. Of course this pursuit should be conducted in a polite manner and from a legal perspective while not using words such as "stolen" or "looted."
Last Update: Jul 21, 2014 1:07 am
RELATED TOPICS