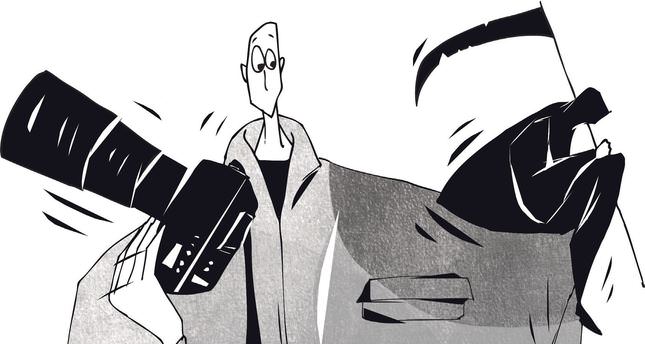 Journalists around the world constantly face challenges as they try to do their jobs, but when those challenges are presented by law enforcement agencies many media organizations seem to be nit picking whether they will protest or not depending on the country

In Kabul, Afghanistan police killed an unarmed youngster. Many protested it in the street after the event became known. The people demanded that those who were responsible be found and punished with full transparency to the public. Police tried to squash with force the protests that began peacefully. Of course this led to things getting out of hand and clashes between police and protesters became frequent. The governor of Kabul thought that police were not enough to stop the protests and militarized the police. During the intervention they started to use military equipment and tactics.

As the tensions grew both local and international media organizations sent their reporters to the area. A Qatar-based Al-Jazeera reporter and cameraman was among them. As police didn't want them to record the conflicts they tear gassed the reporter and cameraman. They also took their cameras.

Two Afghan journalists, Muhammed Hikmetyar and Gulbeddin Dostum, were sitting in a restaurant to see the event and prepare a report to their newspapers. After police raided the restaurant they asked theduo to exit the premises. Police did not let them record anything and they even thought that two journalists were not complying with their orders fast enough, so they arrested them. Another journalist, Mesut Karzai from Kabul Times, was also injured by rubber bullets shot by the police. The Afghanistan president released an official statement saying people have the right to protest but they will not tolerate violent acts. He expressed his support to the governor of Kabul. Events were on international media for hours. There were special programs featuring what is happening in Kabul.

Organizations protecting the journalists wrote reports and called upon the Afghan government. What happened to journalists displayed as an indicator how underdeveloped Afghanistan really is. It projected an absence of democracy and lack of freedom of the press and expression. Since similar events happened in Tunis and Egypt, the thought of these events were common in this area, and countries in the area ranking lower on the evolutionary tree of civilization became a more popular view.

Here are the facts

Now read the previous part of the article again but this time by changing Afghanistan to U.S., Kabul to Ferguson, Missouri. The black teenager shot by police was Michael Brown. The names of the journalists were not Muhammed or Gulbeddin but rather Ryan Reilly of the Huffington Post and Wesley Lowery of the Washington Post. The reporter injured by the police's rubber bullet was not Karzai from Kabul Times; he was a reporter working for The New York Times. The statement did not belong to the Afghan president; it was made by U.S. President Barrack Obama. On top of that they even forced a curfew in the town of Ferguson.

Apart from the last paragraph in the previous section everything happened as written. But there are no considerable protests from media organizations other than from the arrested reporters and the journalists who were working. When a similar event happened in another part of the world CNN, BBC, FOX and other media organizations cut their schedule and report on it for hours, but this time they decided to turn a blind eye save a couple of minutes in their daily cycle. No one said that the U.S. is now a dictatorship. Some of the media NGO's indeed protested the event but even they were more on the militarization of the police rather than freedom of the press. They said that even though the tactics used were wrong they were unnecessary.

In order to avoid confusion let us talk about the events by quoting Newsweek: "As scenes of chaos and photos of war-ready police equipment rolled in from protests in Ferguson, Missouri, on Wednesday, several working journalists found themselves the target of a haphazard law enforcement crackdown. Wesley Lowery, a Pulitzer Prize-winning Washington Post reporter, and Ryan Reilly, a Huffington Post justice reporter, were arrested and said they were assaulted by police while working from a McDonald's, and a video team from Al-Jazeera were forced to run as a cloud of tear gas engulfed their film equipment."

Al-Jazeera released a statement condemning the incident and calling for an investigation. The station's spokeswoman Jocelyn Austin said, "As they were setting up their camera for a live report, tear gas canisters landed in their proximity and police fired rubber bullets in their direction. Police continued to shoot after crew members clearly and repeatedly shouted 'Press.' " "Al-Jazeera America is stunned by this egregious assault on freedom of the press that was clearly intended to have a chilling effect on our ability to cover this important story."

Martin Baron, executive editor of The Washington Post, said in a statement: "Lowery was illegally instructed to stop taking video of officers. Then he followed officers' instructions to leave a McDonald's - and after contradictory instructions on how to exit, he was slammed against a soda machine and then handcuffed. That behavior was wholly unwarranted and an assault on the freedom of the press to cover the news."

Ryan Grim, The Huffington Post's Washington bureau chief, noted in a statement that "the police resembled soldiers more than officers, and treated those inside the McDonald's as 'enemy combatants.' " After being released, Wesley Lowery posted on his Twitter account: "Apparently, in America, in 2014, police can manhandle you, take you into custody, put you in cell & then open the door like it didn't happen."

These sentences belong to another arrested journalist, Ryan Reilly: "Didn't realize until just now that I was never informed of my Miranda rights." Reilly added, "I am fine. But if this is the way these officers treat a white reporter working on a laptop who moved a little too slowly for their liking, I can't imagine how horribly they treat others." How do we fare? In every corner of the world journalists are working under difficult conditions. We are in solidarity with our fellow journalists and expect more respect from the U.S. government and local authorities in terms of freedom of the press. The job of law enforcement agencies is not to hinder journalist trying to do their job, but rather to assist.

It is unacceptable to have police attacking and arresting journalists and preventing them from doing their jobs, no matter where in the world they are.
These attacks are aimed at the freedom of the press, freedom of being informed and, of course, freedom of expression. We are watching the events with ever growing concern. The events in Ferguson caused concern in all journalists and naturally we ask: "Quo vadis America?"

Another concerning development in the freedom of press is that Twitter closed an account belonging to the loose international hacker group Anonymous after they received a request from the police. They said that the reason was that the account released the name of the police officer who shot Michael Brown. It is an acceptable excuse in order to maintain safety and prevent manipulation. On the other hand though, this decision can bring with it a lot of discussion.

After all, we know that Twitter is more than reluctant to similar requests by other countries. Especially to countries it deems un-democratic. Twitter should drop its hypocrisy and release its policy on the matter. With it we can understand more clearly where they stand on the conflict of transparency and security. It will also bind their hands in the future for not using double standards. After all, this is what would be appropriate.
Last Update: Aug 18, 2014 2:29 am
RELATED TOPICS