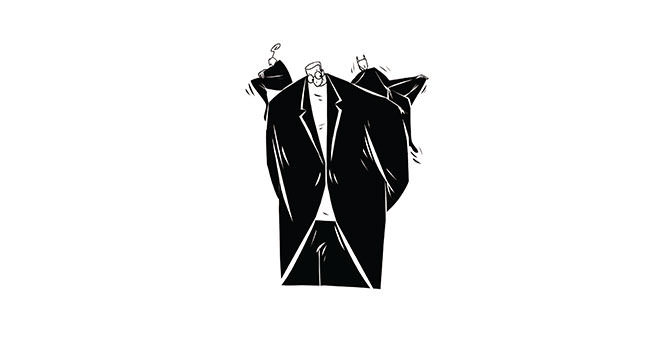 Although the right to conceal a source helps journalists with respect to both liberties and security, abusing this will only serve to inflict damage to one's credibility

"In Turkey, it has been customary to publish stories based on anonymous sources, which often leads to the manipulation of information and unproven allegations or rumors."

The sentence above was quoted from a brochure called "Ethics Code for Journalists in Turkey." It was written during a three-day "Media Ethics Workshop" organized by the Media Association and International Center for Journalists in January 2011.
The instructors in the workshop were Sherry Ricchiardi of Indiana University, Frank Folwell of USA TODA Y and Alper Görmüş, an independent Turkish journalist. Journalists from various media companies in Turkey, representing a wide political spectrum, wrote the codes.

If we return to our subject, the sentence quoted above reflects quite an accurate assessment as well as a credible worry. Turkey experienced a post-modern coup known as Feb. 28, 17 years ago. The Armed Forces intimidated an elected government with the help of the media and even forced them to resign from their posts. If one were to examine the headlines and newspapers from those times, he or she could easily see that the media played a pivotal role in the coup by the military. One of the most used methods while doing that was the usage of "anonymous" news sources. These anonymous sources were sometimes defined as an "official from the high command" or "a decorated officer from the army." Newly surfaced information shows however that most of these sources were actually journalists who were even more coup-friendly than the officers themselves. In other words, these journalists wrote the news with their own agenda. One of the most memorable headlines of these newspapers was "Young Officers Disgruntled." Even today we do not know who these officers were, how many they were in number or how they relayed their "disgruntlement" to these journalists. If you can hear us, please raise your hands.

How do we fare?

Let's go back to ethics. When it comes to sources, journalists should: "

Make sure that there are no conflicts of interest in the relationship with the source that might weaken the credibility of the reporter or the reporter's news organization."

This also requires journalists to be wary of carefully planned conspiracies. There are many instances where investigative journalism is used as a tool to deceive the public by using fake sources. "Be careful that they have no material ties with the source they could not account for."

Apart from being real, even the slightest doubt on the matter will result in a loss of credibility of the journalist. Even if a journalist obtains information from an old friend and uses this friend as a source, from now on the journalist must be careful with his or her relations with this friend. "Be certain of the truthfulness of the allegations made by the source."

Use of anonymous source

"Under the ethics code all sources should be named unless there are special circumstances."

Before protecting the anonymity of the source, answers to these questions are highly important: "Will the information the source provides place them or their significant others in danger or cause social complications for them?"

Let us say that our source is a repentant ex-mafia member and reveals information on the mafia's criminal activities. If we divulge the source's identity, we also may place the source and his family in a life-threatening situation. Therefore, in similar situations it might be fruitful to hide our source. There are instances where sources talk about the mafia terror in their neighborhood were named, and they were killed upon publication of the news. "To what extent does the information concern the public? Is it important and have significant impact?"

Even though a story excites the journalist, it might not do the same for the public. Or publishing a story might not serve the interests of the public in any way. In such events, it is always important to ponder whether to publish such news or not. "What motivation does the source have for providing this information?"

The aim of the source could be revenge or to harm others. In this case we must find out whether our source has any evidence for his claims. "Would the credibility of the report be subverted if the source were to be kept anonymous?"

Sometimes if a journalist chooses to withhold the name of the source, the public can be unsatisfied, and it devalues the news.

As with the examples at the beginning of this article, if these anonymous sources keep appearing frequently, it hurts the credibility of the news organization itself. We have to be careful on this, and if the situation demands it, not publishing the story might be the right choice.

Be sure to clarify conditions attached to any promise made in exchange for information. Once a promise of confidentiality is made, it must be kept.

In that case, the situation should be discussed with newsroom managers, and information about why the source has been granted anonymity should be shared with the public.

If the decision is made to grant anonymity, reporters should reveal the identity of the source to their editor if the editor requests it. The editor, as well as the reporter, must honor the commitment to confidentiality."

Last but not least

Another common situation in both Turkey and the world is this: Some individuals or organizations tell journalists they possess important documents and information that holds great journalistic value. But they usually have a condition. They say that information will be available in exchange for a promise to publish it. Otherwise, they threaten the journalist that they will give the news to another newspaper, and they will be the one breaking the news.

This can lead the journalist to make a mistake because of constant competition. But we have to explicitly tell them we cannot publish it without reviewing it in light of the ethics of journalism.

Finally we have to remember, if we do not divulge our source, the reason for that must be present in the news. Otherwise, the newspaper will lose its credibility and the usage of sources becomes discretionary.
Last Update: Sep 15, 2014 2:15 am
RELATED TOPICS