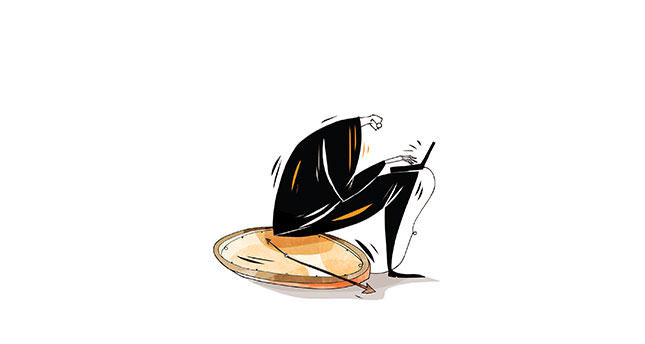 As the world and its norms undergo a metamorphosis, legislators should transform laws to better suit today’s environment. The laws concerning journalism are no exception

Thanks to its nature, journalism is an ever changing profession. Not its main principles and priorities perhaps, but its conduct and methods do change.

Not so long ago, maybe 15 years back, all talk began with "since the world is globalizing," but now no one feels the need to emphasize this.

Improvements in transportation, communication and technology have delivered the world to our fingertips.

Some countries are lagging behind on this endeavor though. For example, Turkey had its first private television channel 25 years ago. It was a huge thing back then, but now even the main nature of broadcasting is changing. To put it more bluntly, in Turkey there are roughly two thousand websites with only a ".tv" domain name.

While even the sizeable portion of Turkish media still struggles with the term "freelance journalism," there is now even a discussion of "citizen journalism."

So how do the laws about the press stand up in the face of a de facto structural metamorphosis?

No doubt they are quite outdated. Especially the foreign journalists who operate in Turkey may have witnessed this clearly.

First, the law pertaining to the work conditions of journalists was prepared in 1952. With a couple of changes in 1961, the law stands absolute even today. The reasons for the changes are interesting though. Let me summarize: Republican elitists not only joined bureaucracy and politics, they also rendered the press to its beck and call. The press was expected to protect and relay the Republican ideology rather than conduct free journalism and promote the freedom of expression and thought. In other words, the press was designed as a simple propaganda tool and any other thoughts and ideas were highly frowned upon.

Turkey held its first democratic elections back in 1950 and the Republican People's Party (CHP) – the founding party of the Republic – lost the elections to the Democrat Party (DP). The DP also won the two following elections in 1954 and 1957. These bureaucratic and intellectual elites thought there was no democratic way for them to remove the day's administration, and so they laid the groundwork for the military coup in 1960. In this process, the press became an ideological tool and was used by these elites. It conducted smear campaigns and prepared many false reports against the DP. These false reports were even used as so-called evidence in military courts after the coup. Of course the truth came out in time.

The law I previously mentioned was prepared in this atmosphere. Journalists received privileges unlike any other profession. It might seem this was aimed to better the working conditions of journalists, but the aim was to transform journalists into an ideological tool tied to the state. And to an extent, it was fruitful as well.

The law has certain clauses that render journalism different from other professions in matters of severance pay, military service, pregnancy, period of notice and retaining fees among others. The reason was simple: lawmakers thought that journalism was a profession where mental labor outweighs physical labor. The law defines journalists as mental laborers. Even that definition shows how much Marxism held sway over Turkish elites back then.

There is, however, a peculiarity. A sizeable portion of journalists in Turkey do not fall in the above category because the law requires higher obligations from employers compared to other work-related laws. Therefore, a lot of journalists sign their contracts under the regular labor law. Let us look at some statistics. In Turkey, there are 40 national and hundreds of local newspapers as well as hundreds of magazines. But there are no more than 10,000 people recognized by law as journalists. The law also doesn't recognize freelancer journalists or internet media.

No patch-up this time

Ontological problems stemming from the law can't be solved by hard inspection measures. Flaws in the law can't be patched up by case laws. A law that doesn't rely on the realities of society and the sector can't be fixed with redactions. Changing the words, sentences or even whole articles doesn't work either – we must change the logic and the system behind it.

My colleagues will probably be angry with this but I have to say it. Seeing this law as a gain and persisting to retain it even though it practically doesn't involve most journalists and is problematic in its implementation doesn't seem right to me.

There is no need to be caught up with the allure of legal esotericism here. After all, while winning a conflict an entire war can be lost. We must focus on strategic and systematic changes rather that tactical and palliative ones. We must protect the rights of all of our colleagues rather than the rights of our own federations or trade associations. We shouldn't frown upon our "new" colleagues by saying, "Where did they come from?"

Here are some of the points I would like to emphasize:

Let us start with the legislation and administration. It is high time for legislators and the administration to stop writing laws classifying who is and who is not a journalist. The right course of action here is to try to understand. Even if there is a definition to make it should be about the action rather than the person.

First of all, action should be taken with a broader perspective. This should be followed by preparing legislation for the people who do this action regularly in exchange for a fee. Also, new media forms such as Internet media and freelance journalism should be included.

Society needs many professions in order to function properly. While journalism is indeed one of these professions, it does not mean others are less important. After all, everyone thinks their work is significant.

Therefore, new legislation should not damage the idea of social justice otherwise it will only serve to create a gap between other professions and journalism. The arguments should be about rights rather than privileges.

Every profession has its own necessities, details and, of course, hardships. In this light, journalists should receive the necessary tools to help in journalism, not privileges like they were given before. The social balance shouldn't be disturbed for the benefit of a single group.

Legislation on the press is both old and confusing. In some cases the articles of the labor law are implemented to the word, which is highly unnecessary. My take is that there is no need for a different press labor law. There should be a single labor law just like in the French legal system. The articles pertaining to journalism should be under that type of legislation.

We must consider not only social balances but also the balances in the private market. Technological and economic transformations are forcing conventional media to minimalize. Profitability falls while unemployment rises and, therefore, on the "journey to protect journalists" we might as well face the risk of bankrupting journalism.

We must look at the bigger picture and ease the tensions between employees and employer while finding ground for reconciliation, otherwise this dispute will cause the media sector that operates on an irrational economic scale to become even more economically irrational and the tides will sweep us all away.

Today, the world and journalism change at an astonishing speed and we do not have the luxury to battle legislation.