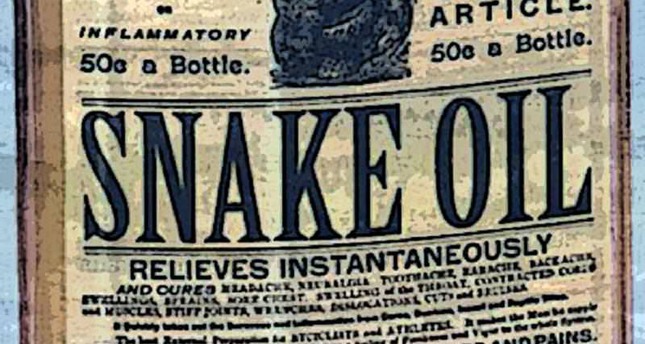 by İsmail Selim Eşsiz Oct 13, 2014 12:00 am
Of all the western movies you have seen up until this day, it is most likely that a sizeable amount of them have featured a snake oil salesman, a role which has for a long time been an important stereotype in the Wild West culture. For those who are not well versed on the subject let me elaborate. A doctor comes to a run-down and far-off town in Wild West America, his carriage being pulled by a sickly horse. He claims he has medicine that will cure anything you can think of; it will help sore joints, infertility and even a patient in his death bed. Of course unconvinced townsfolk gather around the so-called doctor. An accomplice or accomplices of the doctor start to attest to the value of the product in order to boost up the sales. With honeyed words sales go through the roof and before anyone can attest to whether they have been conned or not, the doctor and his accomplices are already gone with the wind. That is a snake oil salesman.

Today in Turkey, when we peruse through a news website we will usually see at least one news article about medical accomplishments in the breaking news section. The title promises so much but when we start to read the article we discover that all it has is some arbitrary development about a disease. Of course all developments in medicine are important but not all of them are a definitive or complete cure. However, if we were to believe these headlines then obviously every day there will be a new cure for cancer, AIDS, diabetes and the new hot topic – Ebola.

Back in the day, the United States tested and isolated the ingredients of Stanley's snake oil, produced by Clark Stanley. It consisted of mineral oil, 1 percent fatty oil (presumed to be beef fat), red pepper, turpentine and camphor. Following this inquiry, the government banned the snake oil, which has become the colloquial title for all charlatan medicine.

Let's do something similar. In the above mentioned types of news articles there are several recurring themes. Firstly, as we said, it has to be about a disease that is either deadly or common or both and it has to be without a definitive cure. Secondly, the effectiveness of the ingredients must be ambiguous. As it goes for scientists – usually unnamed – and research centers that are either very famous or not known are all equally ambiguous when it comes to how developments will be effective in the search for a cure. Lastly, and most probably the worst thing is the title of the story. The title that people usually click is often along the lines of "Cure for X" or "Critical development in X" et cetera. Do all of the above and you can easily call yourself a snake oil journalist.

There are two big problems with this concept. The first one is that this kind of news writing disregards numerous ethics of journalism and therefore from that perspective it is very wrong. But I fear the second problem is even worse. In doing this people are selling hope and false hope at that. After all these websites gain from the clicks and allow many readers to think maybe this time it will be true, they only end up being disappointed. I am afraid that at this rate, even when a definitive cure is found for let's say cancer, the media will have a hard time convincing readers it's real.