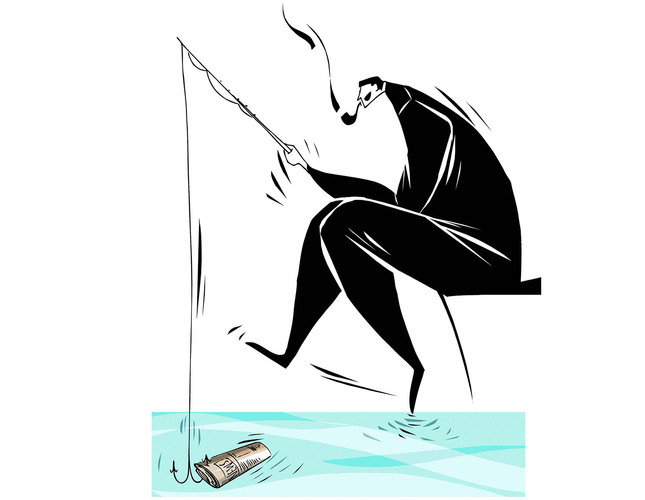 With the developments in technology, the need to keep up with the speed has given rise to the necessity of increased quantity, forcing traditional media to abandon individuality in journalism

When we look at the past, the old media represents a lake. Different news from varied sources were collected in a pool and, after a process of elimination, the rest was presented to readers and viewers. When you picked up a newspaper in the morning or watched the prime-time news, you were actually looking upon this lake.

However, rapid developments in transportation, communication and information technologies have changed all that. Today's media has turned into an endless river spanning farther than the eye can see. The calm, quantifiable lake is no more. It is nearly impossible to keep up with the river. Not just for the individuals, but this also applies to newsrooms as well.

News pours in like a torrent every minute. When the river is bloated it sometimes turns into a destructive flood, sweeping away everything in its wake. This causes readers and viewers to adopt a shorter memory when it comes to news because upcoming news forces them to forget previous reports.

Reporters on the Internet are like surfers trying to manage these information waves. They ride the waves and race each other to be the first one to reach and report the news. Right and wrong, beauty and ugliness are disregarded and, in the shadow of the race, the lines between them become blurred.

The rapidity of the flow also causes certain shallowness. Yes, the river enhances its bed but never digs deeper. Therefore, the requirement for rapidity is both the upside and the downside of Internet journalism. Usually the richness of the story is never relayed and it only consists of the answers to "who, what, when, where, why and how." They start to lose perspective and the differences between different news sources – their individuality – become nonexistent.

This problem is mainly related to Internet journalism, but the danger is present for traditional news media that fail to stand in the correct position vis-à-vis Internet media.

Printed newspapers in Turkey are a fitting example. Let's consider mainstream newspapers. Daily newspapers feature around 250 articles, while the paper's website features around 600. The difference in quantity is vast. While a newspaper is only printed once a day, the website can be refreshed every moment. Even though news articles are usually uploaded on the website, it is not enough to feed it.

Aside from this we, have to emphasize another problem here. As technology has become more and more advanced, the number of reporters has decreased. In the past newspapers had a reporter in every city of their country of origin and quite a few in other countries, but now it seems to be a burden, an expense. After all, they can follow news from agencies or the Internet. This has caused the monopolization of agencies in the sector. A sizable portion of newspapers are now filled with content provided by agencies to their subscribers.

When we look at two different newspapers from the same country we can see that quite a lot of the articles are actually the same, simply because they share the same source. They took the news from an agency and, without any further research or confirmation, printed it. There you have it, a barren and uniform media and the end of different types of journalism.

We cannot, however, discard that storytelling is a game changer. It is clear that traditional media cannot compete with Internet news in terms of speed. Therefore, it is only logical to change the competition into an area where traditional media can claim superiority. This area would be depth and perspective. Traditional media should not be satisfied by just being a compiler – it should change perspective and provide more depth in its news.

How though? We cannot talk about a single formula for salvation, but we can provide a few points. Let's take a step back and focus on the stream in a calm manner. Let's try to solve the relationships between cause and effect and seek answers to "where did we come from?" and "where are we going?" Let's rewind and fast forward. Instead of a dry news article, focus on a more satisfying story. Instead of giving readers information shock, let's do thought-provoking news and analyses that inform them.

By doing so, we can prevent the newspaper from being swept away by the river. It elevates the value of the brand and gives it an air of originality and readers appreciate this.

Of course we mean more than words and sentences when we mention storytelling. Sometimes a photograph taken at the right moment and from the right angle can tell the story better than a 10-page text. And sometimes a well prepared infographic can save you from redundant text and photos.

I think it is important to emphasize the use of infographics. We are living in an era where visual aids are supreme. On top of that, the average time a person pays attention to an article is getting shorter and shorter. When we combine these two, the need for a hook that grabs a reader's attention is clear. This hook can be an infographic.

We can find the origin of infographics in the paintings featured on cave walls. But there is no need to go back that far. If we are talking about infographics in today's context we must mention one of the first names in the field, David Macauley, the illustrator for Neil Ardley's book, "The Way Things Work." This book almost only contains infographics.

Infographics are a common solution that newspapers employ and they are used to transform complex data into a visual graphic that organizes and puts it into perspective. USA Today and The Guardian are two good examples to these types of newspapers. However, newspapers in Turkey do not seem to understand its importance yet, including Daily Sabah.

When news stories cover a long period of time and require a chronology, articles aiming to compare two or more things and articles filled with data will be much more understandable and will promote interest in the newspaper if a well-prepared infographic is used instead of plain text. Let's not forget it is harder for a graphic to evaporate than the text itself, and this will help news become more permanent.