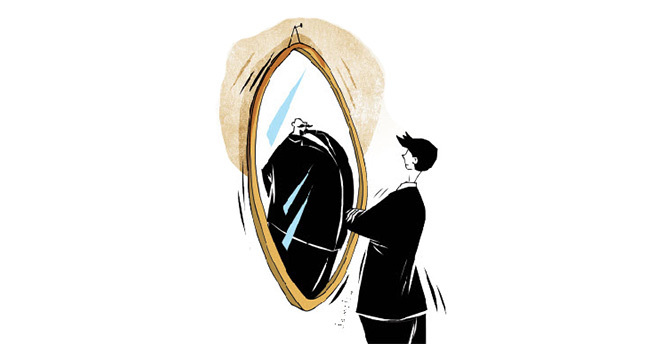 The media, while accusing others of hypocrisy, should be careful not to commit the same mistake. It should also refrain from persecuting a person for the transgressions of their family members

Two weeks ago we wrote on the normalization of violence and discrimination against women at the hands of the media in our article "Patriarchy of the Media." The main reasons cited were male-dominated language and a male-oriented approach in the news.

This subject is not new. Every once in a while media organizations release statements about how they approach the subject with sensitivity, yet they continue to make the same mistakes. Last week a news article in Turkish newspapers showed us that media is not cured from this disease and sometimes can even turn into the oppressor itself.

The news in question first appeared in Hürriyet daily with a headline that translates to "Look where the daughter of İnançer, who is against women working, was appointed." Hürriyet published quite a bit of news articles on the subject. One of them summarized the events as: "With his statement, 'Economic freedom for women is a fraud, working women destroy their homes,' Ömer Tuğrul İnançer was subjected to a lot of reactions. It turns out his daughter was appointed as the corporate communication director of a big company."

In the Hürriyet article the woman's name was not given, only her initials, as is the common practice in the media when victims or criminals are concerned. This behavior by Hürriyet shows the subconscious problem. They do it under the pretense of protecting the daughter but they are well aware that the article will aggrieve the woman.

The Gülen Movement-affiliated English daily, Today's Zaman, was not late to the party. It published the story with the headline, "The daughter of Sufi cleric advising women not to work is corporate exec." We should also take note of how a Gülenist newspaper targets another community's leader.

Let's look at the first sentence of the news article: "The daughter of Turkish Sufi Sheikh Ömer Tuğrul İnançer, who had advised against women being employed, was recently appointed to a top position at a leading GSM company."

After these news articles on social media networks such as Twitter and Facebook, a campaign against Tuğrul İnançer began. There were not many questioned as to whether these articles were true or ethical. In other words, the traditional media's wolf journalists threw a piece of meat and social media pups did not hesitate to chew it.

During the campaign, another statement by Ömer Tuğrul İnançer was put forth: "It is immoral for pregnant women to go out on the streets." However, İnançer never made the statement as presented above; one of his speeches on television was summarized as such by journalists. On the other hand, nobody seemed to care about the injustice toward the supposed main subject of the article, İnançer's daughter.

Attack on both fronts

Who is the actual subject of the article then? Who is Eren İnançer Luş? She studied psychology at Istanbul University and got her master's degree in public relations there as well. She started to work in public relations and held positions in many large-scale companies such as Vodafone Türkiye, İş Bankası, Boyner, Shell, Nestle, Philip Morris and Roche. In November 2014, she was appointed as the corporate director of Avea. Considering Luş's resume and experience in the sector it seems a very straightforward appointment.

First let me say this: Eren İnançer Luş has been actively working for years. When the statements attributed to her father first came to light, she was a manager in the same sector, yet the subject was never mentioned at that time. Newspapers also failed to produce any type of evidence saying Luş used her father's influence and connections to get the appointment. But that did not stop them from presenting the story as Luş did not deserve to be in that position. No doubt this was an ill attempt at a smear campaign.

Secondly, another point needs to be emphasized. Even if you do not agree with what Ömer Tuğrul İnançer said and condemn his statements, painting a target on his daughter's back because of what the father said is grave injustice. All individuals are responsible for their own actions and words. No one can be accused of hypocrisy because of the actions of their family members. Eren İnançer Luş is an independent individual and it is quite normal for her to disagree with her father and choose differently. No one can accuse her because of that.

In these articles a woman was targeted, exposed, her right of privacy was trampled on and her professional standing and connections were put into jeopardy even though she clearly carries no blame.

A different aspect of the issue is the wrongfulness of the media's self-proclaimed role and patriarchal perspective. Media tried to hold someone accountable by giving the message, "You are saying that you are against women working but first make sure your own daughter sits at home." Everybody knows that in a civilized relationship a father should not have authority to organize his daughter's life. It is presumptuous and ignorant to hold a father accountable for his daughter's life and attempt to relay the message: "He can't even influence his daughter."

In their current state, these articles are an attack on freedom of expression. Also, in the first article there was no platform for rebuttal given and in the following ones they still did not let those concerned reply completely.

The sad part is no women's rights organizations or the media's so-called women's rights defenders voiced any serious protest over the issue. Because of the polarization in Turkey and political positions the subject was ignored completely. The anger toward the father reflected on the daughter and the campaign of the media was taken for granted. Writers and media organizations who call themselves liberals championed this discrimination.

There are exceptions though. One of the most notable articles on the subject came from Gökdemir İhsan. He said in his article from afillifilintalar.com:

"Is the lady hired because of her father's pull? Media can't tell this openly but implies it. Because they know this slander will have legal repercussions. Nevertheless, they confess tacitly that this is not the case. After all, the lady in question is a competent woman and holds a master's degree in the field, not to mention having worked in very important companies in the sector.

Let's get to the point. It is clear that the media did this because of other groups or political interests. These guys are gaining something through this distortion. Where are you standing my friend? Or has your freewill and skeptical intellectual persona made you a slave of the media, working for free?"

Indeed, a question of importance. Before joining the mob in the campaigns orchestrated by social media users and foreign journalists writing on Turkey, it would be beneficial for a person to ask themselves the same question. Are you going to accept anything you hear without question and continue to take part in or turn a blind eye to injustices as long as they are not toward you?