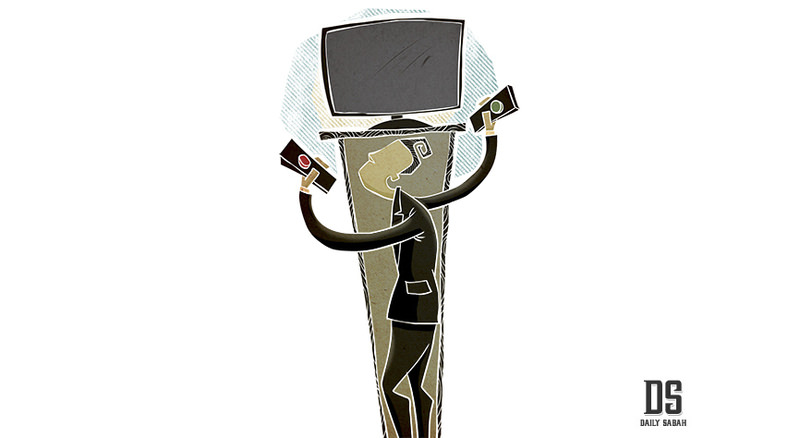 With the Nov. 1 general elections behind, archaic laws and their unjust effects left a disturbing picture, with harsh penalties punishing not only their intended targets, in this case television channels, but also their viewers

Once again we are left with the usual aftermath of elections. Tasked with overseeing the elections, the Supreme Election Board (YSK) meted out numerous broadcast suspension penalties to several private television channels for biased broadcasting. As most of the penalties were given to pro-government television channels such as A Haber, 24 TV and TV NET, a question looms: Were they singled out?

These penalties are not the product of today, however. Their origin is much more obsolete and the child of a different period in which private television channels did not exist. As only one channel existed at the time we are speaking about, and it was owned by the state, it was deemed necessary to limit its practices to allow for an unbiased election process without giving the party in charge too much power. The law dictates that every party that takes part in the election process is owed equal coverage to ensure political impartiality. This impartiality has to be maintained whether the channel is airing news broadcasts, talk shows, discussion programs and the like. However, this law, which was written in 1974, still continues to dictate the conduct of television channels as if there is still only one even though they now number over 100.

The penalty of suspending broadcasts is quite harsh as well. A channel that receives the penalty is compelled to broadcast previously selected and approved documentaries by the YSK – a very heavy method indeed. But before going on about the downside of the law and the penalty, let us take a look at my previous article on the same subject. On July 12, 2015, in an article titled "Limiting media with archaic practices," I wrote:

"We also see that these penalties are not distributed equally, and some channels are singled out and receive harsher treatment. During the last week TGRT Haber, A Haber and 24 TV were the frontrunners in penalties received with nearly 100 broadcast suspension penalties combined. These three are all channels that can be described as pro-government. This also shows the government itself has no effect on these penalties."

From that we can see that not only were we dealing with the same problem in the aftermath of the previous elections, the targets of the penalties remained the same throughout the period as well. So the question we asked first is also answered in a sense.

Dubbing the penalties given wrong or absurd is no argument. No television channel can give equal coverage to all parties on the ballot. It is a technical impossibility. There were 16 parties running in the Nov. 1 elections, and that does not include the independents. This number has been over 20 in the past as well. Another factor is that while some of these parties conduct engaging election campaigns, some do not even hold a single rally. Asking channels to divide their broadcast time in 16 equal parts can only invite laughter. Also, considering there are more than 100 television channels, it is safe to say that even if one channel does not feature a particular piece of news, others will likely pick up where the other left off. As a channel cannot tie down its viewers and force them to watch its broadcasts, the decision to pick which channel to watch is left entirely to them.

Injustice does not end there, however. Television broadcasting is not the only form of media, and no longer the rising star, either. New media platforms such as news websites are not subject to the same treatment from the YSK. Being a new platform, however, does not define the treatment, as we see that traditional media platforms such as newspapers are also exempt from this treatment. So we can only ask why television channels are the only ones to suffer from this absurd law.

Of course, the last thing we would want to be is the bearer of bad intentions that pave the way for the YSK to avert its gaze from these other platforms. So we use the word injustice to underline the state of the situation and not to imply that all should suffer the same. Rather, we ask that none should be subject to this obsolete law.

Television channels, however, are not the only subjects of these penalties, as their viewers suffer just the same. We said above that channels cannot force viewers to watch them, but what the YSK does fits the bill more accurately. By forcing documentaries, they take away the right to watch a broadcast as intended, forcing them to either watch the YSK-approved documentary or click away. Acting on its own, the YSK decides on these issues with an authoritarian and irresponsible manner. These decisions exist as a clear threat to media freedoms and democratic rights of viewers.

Editorial independence is another right trampled on in the long list of violated freedoms. By forcing private channels to act in a uniform fashion, the YSK imposes an aggressive singular type that is no worse than forcing them to broadcast in favor of a single party.

Everybody should understand that only one power is justified in reviewing the broadcasts of a media organization, and it is neither state officials nor institutions, but viewers. Insisting on holding on to a forlorn past and ignoring improvements and developments in media technologies has no place in today's world. Lawmakers and law enforcement organizations must understand the difference between state broadcasting and private broadcasting as promptly as possible. Destroying the colorful differences that exist across hundreds of different television channels to shape them into the grayness of a single mold is wrong and will have dire consequences, and doubly so when the methods are unjust and the motivations are political.

The YSK must become more democratic, transparent and just posthaste. The legislative branch can no longer stay indifferent to the situation as well. Parliament must change the laws that result in serious abuses and only used to manipulate the media to maintain a libertarian record.
Last Update: Nov 09, 2015 2:08 am