Cooking up a fictional image 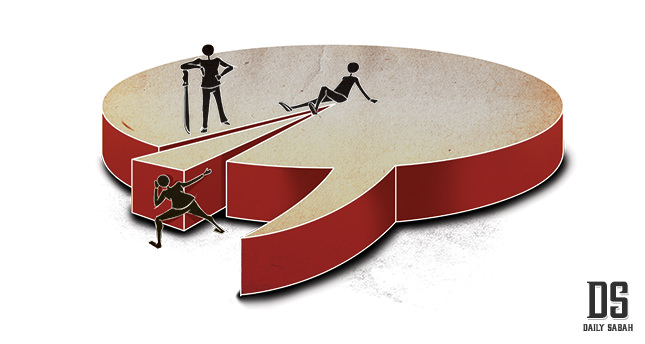 The opposition and Western media took Erdoğan's statement about Hitler's Germany out of context and ignored the official clarifications from the presidency, once again letting their lack of insight or abundance of bias misrepresent the facts

The advancement of technology led to social changes over the last decade. There were times when our everyday language could not keep up with technological advances, leading to a relatively new definition of political correctness in today's discourse. While the need to be politically correct was necessary at times, lately we have seen it being used as a tool in the propaganda war to distort information, redirecting and confusing the audience.

We also now know that saying anything about Hitler or even mentioning Hitler's Germany in a speech is taboo – somewhat of a sin, regardless of meaning, tone or purpose – especially if you have a long track record of having your words taken out of context by opponents who have a history of distortion. Let me elaborate.

Upon returning from an official visit to Saudi Arabia, President Recep Tayyip Erdoğan held a press conference at the airport and was asked whether the presidential system that he advocates for could exist within a unitary state.

Erdoğan explained that presidential systems do not necessarily require a federal government. He asked: "Why not? There are many examples in history and today."

Then he cited Hitler's Germany as an example, not saying it was a good one or an effective one. On the contrary, he said: "The most important characteristic of a governing system is to act on the principle of justice and for the people's expectations to be met."

Considering how anti-government media outlets have compared Erdoğan to various dictators on numerous occasions in the past, this was too good of an opportunity for them to pass up. The Turkish media jumped on Erdoğan's statement and misconstrued it. The metaphor regarding Hitler's Germany was quoted and highlighted by these media outlets without putting it in full context. This led to many people taking to social media and spreading the president's misconstrued message. In the end, damage was done on the local scale. But what does it mean on the international stage?

We were not surprised on that front, unfortunately. International news agencies, papers and magazines were all misled by either Turkey's anti-government media or their own reporters who share the views of the Turkish media critical of the government. They immediately joined the chorus without thoroughly researching the facts, or even listening to the full speech. Considering how the naysayers in the media have been benevolently warning that Erdoğan has become authoritarian, comparing him to Hitler was an opportunity too good to refuse when it was presented on a silver platter.

Here are some headlines from the international media to show the scale of the distortion:

"Erdoğan says Hitler's Germany exemplifies effective presidential system," from Reuters; "Turkey's President Erdoğan cites 'Hitler's Germany' as example of an effective form of government," from The Independent; "Erdoğan cites Hitler's Germany as example of effective government," from The Guardian; "Turkey's president wants to be more like Adolf Hitler," from Time; "Turkey's president says all he wants is same powers as Hitler," from The Telegraph, and "It's No Surprise That Turkey's Erdoğan Likes Adolf Hitler's Government," from the Huffington Post. Unfortunately, while all of these titles sound perfectly sensational, none of them reflect the truth of the matter. Erdoğan did not say or imply such things. It is obvious that Erdoğan's comments were misconstrued.

Later on, the presidency released a statement explaining: "Erdoğan's 'Hitler's Germany' metaphor has been used in the opposite sense."

While the headlines captured the essence of the problem, I believe the Jan. 6, 2016 dated editorial by The New York Times deserves special mention. The editorial's remarks on Erdoğan's speech were along the lines of others in terms of tone. But there was another mistake as well. Here is the relevant part from the article:

"Like Turkey, the United States and Europe consider the P.K.K. a terrorist group. Before fighting resumed, Mr. Erdogan had made progress in negotiating a peace agreement with its top leader, Abdullah Ocalan, who is in prison serving a life sentence. More recently, however, his prime minister, Ahmet Davutoglu, dismissed the H.D.P. [Peoples' Democratic Party] as an extension of the militants and has refused to hold talks with its political leaders until they prove themselves 'a serious and genuine political party' – whatever that means."

The article suggests that it was Davutoğlu who caused the dismissal of talks with the HDP, but left out the reason quite available in various Turkish media outlets. One is from this very paper's Dec. 26 article: "PM Davutoğlu cancels offer to meet with HDP on new constitution," which says: "The reason for cancelling the offer was cited as the recent announcements coming from HDP officials targeting the government away from at least political kindness and aiming political polarization amid the ongoing clashes with the PKK terror organization."

What were these statements though? This time let us quote Hürriyet Daily News in order to show the availability of the said piece of information. Its article: "Turkish PM cancels meeting over constitution, accuses HDP of violence," published on the same day as the one above, says: " 'Quite apart from the fundamental right to life, if the prime minister visits us without recognizing the people's right to breathe and their right to bury their loved ones, then he will only be offered a cup of 'kaçak çay' and then leave,' HDP Ankara deputy Sırrı Süreyya Önder told reporters, referring to Davutoğlu's meeting with the HDP's co-leaders scheduled for Dec. 30."

In other words, the HDP said that in order to have talk on the issue, it demanded that there had to be no issue, which is paradoxical on its own. Why would there be talks if the reason for talks is nonexistent? As a side note, "kaçak çay" means smuggled tea.

Following Önder's comments, the Prime Ministry said in a written statement: "The administrators of the HDP have once again proved that they do not possess the maturity to utilize politics as a means of problem solving."

The New York Times' editorial, however, left that part out. Nevertheless, there you have it. From two major English-language media outlets in Turkey, the reason why Davutoğlu "refused to hold talks with its political leaders until they prove themselves 'a serious and genuine political party' – whatever that means," is put forth. In other words, this is what that means.

Going back to the original issue of the article, Erdoğan's comments were meant to demonstrate that an executive presidency can exist in a unitary state and does not depend on a federated system of government, and that neither a presidential nor parliamentary system is a guarantee against abuse of power.

"If the system is abused it may lead to bad management resulting in disasters as in Hitler's Germany. ... The important thing is to pursue fair management that serves the nation," a statement from the president's office later said, adding that it was unacceptable to suggest Erdoğan was casting Hitler's Germany in a positive light.

Once again, hatred for Erdoğan has blinded local and international media and we have seen Erdoğan's image being used to enable journalists to violate the basic principles of journalism. In other words, business as usual on the Western front.
Last Update: Jan 25, 2016 11:30 am
RELATED TOPICS