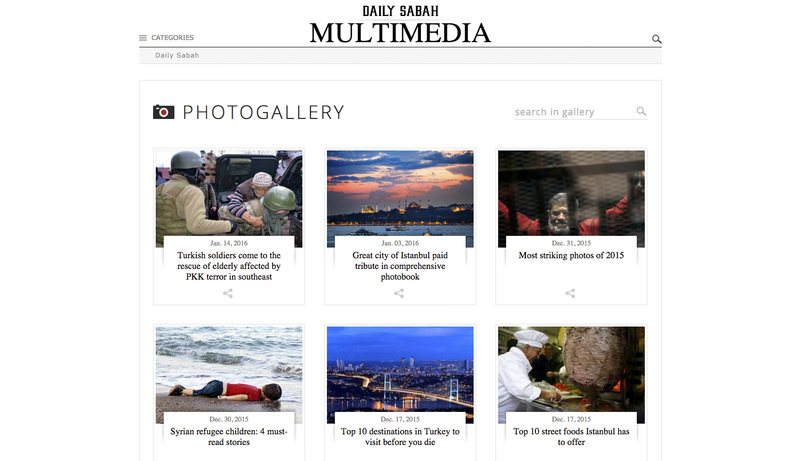 by İsmail Selim Eşsiz Jan 18, 2016 12:00 am
It is no secret that as the ombudsman we have been paying quite a bit of attention to the use of photographs in Daily Sabah. My articles on the subject, as well as those of İbrahim Altay, emphasize that photos are part of the content, and the initial problems with bylines and photo signatures have been improving as a result. We will see in the coming weeks just how much improvement has been made when we conduct an extensive review of all of our issues. So, let this be a notice for our editors if they have been slipping up.

In any case, this week will focus on a different section of our newspaper, that of the gallery section of the Daily Sabah website. The gallery section has been up and running for quite some time now and is updated quite frequently. The most recent layout was implemented in the last quarter of 2015 and has received special attention since then. The gallery section left more to be desired in the early stages, and we have waited for it to develop enough to be considered a substantial part of the website.

With over 150 individual articles to its name, the gallery section has attracted quite a bit of attention from our readers as well. Ever since recent improvements were made to its layout, news articles from the section managed to make the Top-10 list that we publish every week at the bottom of this page. A similar list can also be found on the website.

Having a gallery on news websites is a relatively new concept in Turkey, but ever since its creation, the system has become a tool to bring out the visual side of news. Another main contribution the system has made is it has increased traffic on the Daily Sabah website, with the number of hits it is generating becoming the lifeblood of the site, which bases its income on advertisements rather than revenue brought in by steady subscribers. However, the number of hits brought in by the gallery section has also led to increased abuse by websites, and the quality of website content has been steadily declining for some time, resulting in disapproval from readers. Many news websites have started to break up news stories incompatible with the format of galleries to enjoy repeated hits and have also started to publish sloppy content to increase online traffic. However, as a business model this has proved to be unsustainable, as the reader base will always look for greener pastures and will not tolerate a decline in credibility that badly implemented gallery sections cause.

Thankfully, Daily Sabah's gallery section has been carefully avoiding the bait-and-switch approach, especially since it is 2.0.

News articles have been either very compatible with the format or the format has been tailored to be so. The visual aspect has been good as well thanks to the careful selection of photographs. All in all, the gallery system is a fully functioning part of the website, as indicated by the attention it has received from our readers. However, there is one problem occurring frequently enough to warrant mention in this article. First of all, the signatures of the texts are an issue. Texts accompanying images are either the product of the editor who prepared the gallery or the news agency. Therefore, this must be clearly indicated in the same way as other news articles on the website. The missing signatures accompanying photos are less frequent, but are still a problem. Considering the heavy format of the images section, the sources of these photographs must be present to give credit where credit is due. Regarding the positive track record of the website, when it comes to photo signatures, I hope the gallery section will catch up to the rest of the website. We will revisit this issue in the future and hopefully have improvements to address.
Last Update: Jan 18, 2016 1:00 am
RELATED TOPICS