Media attacks are not statements 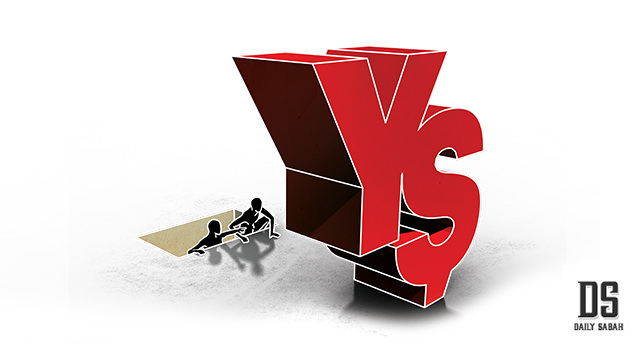 Since last year, Turkey's agenda has been largely occupied with the renewed problem of terror. The violent atmosphere imparted by terrorism also led to attacks on many sectors that were thought to be largely neutral until now. We have seen attacks on teachers, doctors and paramedics and, of course, journalists.

Unfortunately, attacks on journalists in Turkey have had a tendency to evolve into attacks on journalism en masse, as the targets are no longer individuals in the sector, but entire media groups. The latest of these attacks took place last week in the early morning of Feb. 11. Masked assailants attacked the headquarters of the Yeni Şafak and Yeni Akit dailies in Istanbul with Molotov cocktails and pump-action rifles. Thankfully, there were no casualties or wounded, and while we count this as a small blessing, we have to focus on the problem itself.

Another unfortunate truth is that the attack was not unprecedented at all, as this was not the first attack of its kind on media organizations. The 1990s was a dangerous time to be a journalist in Turkey, as terrorist and various criminal organizations murdered journalists to make a statement. January 2007 was a reminder of those times when Hrant Dink was gunned down, causing both outrage and solidarity.

A more recent example took place last year. Let's look at a previous article from the Readers Corner to summarize it. Here is a quote from İsmail Selim Eşsiz's "Attack on journalism," published on Aug. 3, 2015:

"On July 24, a major media group was targeted by a terrorist attack. A timed bomb was placed in the gardens of the Star newspaper and 24 TV, and without the intervention of security forces that conducted a controlled explosion, today we might be mourning the deaths of dozens of our colleagues in the wake of the biggest terror attack in the history of Turkey to target journalists."

Daily Sabah had its share as well when its parent group Turkuvaz Media Group's headquarters in Istanbul was attacked on Sept. 7, 2015. Turkvuaz Media experienced another attack on its İzmir regional headquarters nearly a month later.

While the focus of attacks shifted from individuals to media groups, individual journalists are still very much in the crosshairs. Star Media Group Chairman Murat Sancak was attacked by a gunman on Aug. 20, 2015. Attackers opened fire on Sancak's car and fled the scene. Sancak survived the attack unscathed. Ahmet Hakan, a columnist for the Hürriyet daily was attacked by four people last October. Similarly, reporters and cameramen also came under attack repeatedly last year. Here is another quote from Eşsiz:

"This was not the only attack on journalists in the past two weeks though. Two reporters were attacked after the horrible suicide bombing in July 20 that took place in Suruç. A Haber reporter, Sercan Bilgi, and cameraman Orhan Şener were in the area to follow the aftermath as well as provide the public with coverage of current events in Suruç, but they were attacked by a group of four people. Their work was disrupted, and they were not able to broadcast, as they were threatened with being thrown off the roof if they did not comply. This was a blatant violation of the public's right to know, and considering how reporters from a single media organization were singled out, it was another result of provoking people against journalists."

With attacks becoming more frequent, they also escalate in terms of methods. Timed bombs, Molotov cocktails and shotguns are now employed in attacks on journalism. Criticism of a media organization cannot warrant this type of response, and terror remains the main culprit in many of these incidents. Security forces should take the necessary steps to stop similar plans from becoming reality or else the next time we might be mourning the loss of human lives.

Media, too, should present a unified front when it comes to these attacks, be it national or international. We must condemn the attackers regardless of our stance, past feuds or disagreements. We must work to eliminate the mentality of attacking media as a statement by employing the mentality of peace in journalism. Here is the statement from the Media Association in the wake of the attacks on Yeni Şafak and Yeni Akit:

"These attacks, which aim to remove freedoms of expression and thought and to hinder journalists from performing their professions by terrorizing them, will not reach their target today as was the case in the past. As the Media Association, we offer our get-well wishes to the Yeni Şafak and Yeni Akit dailies.

We expect the security forces to shed light on the incidents, bring the assailants to justice and take the necessary measures to ensure that these kinds of attacks do not take place again. We invite our citizens, press associations, journalists, politicians and nongovernmental organization representatives to be in full solidarity with the attacked newspapers."

Media actions alone are not sufficient to stop these attacks though. Politicians need to act responsibly when it comes to terror attacks and act as an extinguisher, not light the fire or fan the flames. Provoking the public against the media will result in similar attacks in the future as it did before. Peoples' Democratic Party (HDP) Co-Chair Selahattin Demirtaş waved the Sabah, Yeni Şafak, Takvim, Star, Akşam and Güneş newspapers at supporters, deeming the dailies rags and throwing them on the ground in June 2015.

Painting a target on the media's back will not help anything but will escalate the violence, as it legitimizes the attacks as a form of criticism. Let us hope that this little simulation of the 1990s is at its end, and this will be the last article of its kind in 2016.
Last Update: Feb 15, 2016 1:25 am
RELATED TOPICS