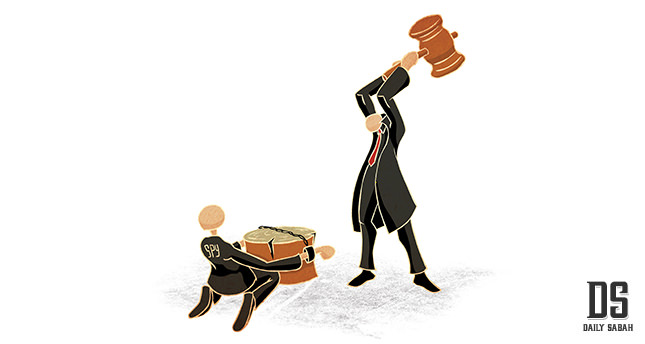 Journalists Can Dündar and Erdem Gül were released pending trial with the Constitutional Court's latest verdict. It seems that the top court has once again used law to advance its agenda, just as it did many times before

This past week, the Constitutional Court ruled that there had been a violation of rights in the arrest of Cumhuriyet daily Editor-in-Chief Can Dündar and Erdem Gül, the paper's Ankara bureau chief. This decision was met with enthusiasm by many journalism organizations as well as international media. Those who celebrated the news said the Constitutional Court is the protector of democracy and supported the decision. But does this assessment represent the truth? Before deciding that, we have to answer several questions. First of all let us summarize the events shortly:

Two journalists, Dündar and Gül, were charged with "providing documents regarding the security of the state, political and military espionage, releasing secret documents and propaganda for a terror organization." Both of them were then arrested on charges of espionage and supporting terror. The event concerns stories and photographs of National Intelligence Organization (MİT) trucks.

An important point has to be emphasized here. There were no arrests made or charges brought up against journalists who reported on the same event prior to Cumhuriyet's piece. When the MİT trucks were stopped in Adana on Jan. 19, 2014, many news agencies covered it as breaking news. It is their natural right as they saw the event newsworthy and reported it to their readers. But a day later, on Jan. 20, a court ruled that this was a matter of national security and imposed a gag order. Whether or not this event actually warranted a media blackout is up for debate, but during those days another important event took place. Between Jan. 20, 2014, and May 29, 2015, the date Cumhuriyet published the article, it was clear that the whole event was orchestrated by an illegal organization nested inside state agencies to put pressure on the government. Dündar and Gül disregarded these facts along with the gag order and published the news once again. Also, the news itself contained many factual errors.

It is quite clear that the article Cumhuriyet published was a disaster in terms of journalism. Dündar and Gül published information and visuals given to them by undisclosed people, without any fact checking or any other investigation while not shying away from twisting it. This was news that was published and proven to be a lie before. Publishing it again cannot be explained away as a journalism reflex or newsworthiness. On top of all that there was also a gag order.

Those who regard the arrest of Dündar and Gül as pressure on the freedom of media also have a hard time explaining the reason for publishing an article once again after one-and-a-half years, while there was a gag order. There is no other explanation than the offenses these two journalists were charged with during their trial. If the journalists who reported on the MİT trucks right after the event took place faced these charges, then we would have a serious press freedom issue on our hands. But this report, published one-and-a-half years after the event despite the ban, is not related to press freedom. This can be regarded as a press freedom issue as much as we regard closing DAESH's media organizations.

Another point critics agree on was that these two journalists should be released by the court pending trial. Regardless of Dündar and Gül's cases, the issue surrounding them being jailed or released pending trial has had many arguments in Turkey for a long time. But if we were to look at the current laws, being jailed is not an extraordinary situation in this case. Considering the charges and possible minimum and maximum prison terms they entail, it can be considered proportional. After all, this is not a simple defamation case, but charges related to national security.

If we are to take a closer look at Constitutional Court decisions from the past, we see that it has acted as the protector of the status quo rather than of democracy and freedoms. The Constitutional Court has closed 21 political parties since its foundation. In 2008 it came within a hair's breadth of closing the Justice and Development Party (AK Party) and stripped it of its financial aid from the Treasury with only one member voting against. Many of the Constitutional Court's decisions can only be regarded as political because from a juridical perspective, they were fiascos.

I believe we are faced with a case of "ultra vires," a picture all too familiar. Despite the serious amount of evidence and importance of the charges, the Constitutional Court put all other cases on its docket aside and ruled on this one. Therefore, just like the 367 deputies and headscarf decisions of the Constitutional Court, this too, is another case of using law to influence a critical process.
Last Update: Mar 07, 2016 1:13 am
RELATED TOPICS