Turkish media and its big words 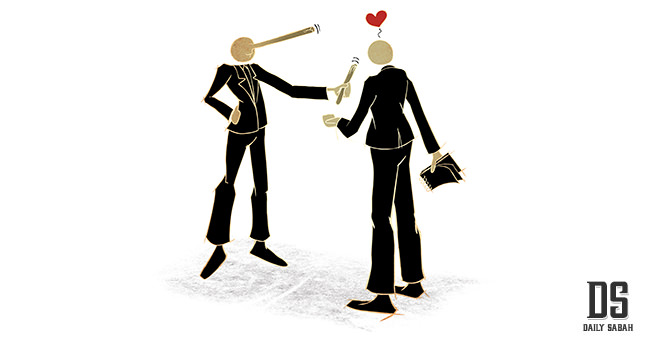 The Turkish media has the tendency to insist on using terms with new meanings to support their own motives, but as long as these do not gain acceptance in the society, their repetition proves little other than revealing users' limited perspective

This relationship gets more visible when we look at the concepts. After all, media has great potential for instilling new meanings to already-known concepts or make them well-known by repeatedly bringing it to the public eye. This has been one of the biggest habits of the Turkish media. Some concepts catch on and we see them used immensely whether they are related to the subject or not.

Off the top of my head I can give two examples of this. The first is "peer pressure" and the second is "becoming authoritarian." Both of these are relatively new in finding popularity as they have been in the system for 10 years or so. And they are most heavily used for criticizing governments.

Another example of these fashionable new terms is "polarization." If you are to read a newspaper from Turkey, it is be a safe bet to say that you would be reading a sentence such as "Turkey has never been this polarized," "We are shaken, divided in camps and polarized. This will end in disaster," and so forth. The biggest customers for these doomsayer sentences are unfortunately foreign journalists and diplomats who are rather unfamiliar with Turkey. They immediately adopt these views as their own and hastily clutch a pen to write on the subject like an amateur sociologist. Of course, their articles do not rely on facts as one might expect, but rather tales from their acquaintances and connections, almost all of them with anti-government views.

Everyone already knows that the social norms and concepts are not born with their names and exist in a society long before they are recognized and named. The same goes for polarization. Turkish media might have discovered this term after the government's reaction to the 2013 Gezi Park protests, but polarization is as old as the history of the Republic of the Turkey.

Turkish media might use the term polarization only in its political sense, but that is far from complete. If we are to talk about polarization, we first have to include economic and cultural polarization. The injustice of income distribution has been one of the biggest problems this country has had ever since its foundation. In its adolescence, Turkey produced a rich few and poor masses. The wealthy few always had an elitist attitude. A similar rift was also present in the cultural sense. The wealthy few always kept the tools of political power close at hand and tried to adopt and spread the culture of Westernization. They ignored a wide variety of cultural perspectives they encountered and on top of ignoring it they also belittled, alienated and attempted to ban it. Another reason for the Justice and Development Party's (AK Party) success in elections was the annoyance of the masses of the policies and belittlement from these minority elites. If we are to talk about polarization in society, we must avoid the facile attitude of simply blaming the ruling party. While this would certainly be easy it would not go a long way into grasping the truth of the matter.

Another problem with the concept of polarization is that those who use it usually forget its objective meaning in order to instill pejorative meanings. In these usages polarization is usually portrayed as synonymous with schism, anger, hate and bigotry. While it is most certainly true that polarization can have these types of dangerous causes and effects, polarization cannot be seen only with this perspective.

Turkish media and international media have been talking about a huge polarization problem in Turkey for the last two years. It has been used so insistently that it started to gain traction. But its repetition did not put forth an actual context and failed to convince the public, which did not find it realistic or sincere.

Many people still think that the media invents and uses these terms to manipulate politics and so take them with a grain of salt. As a result, these terms led to the expansion of the gap between society and media.

Another important problem is that those members of the media who complain about polarization all the time have in fact polarized themselves. Even while writing this criticism of polarization, they use polarizing language. There are hundreds of examples of this in Turkish media. Their common aspect is that while they seem to talk about the problem, they alienate the part of society that does not share their views. Unfortunately, these articles' criticism and insults usually go hand in hand.

It is clear that we cannot defend ethical principles by abandoning them completely. Because of this contradiction, the word polarization only serves as a tracer bullet for its users. But the target of this bullet holds no enemies. In another words, it misses its target, by a long shot.