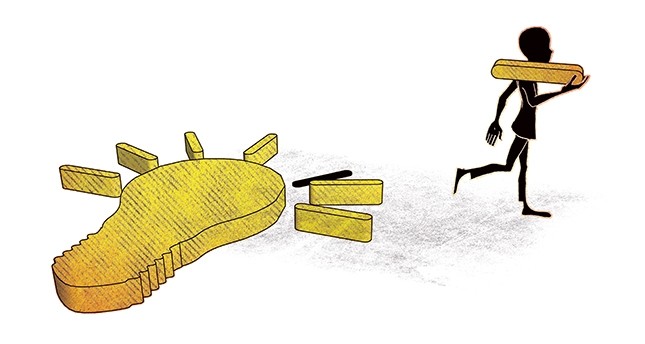 Illustration by Necmettin Asma - twitter.com/necmettinasma
by İbrahim Altay Jun 20, 2016 12:00 am

Following an accusation of plagiarism raised with one of our editors, we reviewed the case in order to determine whether plagiarism took place or not

Theft of thought labor has been one of the biggest problems and starting point of many heated debates since time immemorial, as we can see its first examples as early as the first century. Even though the term "plagiarism" is more commonly encountered in academia, journalism is no stranger to it as the sector continues to be one of the biggest in the thought labor category. As a universal issue, plagiarism troubled journalists as the sector moved to the internet as its most popular base of operation. There are many opportunities for plagiarism as the sources in reach are endless. However, there is a silver lining to this newfound increase, and it is also related to accessibility. As all content on news websites became indexed in search engines, plagiarized works can be discovered with a quick search.

The increased ability to spot potential plagiarism also brought a need for more or less precise, or at least clear, answers to what can be considered plagiarism. We wrote two articles on the issue in Reader's Corner. The first one was published on June 8, 2014, with the headline "Journalists and plagiarism." That article's main purpose laid the groundwork for the issue of plagiarism in journalism along with answering the question above. The second article was more of a reactionary piece since we used the first article's groundwork in order to study an actual situation concerning Daily Sabah. It was published on July 14 with the title "Inspiration and plagiarism." And it seems that now we have our third article on the subject.

"@GulsahDark Your article (link of the Daily Sabah article) is plagiarized from Nat Geo blog.

"@GulsahDark You should publish an apology and retraction in Sabah. You can't just copy another journalist's work and call it your own."

"@GulsahDark Just because you put my words in quotes doesn't give you rights to use my work. You didn't do any original reporting. None."

These are very serious accusations, and our ombudsman office was made aware of this thanks to the email Dark sent to us. For full disclosure, here is the related part of her email:

"Jodi Hilton, the photojournalist I quoted in the article 'Deq: A dying art among Turkey's Kurdish women,' raised accusations of plagiarism on Twitter. The section I quoted was from National Geographic's blog platform and it contained the remarks of Ms. Hilton. I used them with quotation marks, her name, name of the publication and date of the publication. All were present in the Daily Sabah article.

When writing a news article, I try to adhere to the rules about plagiarism in academia and would like to have your assessment on the situation."

First of all, I would like to thank our editor for bringing this matter to our attention in due haste. The original article was published on the National Geographic blog with the title "The Last Tattooed Women of Kobane," on Jan. 21, 2015. The author of the article is Coburn Dukehart. In the article, Dukehart interviews Hilton on "deq" tattoos and Hilton shares her observations and thoughts.

Following our editor's initial email, we asked her several questions as we launched our investigation. Here are the questions and her answers:

Q: "How did you decide to write this article?"

A: "I try to choose local subjects that will catch the interest of our foreign readers for our Feature page and I had prior general knowledge about this one. The main reason for that was the fact that I come from a Kurdish family and some of our family elders are still carrying on the tattoo tradition. I decided that the subject was interesting for our readers and prepared the article."

Q: "What are the sources you used while preparing the article? Is the information in the article based on sources other than the interview with Jodi Hilton?

"In order to add to the knowledge I already had on the subject such as the reason behind the tattoos, locale of the tradition and the meanings of some of the symbols, I also conducted research. Apart from the interview with Jodi Hilton which I referred to, I also reviewed the process of tattooing the "deq" in photo galleries from Turkish news websites in order to be able to convey it fully. The reason a referred to Hilton was to support the article with tangible observation."

Q: "What are the sources of the photographs you used in the article? Did you give credit to their owners?"

"I think the website doesn't have the signatures of the photos, but I added them when I prepared the printed version. The photos I used mostly belonged to Doğan News Agency (DHA), but one of them didn't have a copyright."

After reviewing these answers and both articles we can safely say that our editor, Gülşah Dark, did not commit plagiarism. Her answers were satisfactory and therefore there is no need for an apology, correction or retraction in this case. As we said at the beginning of the article, plagiarism needs to be defined as clearly as possible. Back when we wrote our first article on plagiarism, we quoted two definitions of it from two different universities. Allow me to quote them again to provide the necessary background.

Stanford University defines plagiarism as the "use, without giving reasonable and appropriate credit to or acknowledging the author or source, of another person's original work, whether such work is made up of code, formulas, ideas, language, research, strategies, writing or other form."

So when we look at these two definitions, what we have here is clearly not plagiarism. Dark did not fail to give credit to the original source. She used quotation marks accordingly. She did not build her entire article on the said source by paraphrasing it, but rather diversified her sources. If we were to take out the part based on Ms. Hilton's remarks, the article still possesses a cohesive and complete structure. The rest of the information shared in the article can be considered in the realm of common knowledge and so it does not require identifying a source. Previously we said that if more than 40 percent of an article consists of opinions other than those of the writer of the article, the article would be considered faulty. It seems that this was not the case with Dark's article. All in all, what we have here is not plagiarism. If the use of the said interview is the issue here, that falls under the purview of copyright and it is an entirely different subject.

How should we deal with plagiarism?

Even though the case at hand wasn't plagiarism, it would be beneficial to remind our suggestions on the issue to the editorial board:

- "Because of the increase in terms of digital publishing and the "copy paste" method, plagiarism became easy to commit but as with every sword this cuts both ways. This also made it easy to determine whether plagiarism is committed or not. Therefore, editors should research every text online, and if they suspect plagiarism, they should refrain from publishing it."

- "In the copy edit process, quotes, quotation marks and summaries should be double checked whether they are used accordingly or not. If it is necessary, copy editors should work with writers on this matter."

- "If there is an accusation of plagiarism about a published article, these accusations should be taken into consideration by the editorial board as swiftly as possible and concluding the matter should be a priority. To determine if there is indeed plagiarism or not, methods and rules set by respectable universities should be used."

What can be considered plagiarism?

- "Turning in someone else's work as your own."

- "Copying words or ideas from someone else without giving credit."

- "Failing to put a quotation in quotation marks."

- "Giving incorrect or inadequate information about the source of a quotation."