Media and public stand together 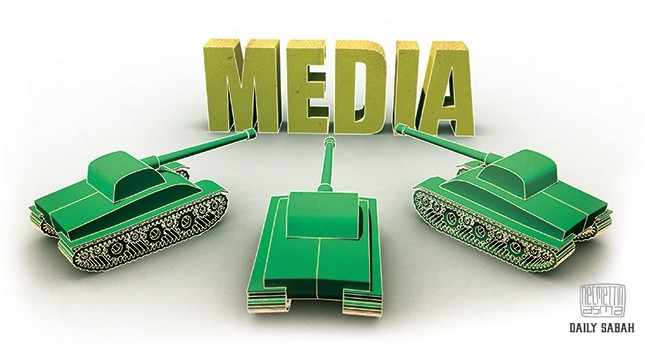 Illustration by Necmettin Asma - twitter.com/necmettinasma
by İbrahim Altay Jul 18, 2016 12:00 am

As the coup attempt failed, people stood shoulder to shoulder with their newspapers and TV channels, thwarting the coup soldiers from controlling the media

The media has always been one of the primary targets when the military attempts a coup in Turkey. Back in May 27, 1960, a junta seized the National Radio building and declared to the public over the radio that they had taken over the control of the country. These announcements were repeated over and over with brief intermissions of heroic songs that since then have become one of the symbols of military coups. During the announcements, one of the things said repeatedly was: "The Turkish nation has assumed control of the country."

As time passed and communication technologies evolved. In the 1980 coup, radio was replaced with television. The entire nation awoke in the morning to find out that they once again were going to suffer a military coup as Kenan Evren, the chief of General Staff at that time, read the junta's manifesto. Of course Turkey has experienced failed coup attempts as well but the fate of the media was still similar. In 1971, commander of the Cadet Schools, Colonel Talat Aydemir attempted a coup and forces under his control tried to seize and control the Radio Building, but in the end failed to achieve their goals. Talat Aydemir and his co-conspirators were executed afterward.

Prior to Friday night's attempt, Turkey had undergone its last military coup on Feb. 28, 1997. Commanded by the military, a post-modern coup dismissed the chosen representatives of the public with the help of the media supporting the endeavor. After the Justice and Development Party (AK Party) was elected in 2002, the military's effect on politics lessened considerably and with judicial efforts Turkey has faced up to its previous coups. Evren, the leader of the 1980 coup who also appointed as president afterward, was tried and found guilty. With all of his ranks taken back, he died shortly after.

The night of July 15, 2016 Turkey faced the threat of a military coup once more at around 10 p.m. With a military coup in mind, the faction of the military decided to follow the example of prior coups and make the media one of their primary targets. Coup soldiers loyal to the rebel military faction first invaded the Turkish Radio and Television Corporation (TRT), the national broadcaster. They forced the TRT presenter at gunpoint to read out a manifesto prepared beforehand. This move by the junta only worked for a short time because despite previous bad memories, Prime Minister Binali Yıldırım appeared on other channels saying the junta had failed to seize the country and declared the coup an uprising. TRT executives also stood with democracy and their channels. TRT Deputy Director-General İbrahim Eren sent a tweet from his personal Twitter account:

"The manifesto broadcasted from TRT is a pirate-broadcast, forced at gunpoint. TRT is loyal to democracy. The pirate broadcast is now terminated. We call on any members of our nation who are still loyal to their country and defenders of democracy to take back their channel at TRT headquarters."

Shortly after, these calls for help bore fruit and Turkish people filled the streets in front of TRT donned with Turkish flags. Unarmed civilians managed to unarm armed soldiers and returned the channel to its rightful owners. The channel itself returned to its normal broadcasting schedule two hours later. This was the first fiasco for the terrorist junta.

After they lost control of TRT, they then set their sights on CNN Türk. They landed a military helicopter in the courtyard of Doğan Media Group and tried to stop CNN Türk from live broadcasting. They raided the studios and ushered everyone outside. Our colleagues at CNN Türk managed to ensure one camera kept rolling and continued to broadcast the empty studio after being taken out of the building. The public once again answered the call and managed to neutralize soldiers inside to take back the channel after only one hour.

Realizing they could not seize every channel one by one, they went for satellite broadcasting companies. They attacked Digitürk, a platform that allows every channel to reach their viewers. They managed to cut all Digitürk broadcasting for two hours, but were forced to surrender after a successful operation.

Another platform that was attacked was Turkcell, one of the three major cell companies in Turkey. Despite all their efforts, they failed to cut cellphone communication. None of the companies mentioned above supported the coup. The failure to seize the media and cut communication channels was one of the biggest reasons this coup attempt failed.

The same night, this rabid junta tried to invade the Turkuaz Media Group building, which also houses our newspaper, Daily Sabah. But they failed to consider a factor in their equation: After the attacks on TRT and other media organizations, the public was well aware of the situation and potential targets. Many from the public and our readers had already surrounded our building to protect it. Our readers stood firm against these bullies.

They stood with and in front of the police and shouted at the soldiers: "You cannot pass without running us down!" They gave them a good whacking and drove them back. While running away, some of them opened fire wildly and some bullets hit our building.

Some of our colleagues were still in the building at that time and they also went out to stand with our nation and joined this blessed struggle. People said to them: "We won't give you to this junta. We will die if necessary, but we will not hand over a single one of you." This is enough to show the critical significance of our job. It shows the place our newspapers have in their hearts even though they criticize us or become angry with us from time to time.

Newspapers belong to the nation. And our nation showed that they will not hand over their newspapers to marauders, traitors, murderers and enemies of the society, thus writing a saga of democracy. I hope all our colleagues get well soon after this long night.