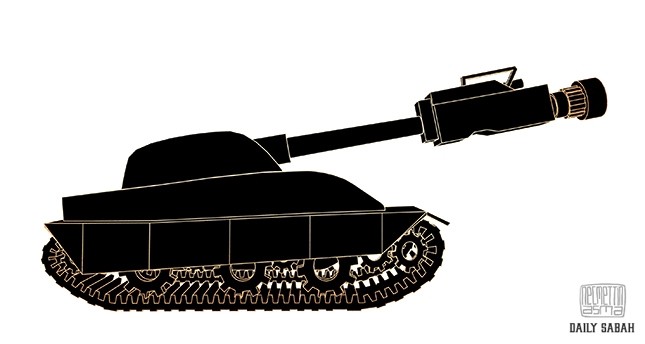 Illustration by Necmettin Asma - twitter.com/necmettinasma
by İbrahim Altay Aug 08, 2016 12:00 am

The media is often used as a way to bridge the gap between those in power and those who empower them; namely, governmental institutions, non-governmental organizations (NGOs) and so forth, backed by support from the general public. On the contrary, however, that bridge is a two-way street. While the primary purpose of the media is to provide information, it can also be used as an outlet for people to express their own goals or desires. The media can and should be a gauge that takes the pulse of the public agenda while also serving as a means to conduct surveys or delegate public opinion surveys to companies and providing news coverage of the process and results. This is what Daily Sabah did following the turmoil of the July 15 coup attempt. Amid rising allegations that the U.S. is providing a safe haven for Fethullah Gülen, 64.4 percent of those surveyed by the company Andy-Ar believe that the former preacher was the mastermind behind the recent putsch attempt in Turkey.

Daily Sabah took to Twitter to gauge public opinion by conducting a poll. @DailySabah tweeted the question, "Do you agree with allegations that the U.S. directly or indirectly supported the failed Gülenist coup attempt in Turkey?"

The two answer choices were "Yes, I do" and "No, I don't." The poll was posted on Twitter on July 19 and received over 500 retweets. In short, 79 percent of participants indicated that they do suspect U.S. involvement in the failed Gülenist coup attempt, while the remaining 21 percent believe otherwise. The total number of survey participants reached more than 8,000. We will get to the implications of these results in a bit but first, let's take a look at the response the poll itself garnered from various media outlets.

The initial reaction to our poll was a negative one, with some calling the question presumptuous and an inaccurate reflection of the reality among the Turkish populace. Others raised accusations that the poll was not an act of journalism but more of an attempt to project specific propaganda messages and manipulate Turkish-U.S. relations. Let us address these criticisms before going into the implications. First of all, an important distinction must be made regarding the poll that some may have missed. The poll does not in any way implicate U.S. involvement in the coup attempt nor does it indirectly denounce one side or the other. It is simply gauging public opinion on the subject. With that being made clear, it is also imprudent to call the survey question presumptuous, as the results of the poll clearly show that many felt this was a subject that needed to be broached. Lastly, while the result of the poll certainly is not beyond reproach compared with its counterparts, the numbers were backed up by the results of other surveys taken shortly after Daily Sabah's poll on Twitter. A survey conducted by the Turkish polling company MAK Consultancy released results indicating that 70 percent of those surveyed believe that the U.S. was involved in the coup attempt. A total of 5,400 people participated in this face-to-face poll. As we clarified, neither the question nor the results were far-fetched as initially believed. It is time to take a look at the second aspect of this criticism: Is this beyond the ethics of journalism? The answer is quite clear. As previously explained, the media and extension newspapers are allowed; if not required, to gauge public opinion in order to act in accordance to the public interest. Taking to Twitter, where newspapers can reach thousands of people in a short amount of time is perfectly acceptable. It is quite surprising, however, to find stalwart defenders of social media and freedom of the press have seemingly forgotten their previous stance upon discovering that the end result countered their interests. I congratulate my colleagues for undertaking this task. Another @Daily Sabah poll that is worth mentioning drew similar ire. . After the first poll, a second poll was tweeted, asking our followers: "Which institution of the U.S. provided the biggest support to the Gülenist terrorist organization?" The final results were 60 percent in favor of the Central Intelligence Agency (CIA) and 20 percent implicating the White House. The remaining 11 percent was more or less evenly shared by the Department of State and the FBI, with 6 and 5 percent of participants, respectively. More than 3,000 people in total responded to this question.

When all is said and done, we have to look at the implications these poll results have. When the dust from the coup attempt began to settle, Western media outlets grew convinced that anti-American sentiments in Turkey are seemingly nearing an all-time high. However, in order to keep their footing on the ethical higher ground, Western media also attempts to turn Turkey's growing negative sentiment into an issue of democracy, accusing Turks of not supporting freedom and democracy when, in actuality, Turkey simply does not like the actions of the U.S. The vast majority of the Turkish populace is convinced that Fethullah Gülen is the one behind the failed coup attempt; 64.4 percent according to Andy Ar surveying company and 88.1 percent according to A&G Research company. Considering those numbers along with the fact that Gülen lives in self-imposed exile in rural Pennsylvania in the U.S. where his buddies refuse to extradite him, U.S. involvement in the coup, whether direct or indirect, is indisputable.The words "our boys did it" uttered by CIA station chief Paul Henze in the wake of the 1980 coup is still fresh in the minds of the public and, therefore, it should come as no surprise that Turkey's relations with the U.S. are growing strained. It seems that Western media outlets not only fail to understand but also perpetuate dissonance with their condescending arguments, likening Turkish people to tinfoil-hat conspiracy theorists and accusing them of having disdain for democracy and freedom for taking to the streets and risking their lives to defend the democratically elected government of the Republic of Turkey on the night of July 15.

The international media should realize that veiled threats accompanied by condescending arguments are no way to fix the gap that continues to widen due to irresponsible reporting on terrorism in Turkey, overall failure to accurately cover the coup attempt in Turkey and the dash of manipulation sprinkled on the media content in the heat of the moment while drawing the wrong conclusions about what happened on July 15 and implicating the very people who lost their lives to stop the putschist attempt.

For the past two weeks we have continued to highlight the level of incompetence in the international media when it comes to coverage of the July 15 coup attempt as well as its aftermath. While Turkish media continue to gauge the public reaction to the event, international media outlets have made their own inquiries in attempts to draw conclusions that have led them to falling into the trap of parachute journalism. With little background information, lack of knowledge about the cultural impacts of previous coup attempts in Turkey and knowledge that does not extend beyond the parameters of Wikipedia, Western media outlets seem determined to brand this coup attempt as a small inconvenience, a little glitch in the program of Western superpowers, rather than a social trauma.

Even if all the opinions, columns and editorial pieces that rely heavily on commentary are disregarded, we can still see factual errors being made by media outlets regarding the coup attempt and its aftermath. While we can excuse any false reporting that was done in the heat of the moment on the night of July 15, the blatant attempts to manipulate public opinion are mistakes that media outlets continue to make nearly one month after the coup attempt.

Therefore, the think-tank extension of our newspaper, the Daily Sabah Centre for Policy Studies, undertook the task of publishing a special report on the July 15 failed coup attempt that tries to put it in perspective along with providing key facts about what happened. The report is a chronological breakdown of the failed coup and includes eyewitness accounts, national and international reactions and potential culprits while attempting to shed light on the structure of the Gülenist Terror Organization (FETÖ) and several other subjects.

The report titled, "July 15: Gülenist Coup Attempt" was recently published and is currently available for viewing and download on Daily Sabah's website at a link in the news article titled, "Turkey coup attempt of Gülenists explained in special report." We will also provide the link at the end of this article for your convenience.

We would like to thank our colleagues who undertook this crucial task and delivered in spades. We also hope that with the availability of the clear chronology, information about the culprits and aftermath, this special report will help our international colleagues to avoid factual errors when covering this extraordinary event which, no doubt, will shape Turkey's immediate future.