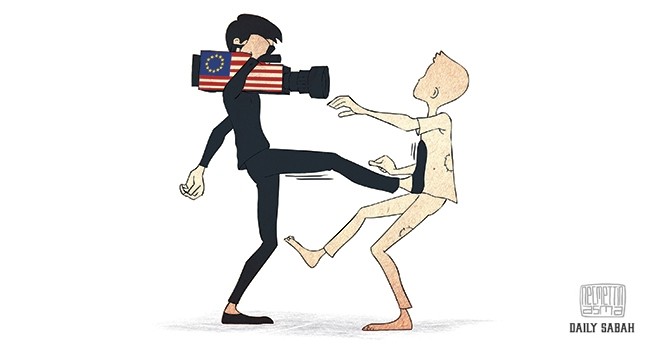 As Western media starts to treat Turkey like it does the Middle East, it is important to realize that the current modus operandi will only add further strain relations between the Turkish people and international media

Throughout this year, media coverage in the West has left much to be desired. While this may come as a surprise to some, it is actually a reminder of a long-standing approach to covering the Middle East, and it seems that the West decided to add Turkey to the list of countries that deserve second-class journalism.Although the usage of the term Middle East replaced Eurocentric usages like Near East and Far East, the attitude toward these regions has not altogether changed apart from their branding. It is especially evident that the main problem with coverage of the Middle East is that it suffers from desensitization, and has been for a long time. As the western-most point of the Middle East, Turkey has been receiving its share of this erroneous view with the coverage of recent terror attacks, political pieces and finally the failed July 15 coup attempt.This subconscious desensitization has been leading to a mentality around the world that numerous human horrors are considered as another day in the Middle East. Just recently on a satire show on HBO, the host John Oliver made a remark about Turkey, saying that the country is a diet-Syria while nearly 200 civilians, police officers were killed. This passing remark not only belittles the situation in Turkey, but also the ongoing civil war in Syria, which is the biggest humanitarian crisis of the 21st century. Oliver is just one of the latest examples and hosts a satire show, but usually the political correctness that applies to Western issues suddenly becomes lost when it comes to the plight of others.

If we are to look at the main elements at the core of this problem, three issues of journalistic failure present themselves. The first is also the most threatening: Deliberate manipulation. This means that either individuals or editorial boards attempt to desensitize their audiences with a political goal in mind stemming from either ideological ignorance or an actual attempt to influence modern day politics. While exposing these unethical journalistic practices, reporters try to inform the public and add a footnote to history, as there is little else to do as a journalist. As the Commie Red replaced by the Islamic green, Islamophobia replaced the red scare, thus allowing manipulations cooked in news rooms will continue to be on show.

The second problem stems from inaccurate and sub-par reporting, which is made worse by disregarding journalistic principles due to geographical location. This problem seems to be twofold, as we see newspapers from abroad choosing one view as the prominent one in Turkey depending on their whims while disregarding others. Even though outlandish claims that have repeatedly been refuted, denied and disproven on numerous occasions, our international colleagues seem to be going for sensationalism and shying away from corrections.

The second part of the problem is directly related to desensitization. This year, Turkey has been the target of numerous terrorist attacks, including the June 28 Atatürk airport attack. Even if we disregard the inaccurate reporting and mistaken visuals by allocating it to the heat of the moment, the usage of photographs tells the tale. Without adhering to the most basic photo usage principles, most Western media printed pictures of the bodies of the victims. Considering the censorship of the photos from the March 22 Brussels Airport attack, the double standard was clear. The same goes for the July 14 Nice attack. Of course it is important to mention that even though this double standard and preferential reporting is relatively new to readers from Turkey, it has been going on for quite some time when covering the Middle East.

The last problem we need to look at is parachute journalism. Foreign journalism in Turkey has never been up to snuff, as even the experts and correspondents on the ground continue to misinterpret the issues. Although we covered the issue in İbrahim Altay's "Parachute journalism in Turkey" article published on March 17, 2014, a quick summary might serve some good as we see that the situation remains unchanged two years later. As foreign journalists still struggle with the language and cultural barriers and fail to ascertain the truth in the polarized nature of the country, they continue to report what their close acquaintances think on daily issues even if all of them belong to a single social strata. As for the experts who give their opinions on the issues, reporting on the coup attempt provided many examples. Two of them were from FOX News collaborators – Ralph Peters said: "People staging the coup are on our side," and Sebastian Gorka said: "Good guys lost," as the coup attempt was extinguished.

All of these problems continue to create an environment in the Middle East where terrorist organizations like DAESH gain a breeding ground because of the initial lack of any international outcry. It also serves to fan the flames of Islamophobia and xenophobia. As inaccuracies strain international relations between the Turkish public and Western countries, we see Westerners becoming desensitized to Turkey's pains while Turkish people grow resentful toward the international media.

On July 31 a live ticker at Vienna Airport quoted a local newspaper saying, "Traveling to Turkey means you are supporting [President Recep Tayyip] Erdoğan." Even if we do not get into the problems by means of principle with the statement, considering that these words came just days after the coup attempt in Turkey leaves many of us raising our eyebrows. While we could not give much coverage of this in the Reader's Corner as it happened, a detailed story is available on the Daily Sabah website titled, "Austrian airport propagates 'travelling to Turkey will only support Erdoğan.'"

The quote in the ticker was met with heavy criticism on social media and was later removed as Turkish Ambassador to Austria Mehmet Hasan Göğüş took the necessary steps upon an order from Foreign Affairs Minister Mevlüt Çavuşoğlu.

However, it seems that despite the backlash after the initial blunder, yesterday there was another attempt to tarnish Turkey. In the very same spot where the visitors at Vienna Airport saw a live ticker displaying a provocative statement claiming that "Turkey allows sexual intercourse with children under the age of 15." As the media organization or individuals behind the slander upped the ante after July 31, we are left with a blatant case of manipulative media action. While there have been political actions taken in Austria that are blatantly anti-Turkey, including the infamous banning of the Turkish flag by a mayor, the media also seems to be hopping on this politically incorrect bandwagon. Detailed coverage of the second blunder can be found in the news article titled, "Vienna airport removes anti-Turkey statement after foreign ministry takes action," which was published yesterday.

These two cases also showcase the level of ease with which the media is used to manipulate public perception through slanderous comments and misinformation. Despite both displays of misinformation being retracted and quickly removed, thanks to the actions of the Turkish Embassy and Foreign Ministry, more subtle attempts are still being featured daily in the international media with increasing intensity in the wake of the coup attempt on July 15.

We hope that we will not see a third case of these not-so-innocent blunders, as this ever-increasing trend lends itself to a post-apocalyptic scenario.

Military junta: Group of modernists or a cult?

Ever since the coup attempt, we have been trying to feature different examples of the mistakes and misinterpretations about Turkey in the international media. This week, an article by Norman Stone was caught in our net. The Times published an article titled, "Modernity's first mistake was to take on religion in the July heat" on July 17 on its website. The author of the article, Norman Stone, has also featured in Reader's Corner for a mistake regarding Turkey before. Our readers may remember the article titled, "Curious case of Norman Stone" that was published back on Dec. 14, 2015. Back then, Mr. Stone had made a basic yet crucial Turkish-language error and nearly based his entire article on that erroneous claim. The article in question was published in the Guardian.

If we fast-forward to today, Norman Stone's article this time seems to not only be misinformed but also a textbook example of Islamophobia.

The title itself not only tries to paint the putschists who attempted the coup as saviors but is also grossly mistaken in its assumption. Considering that a vast majority of "modernists" in the army didn't participate in the coup attempt, which was perpetrated by members of the Gülenist Terror Group (FETÖ), I believe it can hardly be considered modernist when a cult is behind it, even if Mr. Stone claims otherwise.

Moving on to the article itself, the first paragraph dives headfirst into Islamophobia with the phrase, "However, army colonels, seeing themselves as guardians of the nation, grousing in the mess at the growth of a religious-minded obscurantism that pushes their daughters into silly shapeless clothes and stops them from having a beer, must somehow have been prodded into the stupidity of a mistimed coup."

Of course let us not forget the friendly advice from Mr. Stone: "Any professor of history would have told them: coups don't work in July, when everyone is soporific with the heat. Do it in September."

He also said that "Ataturk … changed the alphabet [Arabic script, with three vowels which does not fit Turkish, which has eight]…" Considering Mr. Stone also suggested everyday Turkish usage of the word "you" – or "sen" in Turkish – as an insult and thought it was used mainly for dogs in the article we previously mentioned, I would recommend taking this with a grain of salt.

Even without numerous examples we simply didn't have space for, the article seems to be expanding the relative limits of opinion pieces with supportive remarks on both the previous coups as well as the recent putschists. But I would like to add a final nail in the coffin, if you pardon the expression.

The photo used in the article depicts the soldiers who were detained following the recent coup attempt. The explanatory note was "Soldiers who took part in the failed coup are held under guard. Hundreds of people were killed." One would think that making it clear that those hundreds who were killed were the civilians (victims of putschists) and not the soldiers themselves, would be prudent and not manipulative but I guess not.