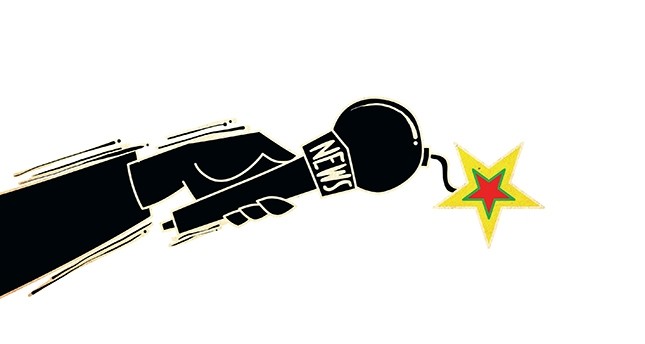 Illustration by Necmettin Asma - twitter.com/necmettinasma
by İbrahim Altay Oct 10, 2016 12:00 am

Following months of propaganda and petitions surrounding the disappearance of Hurşit Külter, local and international media that voiced pro-PKK views and framed the state once again started to accept that they were duped with a staged play as the facts start to be revealed one by one

Although it is an oft-mentioned name in local and international media, let us give a brief introduction to Hurşit Külter for our readers. He was known for being the Şırnak provincial leader of the Democratic Regions Party (DBP). This was mentioned in almost every news article on the subject. The only part missing was that no one warned about the misdirection of the word "democratic" in the party name. The DBP operates as a branch of the Kurdistan Workers' Party (PKK). Despite attempts to polish himself, Külter is not a freedom fighter or a democracy warrior. He was one of the coordinators in the trenches in the Şırnak region. Trenches that forced Kurdish people to live in isolation so that the PKK could fulfill invade the region. During this attempted invasion, many Kurdish citizens were threatened, forced to migrate and killed in the crossfire or at the hands of the PKK.

The latest story surrounding Külter began on May 27 when he disappeared. Conspiracy theories ran rampant, claiming that Külter was kidnapped by the Turkish state and executed. Media was one of the main actors in this process. Pro-PKK outlets such as the Cumhuriyet newspaper and news websites T24 and Diken news began publishing articles that supported and ignited these fiery claims continuously. Social media wasn't far behind, since almost every week there were repeated attempts on Twitter to push the hashtag "whereishursitkulter" onto the world stage and Turkey's top-10 trending list. Under the guise of non-governmental organizations (NGOs), pro-PKK organizations initiated petitions in response to Külter's disappearance on numerous platforms, including Change.org. One of those petitions reads:

"The State Department must release the location of Hurşit Külter immediately in order not to repeat summary executions and massacres as in the 1980s and 1990s while preventing the emplacement of the mentality from back then. According to principles of law, guaranteeing the right to life of citizens is the duty of the state. We await the State Department's shedding light on the situation by explaining the situation beyond all doubt and worry of the public and ask this question, 'Where is Hurşit Külter?'"

This statement, just like the news articles we mentioned above, usually implicates the State Department as well as the state itself as the culprit behind the disappearance. Selahattin Demirtaş, co-chairman of the Peoples' Democratic Party (HDP), took the stage in Parliament and gave a speech in which he accused the government and held a poster with a photo of Külter on it. Külter's mother was also convinced, joining the "Saturday Mothers" movement as a result. HDP parliamentarian Pervin Buldan also joined the movement in a show of support, sharing in the mother's pain and worry.

Almost every day, a columnist in Turkey wrote articles accusing the state of wrongdoing and asked the same question over and over again that we saw fit to put as our headline today: "Where is Hurşit Külter?"

Some other officials speculated, saying that Külter may have been kidnapped or killed by the PKK. Minister of National Defense Fikri Işık responded to questions in Parliament by saying that a civil inspector has been assigned to investigate the situation.

The issue quickly took center stage internationally. U.S. State Department spokesperson John Kirby said that they would conduct an investigation into the disappearance of Külter, who has been missing for 45 days. According to a news article written by İlhan Tanır who is known for his close ties with the Gülenist Terror Group, Kirby said:

"We're obviously aware of the report that states that the Turkish government has not responded to the U.N. High Commissioner for Human Rights' letter requesting permission for a U.N. team to conduct an investigation in southeastern Turkey to examine potential violations by the security forces during military operations in urban areas. We urge Turkey to allow effective investigations by Turkish prosecutors into civilian deaths and destruction of civilian property in Cizre and other towns in the southeast and give the U.N. and NGOs access to the area to document what is taking place. The last thing I would like to say is that we urge Turkey to take all feasible precautions, of course, to protect civilians and act in accordance legal obligations."

The international media wasn't slow to preach to the choir as well. Media organizations such as the New York Times, the BBC, Foreign Policy and Deutsche Welle published articles on the subject. Most of them had been duped by the pro-PKK campaign and attempted to paint the Turkish state as the culprit overtly or covertly, portraying Külter as a civilian completely unrelated to terrorists and chalking up his disappearance to the "evil Turkish state."

Some of these examples can be seen in Daily Sabah's news article "Külter's appearance in Iraq shows Western media, figures duped by anti-Turkey PKK smear campaign" that was published yesterday: "The FP praised Külter for being an administrator who 'believed in politics and not weapons, as a means for change'."

"The Deutsche Welle's article, 'The return of Turkey's 'dirty war' against the Kurds,' also accused the Turkish state of forced disappearances that have not taken place since the 1990s. The article insensibly labels Turkey's anti-terror fight as a 'dirty war' against the Kurds, failing to differentiate between the law-abiding Kurdish citizens of Turkey and PKK terrorists."

While these discussions ushered in a torrent of accusations of state terror from every direction, Külter appeared on Oct. 7 in the northern Iraqi city of Kirkuk, almost 120 days after his disappearance. He released a statement to PKK-owned Fırat News Agency announcing that he was alive.

He then told us the tale of those 120 days, and what a tale it was. It certainly rivaled that of "The Shawshank Redemption" in terms of fiction but was much less believable. He said that he escaped after being captured by police officers that had detained him, hiding in abandoned buildings. Apparently with the help of others, he managed to reach Kirkuk. These people remained nameless, for security purposes, of course, according to him. He also said that he had only just found a chance to speak to the press. Of course, none of what Külter said was verifiable, and his claim of "being unable to even reach his family due to limited communications" rang false in many ears -- even the ears of those who initially believed the story. The fact of the matter was clear as day: Külter acted with the PKK and lied about his own disappearance.

We repeated many times in this corner about the tremendous impact communication and transportation technologies have on today's media outlets, politics and world as a whole. There is only one explanation for failing to communicate when every square meter of the world has network coverage – billions of people own a cellphone and computer. That explanation is that people like him are simply playing dead. It is clear that Külter is a liar and a bad one at that. Külter played dead but since he hadn't really shuffled off this mortal coil, he failed to continue his silence and resurfaced with outlandish lies after a while.

It seems that this entire play was staged by Külter and others to help the PKK and the HDP by giving ammunition to the local and international arena that will assist in attaining the moral high ground and winning the propaganda war. The tale of a politician who fell through the cracks increased pressure on the state to help the PKK garner international support.

Chief amongst those deceived by this outlandish tale is the mother of Külter. Seemingly, a person branded by the international media as a freedom fighter and a valiant warrior for democracy is actually a person who would exploit his own mother without a second thought to support the terror organization he is a part of.

International media also tried to rectify the damage after Külter resurfaced. Let us look once more at the previous Daily Sabah news article:

"Ironically, Külter showed up at a PKK terrorist camp in Iraq, which trains militants to carry out attacks against Turkish security forces, schools and even hospitals in which many civilians are targeted.

The magazine quickly published a new article online, saying that the mystery got even weirder after Külter showed up in Iraq and questioned his explanation of the events, saying that those who believed his case now 'feel duped'.

'His explanation — an unlikely tale of detention, miraculous escape, and months in hiding — was scant on details." FP said, admitting its mistake on choosing to believe a terrorist organization rather than legitimate state officials.'"

Nevertheless, at the end of the day pro-PKK media in Turkey and a large part of the international media that published news articles on Külter's disappearance were used as a tool by the PKK willingly or unwillingly to deceive their readers regardless of any consequences. They have to apologize and revise their deceptive publications with accurate information rather than obscuring falsified information and glazing it over as they are now doing – if their journalistic goals are not based on propaganda, that is.
RELATED TOPICS