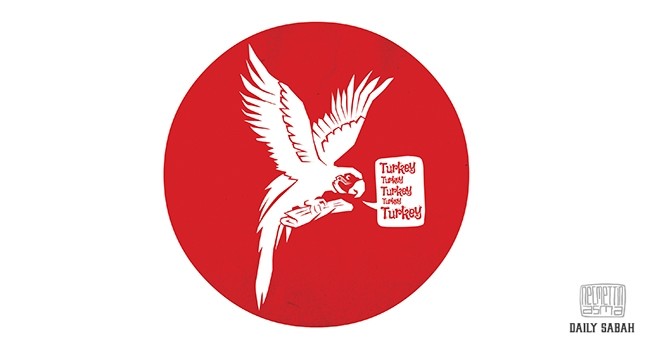 Once again we leave the old year behind and turn to the new one with new hopes and aspirations. But some of those hopes were immediately shattered, as Jan. 1 was filled with shock and sadness following the attack in Ortaköy, İstanbul. Terrorists aimed to crush our optimism and sow the seeds of distrust and hate between neighbors on a night of merriment. Our hope is that they were unsuccessful. After that, the largely foiled terrorist attack in İzmir came. So it is safe to say that Turkey's first foray into 2017 was not all we hoped it would be.

While solidarity in the country largely remains in place against these attacks, the response from abroad was lackluster, same as before. This time, the Western media dropped the pretenses in an effort to drive their viewpoint home regardless of whether it was accurate or not. Throughout 2016, we focused on this particular problem many times in Reader's Corner, and we will continue to do so this year. We will definitely write about it as long as foreign media sources try to lump the fault of the attacks on Turkey instead of simply expressing solidarity.

To be more precise, on Jan. 2, just a day after the Ortaköy attack, an article was published by the Independent: "This is the reason why we don't dwell on Turkish deaths in the West." The writer was none other than Robert Fisk. Fisk is a fairly well-known figure in Turkey, especially considering his previous articles on the July 15 coup attempt and the ongoing situation with the PKK; all of them stirring many criticisms. But let us try to forget about his previous work and focus on his most current.

The non-apologetic tone of the article well summarizes the intent behind it. One would expect that at least some of the blame for the attack would fall on the attackers, but it seems that the sole culprit behind the attack and the cause of the disinterested attitude of Western media is Turkey according to Fisk. There is a bit of lip service to possible underlying racist factors, but they are quickly glanced over to place the blame on Turkey's shoulders.

Daesh is mentioned three times in the article, and all of them are used to point out Turkey's supposed faults in the attack. Let's look at the first one:

"Then there are the military reasons. Hasn't Turkey been playing fast and loose in the Syrian war? Hasn't it allowed weapons and money to be funneled across its border to ISIS [Daesh] and Jabhat al-Nusra (aka al-Qaida, the murderers of 9/11 and the heroes of eastern Aleppo) and to various U.S. and British-backed 'moderates,'who can kill without apparently being 'jihadis'?"

Here, Fisk uses propaganda that has been proven false in an attempt to support his rhetoric. Not only does he throw in 9/11 here to stir up the feelings of his readers, he also disregards the lack of any meaningful evidence that Turkey supported Daesh with weapons or money. This has been used as a propaganda tool for some time, with allegations of Turkey buying oil from Daesh. Yet in December 2016, the CIA apologized to Turkey about these allegations. For more on this, please refer to the Dec. 23 Daily Sabah article titled, "US Ambassador Bass confirms CIA apologized to Turkey."

Moving on, we look at the second time Daesh is mentioned in the Independent article:

"Anyone who can bomb Kurds, while claiming to bomb ISIS [Daesh], who can demand that no power dare interfere in his country's 'domestic affairs,' while positioning Turkish troops in both Syria and Iraq [where Turkey's involvement outside Mosul is enraging the Baghdad government] is clearly walking a very dangerous path."

Fisk uses the People's Protection Units (YPG) and Kurds interchangeably throughout his articles, just like he does with the PKK. Both the PKK and YPG are considered terrorist organizations by Turkey. The article also tries to diminish the latest efforts of Turkey against ISIS despite their extensiveness.

Now the last mention of Daesh in the article:

"So what's next? More massacres? Of course. From ISIS [Daesh], Kurds, Marxists, you name it. More attempted coups?"

The cavalier attitude about some of the biggest terror attacks in Turkey's history is palpable. The article also previously mentioned the coup attempt's main culprit as "claptrap about Gulenists." The pattern is quite clear: It seems that any time a terror attack takes place in Turkey either there is some nonsense that a terrorist is responsible or Turkey is to blame.

Of course, Fisk is not alone in this effort to marginalize Turkey instead of showing support following terror attacks. Many of the Western media sources dust up their "Sultan Erdoğan" articles with handpicked references that suit their rhetoric. They all seem to carry similar sentiments such as "Yes it is sad, but Turkey…" In other words, they blame the victim instead of condemning the one who pulls the trigger.
RELATED TOPICS