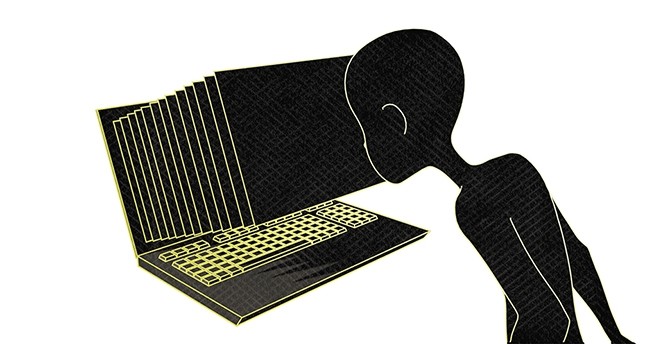 With invasive and obstructive advertisements on news websites becoming one of the most common reader complaints, let us look at Daily Sabah and how it fares compared to the majority of Turkish newspapers

If we were to hold a poll about the complaints of readers when it comes to newspapers in Turkey, the problems with their websites would likely rank pretty high, right after the complaints borne out of political differences.

This week, we will look at a couple of the most common criticism that readers express when it comes to their experience with news websites and how Daily Sabah fares in that regard.

Before getting into it, however, a little background would not be amiss to understand the motivations that lead to the said problems. When the internet became intensely popular at the beginning of this century, it was not long before many platforms realized that it held untapped potential, limited only by one's imagination. The world we live in today is the result of that vision, after all.

One of the most obvious potential uses of websites was advertisement venues and even after all these years, this appeal has not diminished one bit. Newspapers were a bit behind in this race and for a long time they considered their websites a novelty, an inferior platform that contained the content of their printed versions.

However, time showed that news websites were growing at an unseen rate, getting closer to toppling their printed counterparts from their primary position. Newspapers were late to realize this development, and whether this happened because of inexperience in the new medium or because of a desire to hold on to the status quo is up for debate. But being late to this gold mine caused the news websites of Turkey to jump in with both feet, without much long term plans other than countering the diminishing popularity of the mainstream media.

It is important to understand this because the problems that still persist today with presentation on news websites stems from the abovementioned mentality. The chief complaint that readers seem to have is the advertisements, or more precisely, their excessive presence and tendency to obstruct readers from accessing the news without first jumping a couple of hurdles.

I am also sad to say that after years of experience in news making on the internet, the news and ad balance on websites still eludes most newspapers.

A couple of examples to these problematic advertisement methods are:

The ads that start to play automatically with a blaring noise and an elusive close button.

The ones that obscure the entire page and make it impossible to read news articles.

The ones that distract or confuse the reader with inadequate distinction between news and ads.

The frequently refreshed pages followed by a new set of advertisements all over again.

I can list these just from the top of my head and I am sure that many readers will remember the hard times they had with these types of ads and more.

However, demonizing the ads is not the solution either. After all more ads means more revenue and more revenue results in increased funds. If used appropriately, these funds will also mean better service for the reader. This can be technical, such as better servers, or content based, like new editors, reporters, correspondents.

Ads signify success in some way.

Yet the increased ads, if placed inappropriately and obstructively, like the examples above, actually do not signify success, but the opposite. An ad in a printed newspaper has simple parameters. Its reach can be deduced from the newspaper's circulation. But the revenue ads on the news websites are not that straightforward. After all, with intrusive ads also come Adblockers, software and extensions that aim to provide users with an ad free experience. With every reader driven to frustration, Adblockers gain an additional user which in turn means less ad revenue.

Of course, the webmasters had an answer to these Adblockers. They found a way to block access to users who use the Adblockers until they disable it for their websites. To which the Adblockers responded with an extension that hides whether users use an Adblocker or not.

Do you see the pattern? It is a continuing fight between the reader and the website, which could be avoided with a simple and sensible ad placement plan. Printed versions have one right? Do you see an entire front page covered in ads that require you to continue to the second page to read the headline of the day? Of course not. Why not do the same on the websites then?

Also it is important to stress that blocking access to users who employ an Adblocker is not a viable business practice. Not only can such things be bypassed but it can also easily result in to readers journeying to greener pastures. Nobody is irreplaceable in today's globalized market and even if you were a monopoly that could set your own rules, it would only be a matter of time until another came in and took advantage to swoop up the disgruntled users.

This pattern does not stop here either; it has caused another bit of a problem that is a major source of complaints. With the excessive ads that hamper the reader's experience, many of them adopted a routine of not delving further than the main page of news websites. They simply read the headline of the news articles and avoid clicking on them lest they fight an onslaught of ads. Web editors responded by making headlines as obscure as possible, even going as far as blurring images so that the reader is forced to click on the article to even get the faintest idea what it was about.

This caused a rise of misleading titles and photos with the sole purpose of attracting attention. Not only is this a negative factor when it comes to a newspaper's credibility, it is also problematic from the perspective of journalistic principles.

The readers' reluctance of not going further than the home page of news websites had another negative effect. The designers were forced to cram as much as they can to the home pages with slider after slider along with individual news banners in every nook and cranny. It is aesthetically displeasing at the very least, not to mention that with all the ads flittering about, it is difficult distinguish between them and actual news articles.

Another common complaint is about the gallery sections that most news websites adopted wholeheartedly thanks to its high contribution to page hits. However, what is a useful method for presenting image-heavy news turned into a method of grabbing as many hits as possible with text-heavy news articles partitioned into 15 small sections that require a reader to click 15 times to read the entirety of it — along with mostly unrelated and unnecessary images of course.

The pattern so far can only be described as a chain reaction, which all circles around the same problem of failing to find a balance between revenue-based content and news-based content on the news websites, a problem that most news websites in Turkey continue to experience.

Thankfully though, ever since its foundation, Daily Sabah's website has managed to avoid these pitfalls with a sensible advertisement plan, with simple top and side banners as well as clear and descriptive headlines that entice readers to click for more content and not because it hides the actual piece of news. The gallery section also covers stories that rely on the images to get their point across and the selection of images clearly shows that thought went into them with a certain expectation of image quality.

Even though we look at our own newspapers, when the situation demands it, because of a letter or a complaint, it is important to emphasize the parts that it gets right and this week's subject is definitely one of them.
Last Update: Apr 24, 2017 1:39 am
RELATED TOPICS