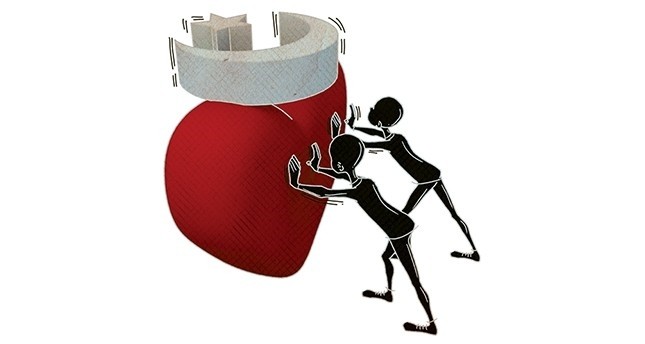 As we commemorated the first anniversary of the July 15 coup attempt, it is high time that we as media realized the mistakes in covering the aftermath as well as the court cases and act accordingly from this point forth, all the while not forgetting the names of that night's heroes

Last week, we commemorated the first anniversary of the July 15 coup attempt with marches, rallies and by paying visits to the resting places of the martyrs who lost their lives on that fateful night.

In a sense, it was the longest and the shortest night in recent Turkish history, bearing witness to the heroic actions of the people who, having grown tired of being the victims of tragedies, decided to rewrite Turkey's future and become a part of history themselves.

Whether you call it a terror attack, a revolt, a riot, an insurrection or a failed coup attempt, the night of July 15 was a night that the Turkish people, as they descended on the streets like a white cloud over a dark night, made a bold statement that the machines of war would never spread fear in their hearts.

As if inspired by the national anthem, "Render your chest armor and your body bulwark! Halt this disgraceful assault!" the people of Turkey put their lives on the line to uphold their honor and dignity; refusing to hand over our country to a bunch of murderers.

With the president at the helm, coordinating with the patriots of the armed and police forces, they dismantled the curtain of deception and lifted the veil with their bare hands.

It has been a year and a week since that night, and the majority of people with alleged ties to the coup attempt have been arrested. Criminal proceedings against them are still ongoing in courthouses across the country.

Meanwhile, in the run-up to the anniversary of the coup attempt, news articles across visual and print media, covering the event and its aftermath, easily numbered into the thousands. Unfortunately, however, some of these reports, rather than bringing the truth to light, served to obscure or cover it up, leading to confusion among the readers.

You may ask yourself how this happened but what we need to remember is that we are dealing with an organization that knows no limits and no compunctions when it comes to reaching its goals. They use every avenue of deception and the events leading up to this day offers more than enough proof. We are talking about people who use "assumed identities" for years. For them, lying comes as easy as breathing and last year these individuals showed their inner monster by gunning down their own countrymen without any second thought.

Considering all these what might be the purpose behind printing and airing each and every statement by the coup perpetrators, without employing any filtering, cross examination, fact checking and confirmation mechanisms?

By doing so, the media runs the risk of turning into a mouthpiece of putschists. I have always said that journalism is more than simply going through court files, indictments or defense pleas. Journalists and newspapers must conduct their own investigations, research and fact checks. Unfortunately, these mechanisms are being underused.

HeroesAnother failure of the media was see in their coverage in the wake of the coup attempt. Post-coup media coverage could be summarized with the following statement, "Mom, why am I not seeing my father in the news? Wasn't he a martyr, a hero?" The question was raised by a five-year-old daughter of one of the martyrs of July 15. One with a name that went unknown to the general public.

The heroism of Ömer Halisdemir changed the course of that night. He became the Hasan Tahsin of July 15. Erol Olçok and his son Abdullah were people many of us knew and held in high esteem. Mustafa Cambaz was a dear colleague and his loss still pains us.

Some of our friends were among those who lost their lives or were wounded that night. Naturally, they were at the forefront of our minds when we sat down to write our articles and cover July 15 and its aftermath. After all, that is how the human mind works and as a Turkish proverb says, "an ember burns where it falls.

Let us not forget that everyone who was martyred and wounded that night was united in purpose and made the ultimate sacrifice in order to protect their nation. Our closeness to some of them should not become a cause for us to overlook the rest.

Martyrs and veterans should not become just a number in our minds; they are more than statistics that are drawn upon when in need. Every one of them should be remembered. This is not an isolated problem with the July 15 martyrs and veterans, either. The same consideration must be taken for all martyrs, veterans, and victims of terrorist attacks. We should be careful to not downplay their sacrifices and let them fade into obscurity.

Lastly, as a side note, I would like to commend the giant screen installed in front of the newspaper to commemorate July 15. It has received positive feedback from many of our readers.