Pursuing facts in the post-truth era 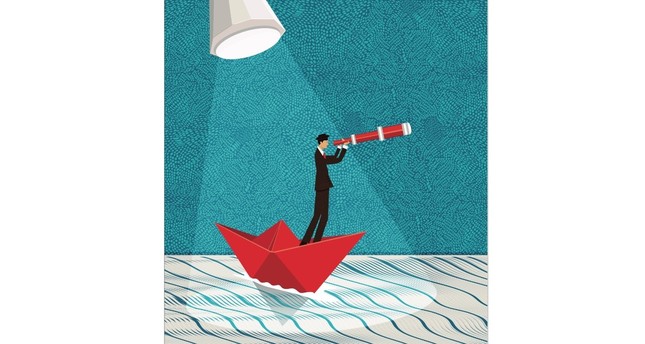 Although it is very easy to spread lies on social media, debunking these falsehoods is an entirely different matter, as demonstrated by a recent attempt to find the true story behind a false quotation

If we look at the Reader's Corner articles that have been published until now, one of the most frequent sayings we used would probably be, "A lie can travel halfway around the world while the truth is putting on its shoes."

It is a succinct saying that summarizes the current situation in the media, both conventional and social. We looked into both the causes and effects of the problem in mainstream and social media many times before. And we are not alone in that regard either. When it comes to exposing and correcting the lies appearing in conventional media, we have somewhat an easier time. After all there are two possible outcomes of any given situation.

Either the publication corrects its error, or it loses credibility. And losing face when being called out for mistakes is usually enough incentive to be careful when publishing and checking news articles. Not to mention that most of the news organizations possess some form of editorial oversight and fact checking, cutting down on the errors. Social media however shares none of those characteristics.

When it comes to combating the lies on social media, it is always about playing catch up. After all, lies are much easier to utter than the truth. Just like it is easier to destroy than build. When you have no burden of proof lying on your shoulder, you can lie at a rapid pace. While those people who want to try to find the truth scramble for research and rebuttal, the damage is already done.

We are living in a post-truth era where perception is infinitely more important than the truth as far as society is concerned. The most visible effects of this new paradigm can be observed via social media but blaming these platforms alone would be misguided. As much as it amplifies the circumstances, social media also provides us a window into the minds of its users. Thus we see effects more clearly than ever before as people gain courage in their echo-chambers.

Today, I would like to share an example on combating the lies on social media and how tremendous an effort that can be. This story, "What can a single social media lie can cause?" about the pursuit of truth was published back on May 21, on the news website, World Bulletin.

Our story starts with a paragraph that included a picture of a woman who claimed to be a nurse. Supposedly it was a quote from a book called "Aleppo Memoirs" by Dr. W.H.T. Squires. I will not post the entire paragraph here but the gist of it was this.

Supposedly this woman serving as a nurse in Aleppo witnessed an event where Arab soldiers attacked the hospital she was treating Turkish soldiers during World War I. The attackers then stabbed the wounded Turkish soldiers. Overcome with grief, the nurse went out of the hospital in tears. That same day, English forces entered Jerusalem and the local Arab populace celebrated the event that day. In short, it was a paragraph about treason suffered by the Ottoman Empire at the hands of the local Arab populace.

Before going on any further, I would like to remind you that we are not talking about the wider historical aspect of the situation. This is about a single quote being spread across social media.

Now this image made the rounds on various social media platforms until it found itself posted in a WhatsApp group chat. One person in the group was İhsan Elhan, a member of the founders' committee of the Boğaziçi Managers Foundation. He thought the language of the paragraph consisted irregularities and did not resemble other texts of the time. He went on to uncover the truth behind it.

It was long and a costly journey as well. At first, he went on to look for a book called "Aleppo Memoirs" written by a Dr. W.H.T. Squires. His search was in vain despite trying several sites from the Turkish Kitapyurdu online bookstore to Amazon. He used different keywords in case there was a mistranslation of the book's name. Yet his search was in vain.

Most would give up at this point, letting it slide rather than taking a swing at it but Mr. Elhan continued to pursue the matter. He went on to search the books at the U.S. Library of Congress, the largest library in the world. Yet, this too was in vain.

He then encountered the first reference in "ekşisözlük" a Turkish website that is a cross between Reddit and Urban Dictionary. Here, the reference was to an article titled "How we lost Jerusalem" that was published in a Turkish magazine back in February 2017. Here, the story was largely the same but with a key differences and clarifications. Dr. W.H.T Squires was not the woman as implied in the original social media post but rather he was a man that included a Catholic nurse's account in his book. And the story did not take place in Aleppo but rather in Jerusalem.

The magazine article in question included a key reference that unlocked the next stage of research for Mr. Elhan. That reference was, "The Egyptian Expeditionary Force in World War I: A History of the British-Led Campaigns in Egypt, Palestine and Syria (Nov. 9, 2010 by Michael J. Mortlock)."

This referenced book was not the elusive "Aleppo Memoirs" but it was a good start and he ordered it to continue his research. Squires was mentioned a couple times in this new book and the book's references revealed the name of the initial target.

It was a book titled "Peregrine Papers: A Tale of Travel in the Orient" by William Henry Tappey Squires. Armed with the correct designation, Mr. Elhan returned to the Library of Congress to check whether there was a book by the same writer named "Aleppo Memoirs" or something similar. There was not. Confident that he found the right book despite the different name, he ordered this book that was published back in 1923. After a thorough reading, it turned out the nurse in question was Mrs. Vester and the supposed event in the original social media post did not exist. Here were the facts:

Squires was an American doctor and missionary. Mrs. Vester was not a Catholic nurse as it was said in the magazine article but rather the wife of Fred Vester, an important trader of the city. She also worked as a Red Cross nurse.

The only tears Mrs. Vester shed were during the entry of an English officer to the city on his horse.

It took a great amount of time and $40 for İhsan Elhan to find the truth behind a false and manipulative quote shared extensively on social media. It required money, time and research to debunk a single piece of false information that had been littering our Twitter feeds and Facebook pages. Spreading this false information however probably took only 15 minutes or so. And that is being generous.

I thank and congratulate Mr. Elhan for his due diligence and tremendous amount of work he put in to debunk a false quote. This is the critical thinking necessary in the post-truth world we are living today if we are to remain vigilant against manipulation.

It is a story both inspiring and disheartening in a sense. On one hand, the initiative and critical thinking here is inspiring and can cause others to adopt a similar outlook when it comes to other pieces of information gained from sources that lack credibility. On the other hand, it clearly showed the necessities of debunking the falsities surrounding us every day and that might cause some to feel hopelessness to ever overcome the age of post-truth.

However, I remain hopeful. If more of the users adopted a similar approach of suspicion when it comes to unverified information, at the very least the spread of falsehoods like this would be severely limited. And the first step would be cutting the circulation to prevent others from encountering and sharing misinformation.