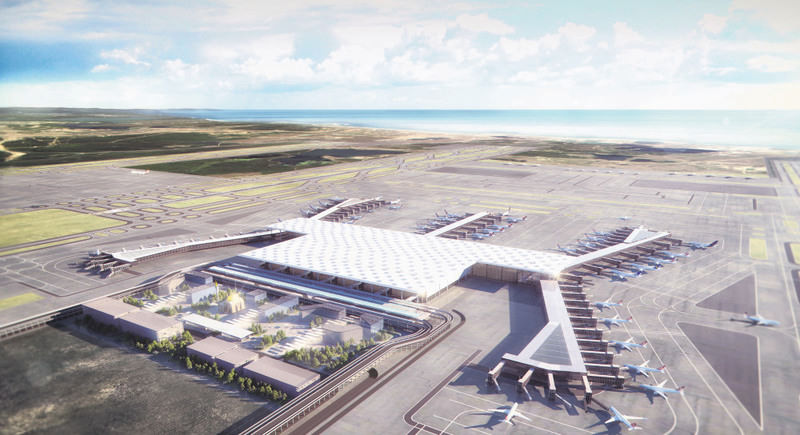 A model of Istanbul's third airport (above), which is estimated to cost 10 billion euros, is pushing the real estate prices up in the region.
by Seda Tabak Jul 22, 2015 12:00 am

Maya said that the region adjacent to Durusu (Terkos) Lake is located in the immediate vicinity of the airport project but it does not have a zoning plan in some parts, which makes the land on the northern side of the lake more expensive. According to the construction plan, the minimum parcel of land has to be 1,500 square meters. These parcels are given an 18-percent construction rate and three-story buildings can be built on them. The sale price of one square meter of land was around TL 300 two years ago, but has reached around TL 550 recently. The price of unplanned parcels of land in the region was between TL 70 and TL 100 two years ago, but has reached around TL 250.

According to Maya, the construction plan of the Tayakadın district will be prepared by the Environment and Urbanization Ministry, as it is within the project area. She said the district poses risks for investments, although land prices have risen rapidly after the airport project was clarified. The price of one square meter of unplanned farm-land-quality real estate has risen to around TL 400 from TL 200 two years ago.

Explaining that the third airport and third Bosporus bridge will be at the intersection point where the Northern Marmara Highway and Kanal Istanbul projects coincide, Maya said one of the two urban projects to be carried out in Istanbul will be in the Karaburun district. If the Northern Marmara Highway is finalized in a short time, main linking roads in the districts of Silivri, Çatalca, Boyalık, Göktürk and Zekeriyaköy will gain importance, pushing prices up by nearly 30 percent.

The construction of the third airport is expected to be completed in four phases. The first phase consists of the construction of two runways and the main terminal, but with the completion of all the four phases, the airport will include four terminals connected with a rail system, eight air traffic control towers, six runways, 16 taxiways, a hangar of 6.5 million square meters with a capacity of 500 aircraft, and a capacity to handle 150 million passengers annually, making it the world's largest airport.

The airport will be connected to the Istanbul metro and multi-lane highways will be built to facilitate access. The airport is expected to take on 120,000 new employees once it opens, which is expected to be in 2018.
Last Update: Jul 22, 2015 11:05 pm
RELATED TOPICS