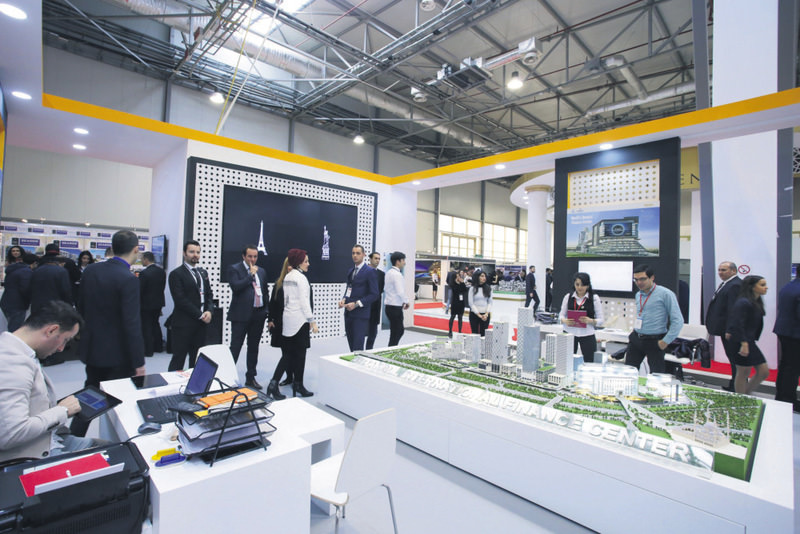 by Seda Tabak Dec 19, 2015 12:00 am
The construction sector has opened up to new markets and sold 18,567 real estate properties to foreigners in the first 10 months of the year. In addition to Gulf countries, the sector is particularly appealing to Azerbaijan, with 645 Azeri investors having bought real estate in Turkey - which makes the country rank sixth in the sector's foreign sales market. Considering this data as an opportunity, the representatives of the construction sector have turned their attention toward Azerbaijan. A total of 38 companies from the construction sector participated in the Azerbaijan International Real Estate and Investment Exhibition RecExpo, which was held for the first time in the Azerbaijani capital of Baku this year. A total of 52 construction firms received demands for, as well as sold real estate during the three-day fair, which was inaugurated Thursday.

The Ağaoğlu Group, which has constructed 7 million square meters of real estate and more than 30,000 units in Istanbul over the past 35 years, has decided to open up to the rest of Turkey. Halisdemir said the group will invest in various Anatolian cities as well, particularly those where foreigners take the most interest. "We will realize large-scale projects that will include not only apartments, but also offices, shopping malls, schools and hospitals," he added.

Suggesting that bureaucratic processes should be reduced for sales to foreigners, Halisdemir said foreign investors purchasing real estate in Turkey should be granted residence permits and citizenship rights. "Just as we have entered the Middle Eastern and Caucasian markets, we aim to turn toward the Western market. We should organize road shows abroad both at the company and country levels," he said. The Ağaoğlu Group will soon engage in talks with Western funds for its senior citizen housing project.

According to Halisdemir, one of the major parameters that determine real estate prices in Turkey is housing loans. The current data regarding such loans indicates that real estate prices will continue to soar. Currently, mortgage loans constitute 7 percent of all bank loans, Halisdemir said, adding that this ratio is up to 50 percent in developed countries. Moreover, according to Halisdemir, it is likely that real estate prices will continue to rise until the use of mortgage loans increases to 35 percent in Turkey. Stressing that economic development starts with rapid housing development around the world, as can be most visibly seen in Germany and the U.K., Halisdemir said the housing sector pioneers all other sectors. "We see that countries that securitize real estate grow rich, but there is currently no leverage to do so in Turkey. We have a long way to go," he added. Halisdemir also said the Ağaoğlu Group's projects appreciate by 25 percent on average on a yearly basis, and he invited foreign investors to take advantage of this gain.

The construction company Kuzu İnşaat introduced its Sea Pearl Ataköy project, which is located on the Ataköy coast in Istanbul, during the exhibition that brought together leading construction projects from Europe, the Middle East, the Gulf region and the Caucasus. Kuzu İnşaat board member Özen Kuzu said the company sold more than 20 properties to the Azerbaijanis during the exhibition. Azerbaijanis are attracted to Istanbul where they take interest in luxurious housing projects in the central parts of the city. Additionally, project diversity in the real estate sector, the dynamic structure of the sector and the reciprocity law are other factors that attract foreigners to invest in Turkey. "As foreigners purchase real estate in growing amounts with every passing day, we attach great importance to introducing our projects to investors via international platforms," Kuzu said. According to Kuzu's statements, Azerbaijan is one of the five countries that invest in the real estate sector, particularly in Istanbul and on the southern and western coasts. Kuzu said following real estate fairs in Dubai and France, the Sea Pearl Ataköy project attracted great attention during RecExpo as well. The 4.5+1-type properties were greatly appreciated by Azeri investors in particular.
RELATED TOPICS